I have to confess I currently live in Omaha, NE and I have had many of my Husker friends ask me to write on the Huskers and Coach Miles. Many have wondered how Coach Miles has turned around this program so quickly with little talent. First of all that is a myth. Miles has three really good Big Ten players in Pitchford, Shields and especially Petteway. Those three players have developed into solid players with enough talent to compete in the Big Ten. More importantly, Nebraska has been able to develop its role players with Benny Parker and Leslee Smith logging important minutes and giving Nebraska some ups in the intangibles department. On top of that, Miles has the Huskers playing solid defense. That always helps. Finally, the new Pinnacle Bank Arena is a great home court advantage and has given Nebraska a sense of identity.

From a coaching point of view, I have been very impressed with the coaching adjustments by Miles. Early in the week when they played at Illinois I was disappointed with the lack of movement and over dribbling of the Huskers. On Saturday vs. Northwestern, Coach Miles made a great adjustment and had great ball movement which allowed for the Huskers to penetrate and score or kick to the open roller or shooter.

What is this offense you say? It's commonly known as the ball screen attack. A little history lesson; it was created by Tod Kowlaczyk who is currently at the University of Toledo. When he was at Wisconsin-Green Bay, Kowlaczyk devised this ball screen continuity.

The offense starts with the point guard, Benny Parker, passing to the wing. In this diagram #44 Terran Petteway is on the wing. Parker will cut opposite and #34 Walter Pitchford will come and set a ball screen for Petteway. Petteway wants to get to the paint and Pitchford will set the screen and roll or pop. Pitchford is great for this offense because he can post up or shoot the jumper off the pop. If Petteway does not have the drive he will pass to #2 David Rivers. Once Rivers catches the ball #31 Shavon Shields will cut back door which is a decoy allowing Parker to slide up and receive the ball. 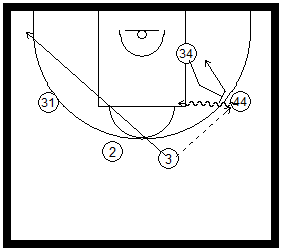 Once Rivers passes the ball he will go set a ball screen for Parker and Pitchford will replace Rivers at the top of the key. Parker will once again try to penetrate the paint and if not he will pass to Pitchford. Once Pitchford catches the ball, Petteway will cut backdoor, and Shields will slide up and get the ball screen. This is the continuity of the offense. 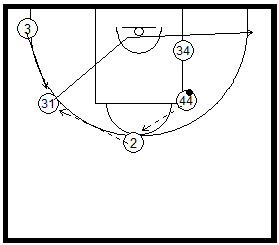 Kolwaczk intended for this offense to be a high-low look, meaning that when the post at the top of the key caught the ball he would look to the post for a high-low look. Miles wants this offense to play fast and as you watch the clips I have posted you will see the Huskers run this offense very fast. This first clip starts at 18:24 left in the second half. As you see Shields starts the ball screen attack out of transition. The ball screen happens by Shields dribbling to the wing. After a few reversals Rivers picks and pops for a shot. 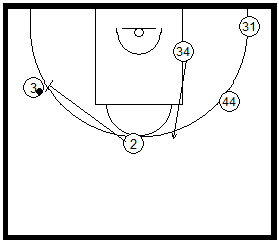 The second clip of the ball screen attack happens with 17:25 left in the 2nd half. Once again Petteway starts this in transition. You can see him pushing Parker to the other side to interact with the ball screen. Pitchford sets a good screen and rolls and is fouled.

The last clip for the ball screen attack is another good set with regards to ball reversal. The ball is reversed a few times and eventually Pitchford goes back to Ray Gallegos for an open look. This happens with 7:25 left in the 2nd half.

Once again, notice in these clips that the ball screen attack is initiated via transition offense.

If all else fails the Huskers like to run a high ball screen for either Petteway or Parker at the top of the key and let those two attack. This clip shows Petteway using the high ball screen. It happens at 9:08 left in the 2nd half.

It is also important to note that Miles did a great job of going to a 2-3 zone in the second half when the Wildcats were scoring frequently versus the Husker's man-to-man defense. This was a great way to give the Wildcats another look and helped Nebraska to the win. I am interested to see how the Huskers will finish out the season. Will they make the NCAA Tourney?