A promising start to the season soured quickly, escalating into a tough late-season losing streak for the 'Cats. Before we turn to football, let's take one last look at Drew Crawford and the 2013-14 NU basketball team.

Share All sharing options for: Northwestern Basketball: 2013-14 In Review

Pessimists will point to Northwestern's key seven-game losing streak and its 349th-ranked offense (out of 351 D-1 teams) in labeling the season a failure. After all, how could a 14-19 season (6-12 in the B1G) that culminated in a 76th consecutive season without an NCAA berth be considered a success in any way, shape or form?

But let me ask you this, pessimists: Where were you when Northwestern beat then-No. 14 Wisconsin back in January? Or when Drew Crawford swatted away Ronnie Johnson's last-second heave in that crazy 63-60 double-overtime victory over Purdue, a game in which the 'Cats established themselves as a defensive powerhouse, at least for the time being. Don't forget the upset over Iowa in the first round of the Big Ten Tournament either, or Drew Crawford's last game at Welsh-Ryan Arena. (Don't remember the actual game, though–just remember the pregame ceremony.)

Personally, I can't pin down my favorite moment of the season, but I can recall the one that's most memorable. Ironically, I don't remember the exact context of the event, but its message still rings true.

The moment occurred during Northwestern's loss to Penn State on March 6, when the 'Cats seemed to set a host of records for offensive futility.

In the midst of a 15-point first half, Chris Collins turned to his army of assistant coaches–seriously, there's almost as many suits as jerseys on the NU bench–after Kale Abrahamson missed a wide open layup, and you could read his lips: "What am I supposed to do?"

It was a statement that Collins couldn't say in his postgame press conferences, but nevertheless generally implied after most losses. It wasn't so much a dig at his players as an acceptance of the B1G's rigorousness and punishing nature.

"If my players can't convert on easy scoring opportunities, how can we beat these juggernaut teams?"

It's a sentiment that NU fans undoubtedly thought to themselves on a number of occasions, though the frustration stemming from the lack of offense was tempered by one of the best defenses not just in the B1G, but across the nation.

Much of that success came as a result of Collins' realization that his team simply didn't possess the athleticism or even true ability to beat the best of the B1G if it utilized Collins' preferred upstyle tempo. With the move away from Bill Carmody's Princeton offense, it seemed that Collins would bring a faster, wide-open approach–but soon after the season began, the former Krzyzewski disciple began to stress the value of slowing it down.

For the first part of the season, that strategy worked wonders. On Feb. 1, Northwestern was 5-5 in the B1G, trailing only Michigan, Michigan State and Iowa in the standings, and Collins was being labeled as a miracle-worker.

But then it all unraveled–quickly. A few losses turned into a downward spiral that cost Northwestern an NIT spot and put the team out of the postseason.

Did the hot start create heightened and perhaps even unreachable expectations? Probably. But could it have been worse? Certainly. Remember, there was some doubt that Northwestern could win more than a few games in B1G play after the 'Cats lost their first three in-conference games by a combined 76 points; they won six overall.

But you know all this. And you know that 2014-15 holds the promise of a better season and even a chance for some postseason basketball. Let's take a quick look, just to whet your appetite:

What to Know About 2014-15 Northwestern Basketball

Vic Law and Bryant McIntosh Are the Real Deal

Law just might be the best recruit in Northwestern basketball history, if not the most significant, but that alone doesn't tell you all you need to know about him. For one, he'll be an immediate contributor next season, thanks to a variety of tools that make him a scary opponent.

What jumps out at you the most is that Law is 6'6" but also plays on the wing. He's very versatile, with the ability to score with relative consistency from just about everywhere on the court. It's not often that you see someone who can run the floor while also playing with the size and athleticism to regularly score inside.

Meanwhile, McIntosh recently pulled off a second consecutive Indiana state championship with his high school team, meaning he'll bring a winning attitude on top of his impressive skill-set. Passing comes naturally to the 6'4" guard, who averaged 9.1 APG this past season. McIntosh isn't the strongest player, so the B1G's physicality could be overwhelming at times, but he should develop into a key player on the NU squad for awhile. 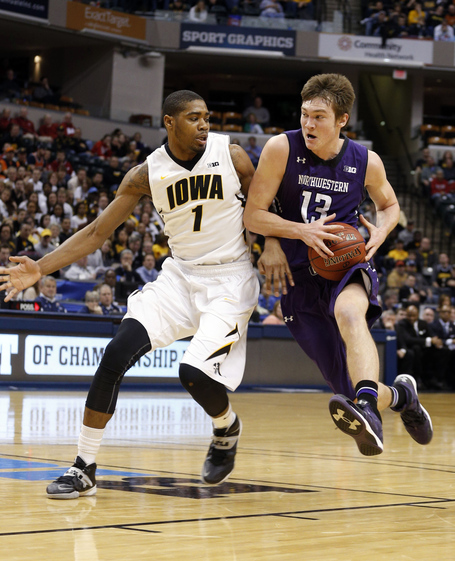 Lost in the madness of the NCAA tournament was the news that Kale Abrahamson, Northwestern’s sophomore forward, will transfer following a season in which he struggled with inefficiency and never really looked to fit Chris Collins’ system.

Abrahamson shot just 36.1 percent from the field in 2013-14, though he was relatively efficient from beyond the arc at 35.1 percent. He’ll have a chance to contribute elsewhere, but the real implication of the move is that it frees up an additional spot for Collins to bring on another contributor to better fit his up-tempo style.

Redshirt freshman Aaron Liberman, he of the Yarmulke-wearing fame, is also gone, a decision made easy by his lack of playing time this past season–he appeared for all of nine minutes.

That's now four transfers under Collins' tenure, thus freeing up a couple of roster spots to bring in some much-needed big men.

Adjusting to life without Drew Crawford, the cornerstone of the program for the past few years, won’t be easy. But with a more-than-capable replacement (Law) coming in to shoulder the burden, the team will still be in okay shape. We'll see whether Law can act as the go-to scorer this season in Crawford's absence.