Everybody strap in. The line for the roller coaster starts here.

Share All sharing options for: Recapping the 2013-14 Indiana Hoosiers

A year that started with lots of hope and some promise ended up falling well short of expectations, and missing the postseason with a competent team for the first time under Coach Tom Crean. This is the story of Indiana Men's Basketball in 2013-14.

The Non-Conference Schedule (Scares, Surviving, and Signs of Trouble)

The year started fine, with an easy 100-72 win over Chicago State. The second game against LIU-Brooklyn was the first concerning note, as the Hoosiers eked out a 1 point win against a team that would finish the year 9-20. Indiana would get back on track to blowout Samford and Stony Brook, and win handily against Washington in Madison Square Garden in the 2K Sports Classic. They would go on to lose by 1 in the final of the Classic, against a small school from the Northeast called UConn. You may remember UConn as the recent winner of the National Championship.

The rest of the non-con contained many expected blowout victories, a not-so-surprising thumping by Syracuse in the Carrier Dome, and a very disappointing loss to Notre Dame in the Crossroads Classic in Indianapolis that suggested this season would not go as well as we had hoped. Soon, it was nearly the New Year, and a game against Illinois on New Year's Eve would open the B1G slate. The non-con record for the Hoosiers: 10-3.

Opening the conference year in Champaign, Indiana had a shot to win in regulation, but Evan Gordon failed to make a buzzer-beating jumper, and the Hoosiers would go on to lose in overtime. They came home to get crushed by Michigan State, and followed that up with a 3 point squeaker at Penn State, their first conference win. Everyone expected that Indiana would still be in trouble, as Wisconsin was coming to Assembly Hall riding a long winning streak against the Hoosiers. So, of course, Indiana shocked the Badgers, breaking the Bo Ryan mystique (if only for a while). Riding high off the Wisconsin win, the Hoosiers turned around four days later and fell flat on their faces against Northwestern in Assembly Hall as well. A close loss at Michigan State was followed up by some nice payback against Illinois at home, which preceded a loss at Nebraska, which led to an 11 point win at home against Michigan. The yo-yo finally stopped, but in the wrong way for the Hoosiers, as a three game skid at Minnesota, home against Penn State(!), and a blowout at Purdue dropped the Hoosiers to 4-8 in conference play, with a must-win game against Iowa upcoming. The roof looked like it was about to cave in on the Hoosiers. And then it did. 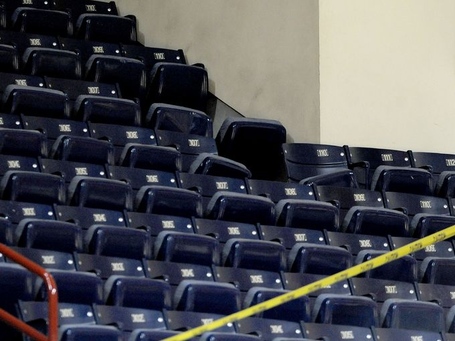 A piece of metal popped loose from the inside of Assembly Hall's roof, causing that evening's game against Iowa to be postponed for 9 days. In the mean time, Indiana split games with Northwestern and Wisconsin, getting revenge on the Wildcats for earlier in the season, while also taking a fairly expected loss at the Kohl Center. The return of Iowa to Bloomington provided another solid win for the Hoosiers, and Ohio State's trip to Assembly Hall gave the Hoosiers another good win, as well as some hope of sneaking into the NCAA tourney. Alas, that win against the Buckeyes would be the Hoosiers' last on the season. Nebraska came into Assembly Hall and completed the sweep, and the season finale in Michigan wasn't as sweet as last year's trip for the Hoosiers. Then, the tiebreaker against Illinois in the Big Ten Tournament signaled the death knell for the Hoosiers, as a loss knocked them out of NIT contention. The final conference record: 7-11, leaving the Hoosiers at 17-15 overall after the Big Ten Tourney.

Following the season, a mass exodus from Bloomington left the roster in a state of confusion for 2014. Seniors Will Sheehey, Evan Gordon, Jeff Howard, and Taylor Wayer graduated, freshman sensation Noah Vonleh declared for the NBA Draft, and Jeremy Hollowell, Jonny Marlin, and Austin Etherington all transferred out of the program. As recently as last night, a rumor suggested Tom Crean might be under consideration for the Tennessee job.

So what are we to make of this season? It obviously didn't live up to expectations, but it had some very strong positives as well. I think I speak for most IU fans when I say the sooner we forget this season happened, the better. And that is the true recap of the Indiana Hoosiers this year.