Summarizing (mostly) everything new about the Big Ten because you already know who James Franklin is.

Share All sharing options for: The B1G Changes in 2014

2014 is a year of change in the Big Ten. There's the playoff system, new divisions, new bowl games and most importantly: new schools. You probably already know the basics: Maryland, Rutgers, Holiday Bowl, Death to the BCS, James Franklin, East v. West etc etc etc. But how much do you really know? Let's just break it down piece by piece and see how much the Big Ten and college football are different this season.

Let's talk a little about the new guys. The Maryland Terrapins (it's a turtle) and Rutgers Scarlet Knights (it's a white guy wearing a suit of armor that's red) join the Big Ten at the beginning of the 2014-2015 academic year; I believe they formally join on July 1st. They bring 20ish varsity teams to the table and are located outside of major metropolitan areas on the East Coast. That second factoid is important to the Big Ten for obvious reasons ($$$$$$).

Maryland is officially known as the University of Maryland, College Park and has an enrollment of 37,000 or so. If you're not in the know the College Park refers to the city it's located in (DERP?). So where is College Park? Well, here's a nice map: 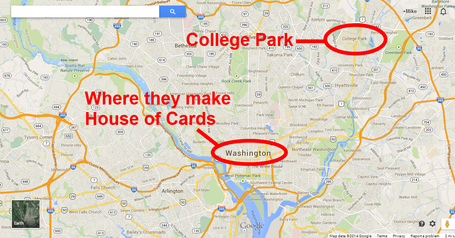 As you can see, UMD is around 9 miles away from the capital of our great nation.

Regarding football, the Terps enter the Big Ten under fourth year head coach Randy Edsall. Yes, he's the guy who used to coach UConn. I won't go into the details about the football program in 2014 because that's what we have the cocktail parties for. The basketball team is coached by Mark Turgeon who is also in his fourth year of coaching at UMD. Under previous head coach Gary Williams the Terps won the national title in 2002. With Turgeon they've failed to make the NCAA Tournament...at all. I'll assume Maryland fans aren't too happy about that.

As you can see here, New Brunswick is close to Staten Island, which is where the Wu-Tang Clan is from. As we're all aware, Wu-Tang is for the children.

With all due respect to Rutgers...they have zero athletic tradition. I think this says it all:

C'mon Rutgers. Even Purdue has 3! Regardless, the Rutgers football team is coached by Kyle Flood, who was previously the offensive line coach for Greg Schiano. Not so smart now are you Greg? The men's basketball team is coached by Eddie Jordan. Yes, that Eddie Jordan. Things didn't go so well for Eddie in his first year as the Knights went 12-21 but I don't think he walked into the best of situations. Good job, Mike Rice.

Rutgers also has an AD by the name of Julie Hermann who is a real piece of work. Remember her name cause we're probably going to hear it a lot.

The addition of Maryland and Rutgers means division re-alignment. More importantly: IT MEANS NO MORE LEGENDS OR LEADERS. We're all happy about that, aren't we? I thought so. While the old divisions weren't strictly based on geography the Legends were to the West and the Leaders gravitated towards the East. Kinda. Maryland and Rutgers will be placed in the East Division, pushing Illinois and Purdue to the West. Michigan and Michigan State will also make the jump to the East.

The new divisions will lead to an expanded conference slate for football in 2016 but we'll discuss that another time (closer to 2016, perhaps).

Here's a look at the 2014 Big Ten Conference schedule (PDF).

I'll save the talk for the College Football Playoff for the dreaded bowl projections piece and instead focus on what's new in 2014. Here's a table of the new bowl lineup:

* - In the three years that the Rose Bowl doesn't host the College Football Playoff semifinals (out of 12) the Big Ten will share a spot in the Orange Bowl with the SEC and Notre Dame (Notre Dame can only appear twice LOL).

** - The Big Ten and ACC will switch between the Music City and Gator Bowl on alternate years.

**** - The Big Ten and Big 12 will rotate these bowls in alternating years.

The great news is that the Big Ten has the possibility of playing in three California bowl games. I personally love the Holiday Bowl and am excited the Big Ten is back in San Diego. The Fight Hunger Bowl has a silly name (although I'm all for fighting hunger) but hey, San Francisco. The bad news is...well...the Pinstripe Bowl. Yeah, I get it. New York. Yankee Stadium. Cool. It's also New York in December a couple days before New Years Eve. Between the weather, the people and the expenses that's not a bowl I see Midwesterners flocking to (I'm sure Penn State fans will make the trip though because they're gluttons for punishment).

There's also something about "tiers." Instead of the old system of sending the #2 Big Ten team to the #2 bowl (Capital One) the Big Ten has adopted a "tier system" for bowl selection. Per Jim Delany in this ESPN B1G blog article:

We're working with the bowls to create what I would describe as a process for selection and approval by each bowl, subject to a series of parameters...We're going to really want to have different teams in different bowls. I think early on in the cycle, you'll see something that resembles a selection process, but as the bowls unfold, you'll see a real focus on getting diversity and freshness.

Per that same article the tiers should look something like this:

While the details aren't exactly clear I assume it will look something like this:

At least, that's how I see it. The issue with this "tier" system is that I doubt it will change anything for the top tier games; the "best" Big Ten teams will still face the best SEC opponents. Because honestly, take last year as an example. If the Capital One Bowl didn't take Wisconsin who else would they take to play 10-2 South Carolina? Iowa? Nebraska? Minnesota?! I don't think much will change for the top tiers as the bowl selection committees will still want the games to be competitive.

On the other hand, I think the middle/lower tier bowls will be a lot more interesting. Considering many of the middle of the pack teams are usually 4-4 in conference, the committees can take multiple factors into consideration when picking a matchup. We'll see how it "formally" plays out as the years goes on.

So there you have it. There's a lot going on in 2014. There's 40 some bowl games, the playoffs and the new guys on the East Coast. I didn't cover everything but I think it's a good start for what's coming this fall. Personally, I'm excited as can be. We get new venues and finally get the playoffs that everyone has been clamoring for year after year. So, what are you excited for this fall?