The Spring Fling 2014 Wrapup: Looking at our Best of the B1G Picks

Share All sharing options for: The Spring Fling 2014 Wrapup: Looking at our Best of the B1G Picks

With the naming of our Head Coaches earlier this week, I'd like to put a nice ending on our Spring Fling 2014. Whereas last year, I only promised that we would take a look back and finish these pieces sometime before the season started, this year we have an actual start and end. I mean, how great is that? More importantly , we were able to incorporate the new guys, represent each team more or less, and get an idea of who to start keeping an eye on.

Some stray thoughts before we get started:

With that in mind, let's take a look at the lists and see what teams were represented, who was voted highest, and all that good stuff.

OL - Other* (Okay, it would've been Brandon Scherff, so I'll let you have this one, Iowa)

Let's do another graph really quick like, shall we?

So yeah, apparently the Maryland voting bloc is up and running. I, for one, welcome our Turtle overlords (so long as they bring crab cakes). Otherwise, there really isn't much to see here. I don't know if any of these guys will finish with awards next season sans Miller and Gordon, but it's not like they're bad preseason picks either.

And the real winner is... 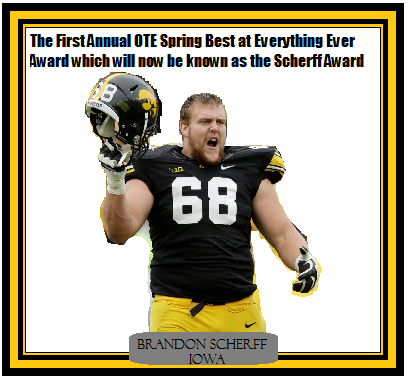