I'm going to assume that you are here for two reasons: you either were here yesterday and read at least a part of Illinois Potluck, Part One, or you just clicked on it from the picture of the pizza. Either way, welcome, but if you don't know what's going on in this post, make sure you go back to Part One. 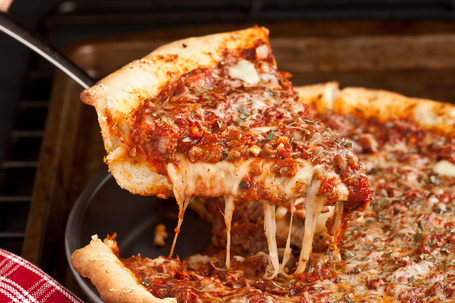 Deep Dish Pizza -- There is no pizza like a deep dish. You can argue New York, Chicago, or whatever style you want (represent St. Louis style, cardboard thin with provel cheese), but when your pizza shares similar features to a casserole, you know you're eating something more than just a pizza. A pizza can be anything, which adds to the greatness of it, but having it contain excessive amounts of all the important food groups is a main course made in heaven. Trying to decide what to get on (or in) your pizza can be a major decision, just like the one Tim Beckman must make.

The quarterback situation at Illinois is currently up in the air, but there is a chance that a dual QB system could come into play. Do you think that two quarterbacks can work together, or does Beckman make to make the distinction before the season begins?
Mike Jones: I'm not a fan of a dual QB system. Each QB and has their own personality and style of play. I think it's difficult for coaches and teammates to adjust to each one. Hopefully, he'll make up his mind beforehand.
Green Akers: Nah, it doesn't have to be settled before games start. Those first two games should be easy wins (if they aren't, picking a QB is probably the least of your worries), so if it's too close to call at practice and you want some live action to help with the decision, play both or all three of them. There will need to be a decision eventually, though, even if it's just settling on a dual system. If you can make the choice earlier, great, but getting it right is the most important thing.
C4B: You can make a dual quarterback system work, but you still hope than one guy will emerge as "the guy", because giving the QBs an equal spread of playing time doesn't really work out. Indiana is still running with a 2 QB system right now, but if last year is anything to go by, Nate Sudfeld is nominally the main starter. If you're lucky, Beckman will have it sorted out by the regular season, and will have a clearly defined #1 starter.
Aaron Yorke: I've never been a believer in the "if you have two quarterbacks, you really have none" philosophy. Most teams who use two quarterbacks don't have one good quarterbacks, so they don't play well. If you have two good quarterbacks, the system will work, but most teams that have that luxury will just use the guy that inevitably proves to be slightly better. Usually a two quarterback system is just an audition process to eventually choose one guy. Unless there is a mobile/pocket system like at Northwestern recently with Kain Colter and Trevor Siemian, I expect the Illini to eventually go with one guy.
Graham Filler: One comment: O'Toole's mechanics...Will stop him from ever being that gunslinger needed.
Jesse Collins: He doesn't necessarily have to make the decision by Week 1, but let's not pretend that stringing this along is super great either. While I'm sure you could talk yourself into Illinois looking more like Indiana's approach last year - partly made possible by injuries and the such - you'd probably more easily be compared to the mess that was/is Purdue's QB situation the past three years. You don't want that.

Ray Ransom: Rutgers has a rich tradition of using two quarterbacks to ensure that neither is successful. From Savage-Lovelace to Savage-Dodd to Dodd-Nova to Nova-Dodd-Bimonte-Dodd, we've proven without a doubt that two arms can throw twice as many interceptions as one. Pray for a single starter. Pray my Illini brothers! Pray! 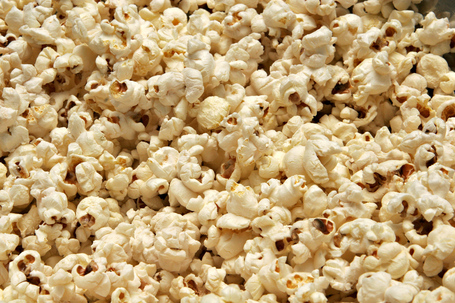 That's right, Popcorn -- The State Snack of Illinois is the dried, exploded form of one of the state's top resources. It so simple, yet so good, making it one of the best edible items while watching movies or exciting football games like Illinois-Purdue. Popcorn is a nice food to have but it doesn't really suffice as an actual meal, just like the new Illini jerseys don't actually count as wins.
The new look of the Illini features an updated yet traditional folks . First off, what do you think of the new look? Second, name the best and worst looking teams in the B1G.
Mike Jones: Looks neat. Now win football games. I'm a fan of the classics in Nebraska, Michigan, MSU, Iowa, Penn State and Wisconsin. The worst has to be Northwestern and Maryland. I'm sorry, you can't make purple work and Maryland's flag makes my eyes bleed.
Green Akers: It's fine, I suppose. I'm not sure about the wisdom of tying what should be a lasting brand to a pop culture fad with the Captain America shield echo, but it might be strong enough to last if the results on the field improve. I don't typically get too worked up over uniforms unless Nike tries to convince everyone that bronze is one of MSU's colors, and even then, I always hear that the players and recruits love different unis, so I guess I can deal with it. This, too, is a part of college football now, but I have a lot of respect for teams that don't feel the need to reach for gimmicks.
That's why I've loved Penn State's uniform for a long, long time. It's a timeless, classic look, like USC or Alabama, and as far as I know PSU's avoided being swept up in the alternates craze that has led to some eye-bleachy results. Having said that, I just don't care for Maryland's brain-punching nonsense. The turtleshell helmets are cool, but the jerseys are a bit much. And maybe that's the whole point, as they did get people talking about an otherwise irrelevant football program. It just feels like a little kid who won't stop tugging at your leg, and when you turn at him and shout 'WHAT?!', he doesn't have anything to say.
C4B: First off, I think 2/3rds of your new helmets come dangerously close to looking like Indiana helmets in those pictures, which probably isn't want you (or we) want. The uniforms do look pretty sharp, so that may be a nice thing. (You should probably guard them jealously, just in case.)
As far as the best and worst dressed in the B1G, the best is probably Michigan State when wearing their regular green jerseys (not the green and gold monstrosities that remind me of the school from South Bend). Don't get me wrong, I like the Indiana uniforms too, but the Spartan green just looks right being on a football field. For worst dressed, probably a tie between Northwestern's Wounded Warrior uniforms (noble sentiment, terrible fashion) and Maryland's state flag uniforms (state pride good, that design bad).
Aaron Yorke: The new unis look sharp. The block "I" looks nice, but I will always be partial to the "Illinois" underlined script. It just reminds me so much of my beloved Giants and the look they sported in the 1980s and 90s. Also, when you have a bright color like orange, you don't need a white uniform, let alone a white helmet. You can pretty much wear those orange jerseys against any team that doesn't wear orange or red. And that's what you have the blue jerseys for. So ditch the boring white.

Speaking of boring white, Penn State needs just a little more pizazz to their look to vault into the top tier of great B1G uniforms. As of now, they are behind Michigan, Ohio State, and Michigan State (except when MSU wears their ugly, pointless bronze-infused jerseys). So who is the worst? One of the red teams... I like Rutgers' sliver helmets, so I'll say Maryland because of the inconsistency.

Graham Filler: I love the Illini makeover. Love it. Apparently there was a study done years ago that said blue/orange is the best sports color combo. I think the new design is solid and not over complicated. Kudos.

BEST - Traditional Michigan jerseys are always going to be high on these lists. Just a good look with the winged helmets.

Jesse Collins: Can I be indifferent? Do whatever you want so long as your players, students, and fans like it. If they embrace it, then whatever. As for best/worst? Bias is bias, but the classic look is always tops for me, so schools like Nebraska, Michigan, Iowa, Wisconsin, etc., win out for me. I'm boring. Worst? I'm with Graham. Rutgers' uniforms are atrocious. I don't mind Maryland's blackout/whiteout look either. But yeah, let's go back to Rutgers is the worst.

Ray Ransom: Coming from the Big East, we certainly have fond memories of beating the crap out of players wearing Syracuse jerseys. Our fanbase and players are extremely excited to notch up a few hard-earned Big Ten wins against these beautiful orange punching bags. Will there be a man wearing a giant orange bean bag chair bedecked with googly eyes?

Best looking uniforms have to go to the Scarlet Knights. Beautiful design, thoughtful integration of the Knight mythos and a modern sensibility to match a new conference for the team. Love those throwbacks even more though!

Worst looking uniforms have to go the team from pennsylvania. I mean, they're gorgeous, classic designs, reminiscent of the Rutgers 2000-2010 era jerseys. Clean lines and a classic look. However, the clothes don't make the man. Put a tux on a piece of shit and its just a piece of shit in a tux.

More Orange: (Even though I'm the writer, I feel I get to give my opinion on any subject I want.) The new Illini jerseys have been in the works for years, and as an Illini fan, I was afraid I would overhype them in my mind before the actual reveal. To my relief though, Nike did a fantastic job with the whole thing. My favorite feature would be the vertical stripes on the jerseys which simultaneously represent the columns on the outside of Memorial Stadium and the jerseys worn during the Red Grange years.

Best looking jersey in the B1G may belong to the Illini, but I want a look at them on the field before I make that decision, so for now I'm going with my second favorite Ohio State. They're classic and iconic, identifiable from any other jersey-helmet combo in the NCAA.

It's really hard to pick a worst B1G jersey. The B1G has many designs that just look like the perfect college football look, both traditional (Michigan, Iowa) and modern (Northwestern, Rutgers). I'm not even that opposed to Maryland's "Pride" jerseys. They're unique, and I mean that in the best way possible. If I have to pick one flaw, it's gonna be the twinsies, Wisconsin and Nebraska. Other than the side of the helmet and a few patches here or there, they look the exact same. Actually, I take it back; the one look will add to the story as these two fight for B1G West supremacy.