Share All sharing options for: B1G 2014 // Hate through the Pity

When I began my schooling at Northwestern in the fall of 2009, I could barely tell you where the University of Illinois at Urbana-Champaign was, let alone muster the energy to care about them. I was told we played them for a top hat trophy, to replace our old culturally insensitive trophy. Again, I could barely muster the energy to really think that it was anything more than a game; I replaced the Governor's Victory Bell in my mind with the Land of Lincoln Trophy. We won that game in Urbana...or is it Champaign? Maybe it was Springfield. Or perhaps Rantoul. I was told that's a city. The school, its orange and blue, and its traditions meant little, if nothing to me.

Then I got to know that sad little ward of the state that is the University of Illinois.

Now, as an aside, I am full well aware of the glass house in which I, as a Northwestern alumnus, reside. To mock attendance should be above me; no doubt some poor Iowa fan who needs to forget his sad existence will post a picture of a sad chair, or empty stands. In all likelihood, that picture was taken after Dan Persa heroically sacrificed his body and anyone wearing black and gold trudged back to their car, realizing that game likely was the only thing to prevent them drinking themselves to sleep that night. No doubt a Nebraska fan will post a .gif of the Hail Mary, realizing that the scorn they heaped upon my alma mater upon entering the conference quickly came home to roost as we were not, in fact, their new Kansas State. They might even throw in a silent count joke, likely as they count silently to themselves whilst considering throwing themselves off their state's highest point into the pile of Big Red (XXL, I'm sure) basketball jerseys they already abandoned after their skullfucking at the hands of Baylor. No doubt, as well, basketball jokes will be made. We deserve those. (Hi again, Iowa!)

Instead, Illinois, we look to you, someone colossally more pathetic in recent memory. You of the card stunts gone...well...just sad. You of the multiple coaches perpetually being paid by the state. You of the tobacco-dipping, sideline-tripping, PSU-recruit-nipping buffoon of a football coach.

Doesn't it get old at some point?

Look at yourselves. Remember, Illini faithful, when everyone's laughing, and you don't know why they're laughing, they're probably laughing at you. Or Purdue. But this week it's you.

Upon Northwestern's sloganizing of "Chicago's Big Ten Team," you then felt so insecure when put up against a private school which graduates 2000 students a year and makes no claim to your pathetic, broken-as-shit state that you felt the need to adopt rip off the slogan, producing "Our State, Our Team. Sirs and Madams of the sad, sad south of the state: you can have it. I was taught when I got to Northwestern that south of I-80 is downstate; south of I-70 is the Confederacy. Upon meeting you, I realize that some stereotypes exist for a reason. In fact, I bet you could be just as successful in the Sun Belt as you are in the Big Ten!

Aside from the awesome troll job that was playing "Sweet Home Chicago" (which Northwestern's PA system and now band ends every game with, win or lose) upon defeating my Wildcats in 2011, you can't even do a rivalry right. You scheduled a statewide tour, stopping at bars and restaurants with the whole happy gang of Beckman & Co. in tow, scheduled one in Evanston, and didn't have the cojones to go through with it when realizing that Northwestern students were prepared to troll the shit out of you. You put up sophomoric signs in your locker room reminding us not to say "Northwestern" and purge your wardrobe of purple attire. You have a coach who refers to signing " four football players out of the ‘state' of Chicago, as we call it." Seriously. So that's failed trolling, juvenile rivalry, and Dan Quayle-esque geography. This is who you are, Illinois. 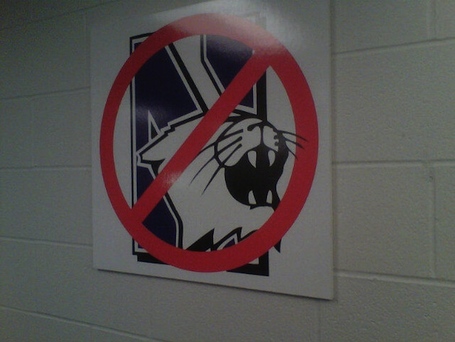 At some point, I want to feel bad for you. A couple years ago I went down to Green Street, partied my ass off, and had a nice time, with no expectations for the basketball game the following afternoon. Then I watched John Shurna make you look foolish. I chuckle, recalling that getting rid of Ron Zook and Bruce Weber would propel Illinois into a new era of athletic excellence.

(As an aside: Get off the court, Bruce, wherever the fuck you are. Get. Off. The. Court.)

I sigh as you cling so hard to your old, sad traditions of pretending that clapping your hands rhythmically above your head as the band plays "Native American" music makes you somehow "in tune" with the tradition of the culture it supposedly imitates. 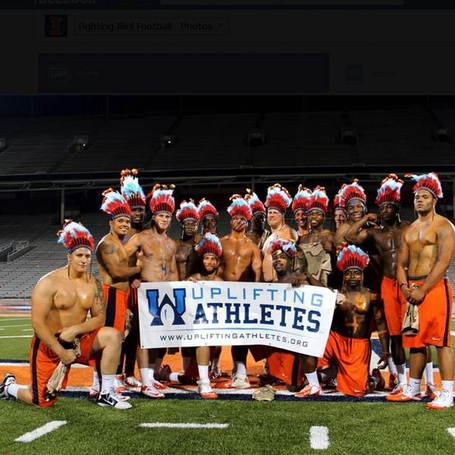 Now, where was I? Oh. Yes. Since getting rid of Messers Zook and Weber, their clownish stature and mannerisms so indicative of the state writ large aside, Illinois has clearly laid claim to "Their State." So clearly, in fact, that the Fighting Illini, Rantoul's Big Ten Team, have managed an 0-2 record in football and 1-2 record in basketball against Northwestern since those coaches took the helm. Going back a decade, basketball turns in the Orange and Blue's favor, 13-6 (though not going .500 til '08-'09), while football remains a joke, at 7-3. Just for the record, cherry-picking recency for football requires you to go back to 1982 to even out the series: it's been 16-16 since then, and despite a half-century of Northwestern being Northwestern, somehow the Illini only hold a 6-game lead overall. Dominating! Kind of. Or something.

I would cite recruiting statistics here, just to remind the Fighting Illini of how Pat Fitzgerald continues to kick their asses up and down the state in recruiting, lest HAT HAT HAT wasn't enough. But telling the Illinois faithful that recruits offered by both programs in 2014 and 2015 chose Northwestern, 3-0 (more laughable figures here), would just be piling on. But hey, it'll get better, right? Soon you'll get to pay Tim Beckman's severance, too. Positives! The Motor City Little Caesar's Detroit Bowl will be happy to accommodate the Fighting Illini in 2017, and I'm sure you'll be happy to go, as the Kraft Fight Hunger Bowl will be but a fleeting memory by then. Don't worry, we'll take our smaller fanbase, the attendance jokes, and the history lessons in stride. At least we can take some pride in our university's athletic program.

Illinois: Perpetually missing the point, their pride, and the postseason. At least they'll always beat us in basketball.