Join the tailgate party, brought to you by some of the best food in Bloomington!

Share All sharing options for: B1G 2014 // Indiana Potluck Part One 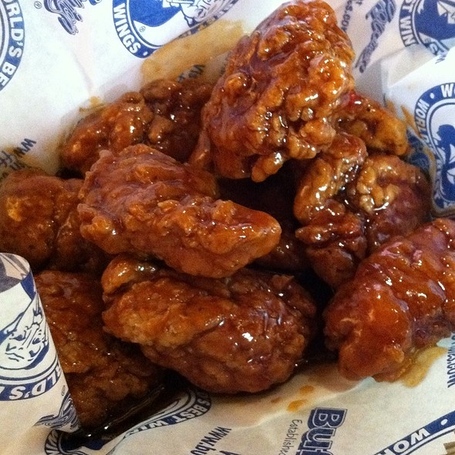 Voted the best wings in Bloomington by the readers of the Indiana Daily Student, BuffaLouie's wings cater to a variety of tastes. Like the wings, Indiana runs multiples varieties of quarterback, with the dominant choices being Nate Sudfeld throwing passes all over the field, and Tre Roberson running and occasionally gunning. Can Indiana have enough success with a two quarterback system to make some noise in the new B1G East?

Green Akers: They already have, but then, the offense hasn't exactly been the problem under Wilson, has it? It seems like a dangerous game- it's hard to believe two guys as talented as Sudfeld and Roberson are really OK with sharing snaps and not knowing when they'll play or not- but if nothing else, Indiana can be absolutely sure that, should an injury or suspension claim their "starter," the backup won't go deer-in-the-headlights on you. Personally, I'm inclined towards Roberson this year, as the receiving corps will be less experienced and a run threat at QB could keep some attention off of the new receivers.

Graham Filler: The new East Division: Indiana, Maryland, Michigan, Michigan State, Ohio State, Penn State and Rutgers. Pretty sure that MSU and OSU come in as favorites. But if you want to use the term "make noise" broadly, then absolutely, the Hoosiers could make a lot of noise. We trust Kevin Wilson to utilize a two quarterback system effectively and knock off a Penn State (again) or Rutgers.

Jesse Collins: I'm still of the mindset that you pick a QB and stick with him until he proves your choice wrong. I think we've discussed it before, but you need to get some chemistry with your line, receivers, and even backs. When you don't do that, you're just asking for trouble across the board. That being said, I agree with the idea that GA points out in that this is a team that can be successful with either. Will they make noise in the new B1G East? Unfortunately, that's not going to be a super fun thing to do this year, and it won't be on the QBs to do that. [Paging a nominal defense to the front of the room. Paging, a nominal defense.]

Brian Gillis: Indiana has more to worry about than its quarterback situation. Kevin Wilson's Hoosiers will score points, but will they stop anybody? Last season the Hoosiers gave up more than 40 points in seven of their 12 games, not surprisingly losing all seven. It won't be who's under center that will define Indiana's season, but rather whether the defense gives the offense a chance to win. 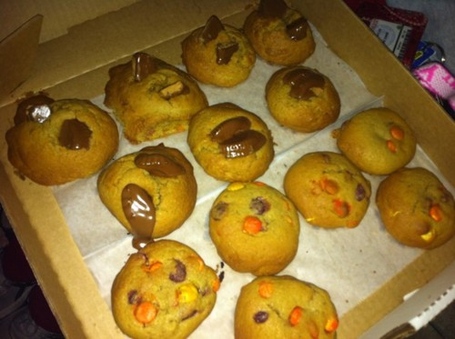 For those with a sweet tooth, this is a must-eat when visiting Bloomington. You choose what kind of dough, what you want mixed in, if you want some kind of topping, and they bake it up. Being able to plug in whatever ingredients you want makes these some of the best cookies you will ever have. New defensive coordinator Brian Knorr will have the unenviable task of putting together something better for an Indiana squad that has often been basically terrible at it. What do you think is the missing ingredient for Indiana to have a successful defense, and will Knorr be able to find and use it?

Green Akers: Aww yeeeeaaahhhhh, Baked. Good stuff. When I was there 2 years ago, I made a drawing of Sparty spearing Cody Zeller on my box, but I'm not sure it merited inclusion on the walls due to both quality and subject matter.

Anyway. IU's defense. The one thing I consistently notice on IU's defense is the inability to finish a play, even on the occasions guys are in position to make them. Missed tackles, bad angles, the sorts of things that good defensive coaching should remedy. There are still games (every matchup with Wisconsin ever) where IU's defense is just physically overpowered, but those are less common now; it feels like primarily mental mistakes at this point. The good news there is IU now has plenty of experience, having played a horde of underclassmen the last two years. If the defense doesn't noticeably improve this year, I don't know what to tell you.

Graham Filler: The missing ingredient is talent, always talent. HOWEVER - sometimes D-Co's can overcome lack of talent with an effective scheme and veteran leadership. Indiana is a couple years away from that though. This has legitimately been the Big Ten's worst defensive team.

Jesse Collins: I don't even know what's going on in that picture, but I just had a sudden spike of insulin and feel a little jolt of energy. Anyhow, I think Indiana is still a little low on scheme. I watched a few games and it reminded me of Nebraska under Callahan. Great offense, strong tendencies towards competency in theory on defense, and a woefully outmatched defense because if you don't have supreme athletes for schemes that seem to focus on pressure and such, you just fail miserably and give up a million points to Texas Tech... But, you have a newish DC, right? The missing ingredient is hiding deficiencies, bend don't break, and really honing in on TOs.

Brian Gillis: Missing ingredients would be more like it. If there is a key ingredient, it's time. While there's hope for Indiana's defense to improve, as Knorr has had success in the past, don't expect significant change overnight, particularly considering that the Hoosiers are likely to be running a new defensive system. Holding opponents to less than the equivalent seven touchdowns a game more often than not, though, would seem to be a reasonable goal.

Wednesday: Potluck Part One (you are here)