The tailgate never stops in Bloomington. Seriously, it might be going on right now.

We continue the Indiana potluck with the two main staples of any good college diet: pizza and beer. Bloomington has large quantities of high quality products for both, with two of the best seen here. 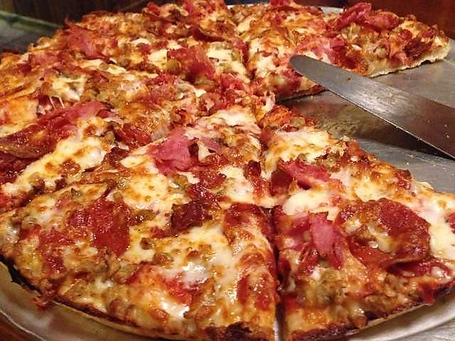 Mother Bear's is routinely cited in any discussion of "the best pizza in Bloomington" and is actually world-renowned (or so they claim) for their pizza. While the pizza is quite good when carried out or delivered, something is missed by not dining it at Mother Bear's, as the place has very beneficial ambience. A two part question: first, what is the best place to get pizza in the Big Ten, and second, is there any place in the B1G where dining in should be mandatory when visiting the associated school?

Green Akers: I'd find it hard to believe that conference's the best pizza isn't somewhere in Chicagoland, though maybe that's not the case anymore thanks to #footprint. As for the MSU environs, the answer lies in Lansing itself. My personal preference is DeLuca's, a family restaurant on the West Side that started as a lunch counter for factory workers in like the 1930s or thereabouts. Another decent spot, and the definite winner for atmosphere, is Emil's, which was supposedly a hangout of Al Capone's when puddle-jumping between Chicago and Detroit in his personal aircraft. Who knows if that's true, but the food's legit.

Graham Filler: A couple thoughts here. First of all, East Lansing pizza is less than fantastic and/or accessible for visiting fans. Your best bet is if someone's tailgate ordered Pizza House. Second, I'm assuming that HopCat in East Lansing will be overrun amazingly every football season from now to kingdom come, as it should be. Fantastic meal/drink combination there.

Jesse Collins: Chicago has delicious pizza, so let's just go ahead and say one of their many deep dish establishments are more than okay. Although, as a short aside, Yia-Yia's Pizza in Lincoln has this oven-baked pizza that's pretty damn good, and if you find yourself there, grab a slice of Pacific. It's Canadian bacon, pineapple, and cream cheese, and it's so good.

As for Lincoln dining establishments, I highly recommend going to Lazlo's in Lincoln. Home of the great Empyrean brews - try the Vanilla Porter - and a place you can get a tasty prime rib, it's really worth checking out. Honestly, other than Misty's and some newer establishments I haven't tried, I'm not super well acquainted with Lincoln. If it were me, I'd take the short trip up to Omaha and grab food at any of a myriad of restaurants we have up here.

Brian Gillis: I've always been a fan of deep dish pizza, and living on the west coast where deep dish is hard to come by, I make an effort to have some every time I'm back in the Midwest. I'll take any of the big three in Chicago - Gino's East, Giordano's or Lou Malnati's - and be happy. Mandatory dining in Ann Arbor? The popular choice would Zingerman's Deli, which gets plenty of attention, including on-air spots nearly every time ABC or ESPN comes to town. However, for something a little off the beaten path, I'd opt for my favorite Ann Arbor haunt, Blimpy Burger. Forced to move from its campus home of more than 60 years, Blimpy Burger thankfully found a new home in the downtown stretch of Ashley Street. It's worth the visit.

babaoreally: Bruno's in West Lafayette has some pretty good pizza. I'm sure it isn't the best in the B1G, but they cut it weirdly if that counts for anything. Their saving grace is Bruno's dough. Bruno's dough is basically a balled up version of breadsticks. It doesn't really sound that great, but it is.

Upland is a very popular local brewery that opened in 1998 in Bloomington. Their beers can be found on tap all over the Midwest, and especially at their West 11th Street Brew Pub. And as we all know, no tailgate is complete without a few beers among friends. Given that tailgating is an almost mandatory part of the college experience, what's your best tailgating story? (Names can be changed to protect the extremely guilty.)

Green Akers: That'd be my senior year, when a group of friends and I camped for the Notre Dame game. Nothing quite like playing football in the stadium parking lot at 3 am. As we knew we'd be in the front row, we painted (as I recall, I cut a dashing figure as the 'E' in GO STATE), but as we later discovered, we had purchased not body paint, but the acrylic stuff you'd normally use to paint furniture.

One of our party- let's call him 'Justin'- decided it'd be a good idea to slam most of a fifth of whiskey (I think? Eh, who remembers) between the hours of 7 and 8 am. From that glorious decision, his day proceeded thusly: make drunj conversation with the cops watching the line, lean heavily on the rail in the front row, puke behind said row for most of the first half, emerge from his blackout at halftime, become severely dehydrated from the one-two punch of binge drinking and standing in the sun in an acrylic bodysuit for 4 fours.

You'll notice no mention of my own drinking in that story. That's because there wasn't any. I didn't drink much while actually in college because as a child, my dad successfully instilled in me an abiding fear of jail. I think I've made up for lost time, though. And at the time, I was more concerned with my 15 seconds of fame on ESPN as they got their crowd shots at the end of a victory over The Decided Schematic Advantage and Golden Boy (still waiting on those four national titles, Jimmy).

Jesse Collins: Hi, my name is Jesse and I don't have really cool tailgating stories. I blame this partly on going to multiple schools and not staying on a campus. If I think of one, I'll let you all know.

babaoreally: This is took place well after my college years in 2009. I woke up and had to drive a couple of hours to the Bucket game in Bloomington. I didn't have much time to get ready, and had just woken up. I knew that my black Purdue shirt was in my duffle bag, so I reached in, grabbed a black shirt and put it on. I put my zip-up hoodie on over it and headed out to the game.

I got to the tailgate, and it started warming up. I took off my hoodie and someone asked, "Why are you wearing that shirt? Are you scared to wear a Purdue shirt?" I looked down and I noticed that I was wearing a black Southeast Missouri State shirt, which was also in the duffle bag, apparently. The shirt had a big red logo on it, so it looked sort of like an Indiana shirt. I was also asked, "Don't you look at yourself in the mirror after you get ready in the morning?" I answered truthfully with a "No".

The story has a happy ending though. I was wearing a Purdue hat, so I got heckled by some drunk IU students (they actually went to the game!). And Purdue won of course.

Graham and Brian declined to provide a story. Now, I'm not saying you should hound them for one, but I'm not not saying it either.

C4B: I have no good tailgating stories, because I usually woke up just in time to make the (many) noon kickoffs IU football had, and went straight to the game. Yes, I know, I'm weird.