Hate is great when it is Hoosier hate.

Share All sharing options for: B1G 2014 // Keeping the Enemy Close: Indiana Football is Better Than Arson!

It's time for some IU hate. This is my third year of writing this, and I am kind of running out of things to say. So instead of saying it with a bunch of words, I'm going to try and quantify it with a statistic and a troubling fact.

If you want to read a bunch of words, check out my two previous hate pieces. They both still apply. I wrote this two years ago, where I explained that I am obligated to hate the Hoosiers, but that obligation doesn't make it any less satisfying. Last year, I wrote this piece where I explained that having the team with the most losses in FBS football history as your main rival is a great thing.

Let's get to it then. I know what you're thinking, generic B1G football fan. Why should I hate IU? They're harmless, with their stupid candy cane helmets and pants, right? WRONG.

Taking a cue from baseball's VORP (value over replacement player), I decided to create a stat called VOIUF (value over Indiana University football). I have spent many hours in the lab testing my formula and have scientifically proven that it is a correct formula. If you argue that is formula is flawed, you are arguing against science.

Take a look at that: Notre Dame has a 0 VOIUF. That means that the VOIUF formula is accurate; Indiana and Notre Dame are equally awful. So if you hate Notre Dame, you should also hate IU.

Other than that, VOIUF is pretty worthless as a team comparator. Almost every other team in college football has the maximum possible value of +1000. Then it hit me; I can generate VOIUF numbers for anything! There's no reason why it had to be football teams; I can put anything I want in the formula and get a value for it. I tried to come up with a bunch of bad things so that I could properly judge the value of Indiana football. Check out the results below (range is still -1000 to +1000).

If a picture is worth a thousand words, I'd say the above graph is worth about 600 words. Indiana marketing department, feel free to use "Indiana Football: Better than arson!" if you want a cool and factual slogan.

VOIUF proves that IU football is worthy of hate. Look at that graph again: Indiana football is equal to Limp Bizkit's cover of The Who's "Behind Blue Eyes". If you don't hate that song, you probably have't heard it. Fred Durst uses a Speak & Spell during the song, and it doesn't even have the second part of the song (the rocking part). It's the worst cover of a great song that I have ever heard. If you have heard it and don't hate it, you deserve Indiana football. If you do hate the song, then you should hate IU football as well. VOIUF proves that they are the same thing.

While doing some research while creating VOIUF, I came across a statistic that made me hate IU even more than before. I have always hated the Indiana University sports teams, but not the college itself. That changed when I saw this fact.

Indiana means "Land of the Indians", so you would think that the school would have a lot of Native American students. That simply is not the case. Check out this graph based on 2012 enrollment from the National Center for Education Statistics: 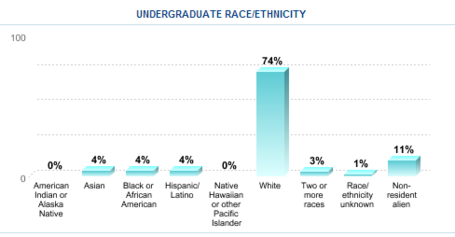 Look at that! 0% American Indians!!! Why wouldn't more American Indians attend "Land of the Indians" University? Is the admissions office automatically denying admission to these people? Or has Indiana University created a campus climate that is hostile to Native Americans, and they don't even bother to apply? Most universities give incentives for Native Americans to attend, it looks like IU does the opposite. I'm not one to believe in conspiracies, but I think this one goes all the way to the highest levels of IU administration.

I could go on, but I'm going to stop now. If you need more evidence than the above to hate IU, you are a terrible person. I'm not even talking about liking IU, just indifference to IU is abhorrent. How can a good person be indifferent to discrimination and Limp Bizkit?

Hating Indiana is good for the soul. It is a righteous hatred. Please join me in the hate.