So, now you care about Northwestern football. After all those years treating the program as the B1G's redheaded, left-handed, soulless stepchild, your boss—who just so happens to be a Northwestern grad—asks you what you think about the team this season at your company's cocktail party.

Naturally, you're interested in not looking like a bad sports fan in front of your boss, so you excuse yourself to go to the bathroom, where you take a quick glance at this comprehensive, all-encompassing, exhaustive, thorough, extensive preview of the Wildcats 2014-15 season.

For starters, the Northwestern football program is certainly back in the national spotlight, but not for the reason NU fans would have hoped. (If you're confused, here's what you need to know.) The last time the 'Cats were relevant on a national scale was back in October, when a hot start to the season and a narrow loss to Ohio State put Northwestern on the college football map. As 'Cats fans know all too well, however, seven consecutive losses ended that moment of glory rather swiftly.

It’s hard to fathom just how quickly the team’s fate changed after that heartbreaking loss, but now that the nightmare 2013 season is over, it’s time to take a look at where the ‘Cats stand heading into the season.

Nobody died? Not much went right for a 'Cats squad that won a single game in B1G play and missed out on a bowl game.

In all seriousness, the 'Cats did begin the season on a high note, coming a few minutes away from a 5-0 start. A few players also had nice seasons, including good old Jeff Budzien, who connected on 23 of his 25 field goal attempts, and running back Treyvon Green, who led the team in rushing yards and rushing TDs after totaling 73 yards on the ground the season before. Wide receivers Christian Jones, Tony Jones and Rashad Lawrence increased their receiving totals by a combined 693 yards from the previous season, though that may have been more by default due to a lack of other receiving options.

Do I really need to spell it out for you? The 'Cats went on a stretch that took us all back to the Northwestern teams of the late 1970s, finding crazy ways to lose and wasting strong defensive performances, much to the ire of NU fans. There's really no need to delve into this too deeply because we all saw what happened, and it's too depressing of a subject to discuss at a cocktail party anyway.

The most obvious issue is the quarterback dilemma that’s surfaced in the wake of Kain Colter’s departure. Trevor Siemian will begin the season atop the QB depth chart, and while the situation won’t be considered a "dilemma" if the senior quarterback picks up where he left off (414 yards, four touchdowns, no interceptions against Illinois in the season finale), it’s hard to ignore Siemian’s overall struggles last year.

Heading into that final game on Nov. 30, Siemian hadn’t thrown a touchdown pass since Oct. 19, and anyone who watched NU football games knew he looked lost in the pocket at times. There was the key pick-six he threw against Minnesota that essentially cost Northwestern the game, or his 4-of-13 performance against Nebraska that included another deadly pick-six, though the ending of the game wiped that from NU fans’ memories. 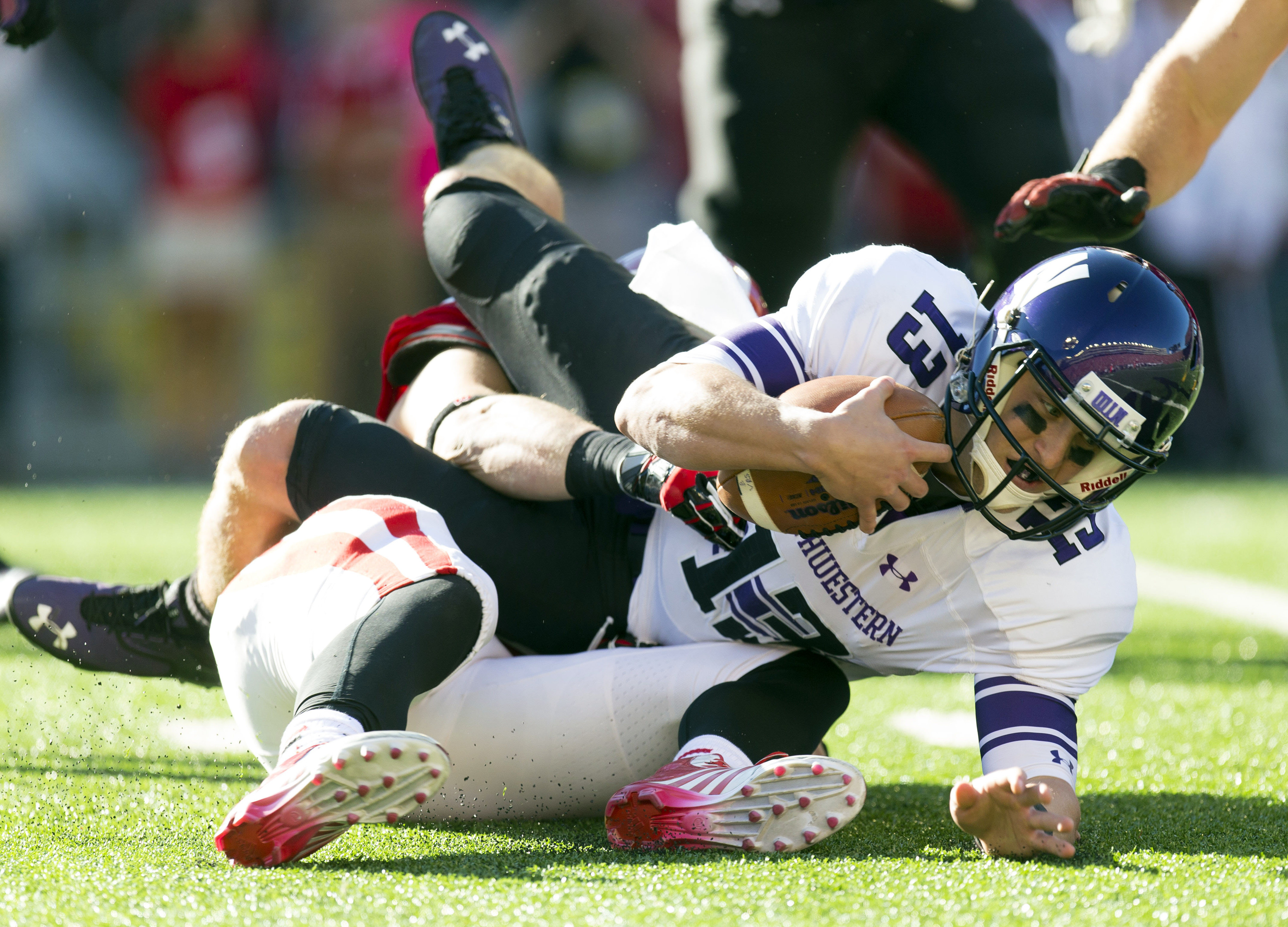 But before you think that I’m hating on Siemian too much, I should note that I truly believe he’ll be much better this year. For one, he should be fully healthy after battling through a recurring bone bruise on his heel for most games in the latter half of the season.

"If you look at healthy Trevor, it's [the Illinois] game, early in the season and then what you saw the previous two years," Pat Fitzgerald told ESPN’s Adam Rittenberg. "When he was not 100 percent, unfair to him, it wasn't as successful as any of us would have wanted."

Siemian will also play more consistently, as Fitzgerald and offensive coordinator Mick McCall want to move away from the two-quarterback system—which can only help Siemian this year. Add in some weapons at the receiver position (Christian Jones, Tony Jones, Kyle Prater, Pierre Youngblood-Ary, Cameron Dickerson), and Siemian could have himself a nice season.

Wow…that was a lot about just one player, but as the only sure starter on the offensive side of Pat Fitzgerald’s squad, as the coach himself stated, it was worth the space.

Now, if you’re still wondering why Northwestern’s win total got cut in half between 2012 and 2013, look no further than the offensive line for explanation. Only Purdue allowed more sacks than the 36 NU surrendered last season, a total that seems even too low given the number of times we saw Siemian and Colter get hurried or flushed out of the pocket before they had a chance to even take a breath.

There’s good reason to believe that will all change in 2014—all five starters from the O-line will return, though you might say that’s not necessarily a good thing given last year’s results (and you might be right). Even appearing in Sports Illustrated didn’t make Brandon Vitabile a better blocker.

Venric Mark is excited for the season...you should be too. (Byron Hetzler-USA TODAY Sports)

But Fitz is pushing his offensive line by not guaranteeing anyone a starting spot. Maybe a little prod in the rear, so to speak, is what the O-line (and the team in general) needs going forward.

We’ll round out the offense by taking a look at the backfield, because how could we not mention Venric Mark?

Even after playing in just three games (and being limited in the ones in which he did appear), Venric still has to be considered one of the B1G’s better backs going into 2014. He’s lightning quick, and he’s one of the best when it comes to mixing it up in between the tackles.

Treyvon Green will join Mark in the backfield after putting up a pleasantly surprising 5.4 YPC in 2013, including eight TDs on the ground. If the O-line can put it together, this could be a pretty formidable rushing duo.

I’ll try to keep this a bit shorter because a) the "Offense" section got a bit carried away and b) the defense has tons of returning players.

While the departures of Tyler Scott, Will Hampton and Damien Proby will leave big holes, defensive leaders Ibraheim Campbell and Chi Chi Ariguzo return after acting as a couple of the lone bright spots on the team last season. Defensive end Dean Lowry, defensive tackles Chance Carter and Sean McEvilly, and essentially the entire secondary (in addition to Campbell) will return, including Nick VanHoose, Dwight White, Traveon Henry and Matthew Harris.

One of the interesting early-season stories could be who will step up to fill the strong side linebacker spot, with Collin Ellis moving over to MIKE to take over Proby's position. There are certainly plenty of question marks when it come's to Northwestern's defense, many of which will be answered—for better or for worse—during the team's first few games.

Punting was an unmitigated disaster last season, there’s no question about that. I’ll never forget Brandon Williams’ eight-yard punt against Michigan—why, you might ask? Well, his kick went out of bounds at the 11-yard line—the Northwestern 11, meaning the Wolverines were one yard shy of likely having the first ever 1st-and-goal following a punt that wasn’t returned or blocked.

Think about that for a second.

But in all seriousness, Jeff Budzien is gone (the Groza snub still stings—lookin’ at you, Palm Beach County Sports Commission), which could be a serious detriment if nobody can step up to take his place.

Hunter Niswander appears to be the most likely candidate to try to fill Budzien’s shoes, while Chris Gradone should handle the punting duties after becoming the de facto starter at the end of the season, when Williams’ struggles became too pronounced to justify allowing him to keep punting.

Meanwhile, Venric Mark is back (don't forget, he's an All-American returner), and Matt Harris stepped it up returning kicks in 2013. There's no doubt that the return game is clearly in better shape than the kicking and punting is.

The takeaway is that NU’s special teams should take a step backward in 2014, though at the same time, after ranking 118th in net punting average, there’s only one way to go but up in that regard.

Breakout Candidate: Matt Harris, KR (Mostly because he lives in my dorm)

The ‘Cats will kick off the season with a matchup against the Cal Bears, though this time the game will take place at Ryan Field. Having attended the game last year in Berkeley, I’ll say that it definitely served as a precursor to the misery that would follow down the road. While the ‘Cats won the game by 14 points, a pair of Collin Ellis interception returns for touchdowns, both off deflected passes, were all that saved Northwestern from an embarrassing opening day upset. 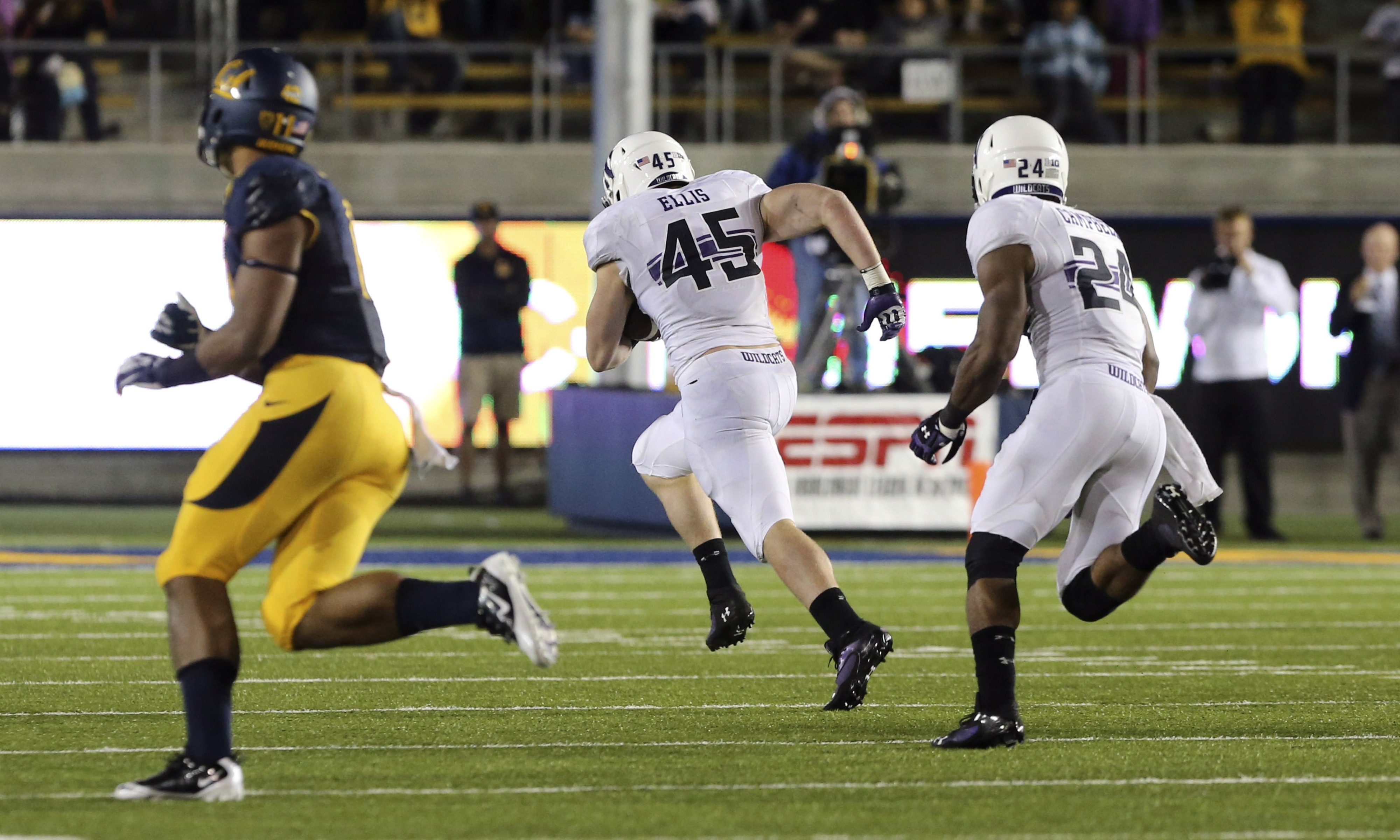 Now, with the advantage of playing at home, the Wildcats have an even better shot of extending Pat Fitzgerald’s unbeaten streak in season openers to nine straight. The Bears have also won just once since their loss to Northwestern, including an ongoing 10-game losing streak.

From there on out, the ‘Cats will face Northern and Western Illinois before kicking off their slate of B1G games. What stands out the most about the ‘Cats schedule this season? They won’t face Ohio State or Michigan State during the regular season—a huge break. Their schedule in B1G play is as follows:

As you can see, the schedule isn't exactly imposing. The eight opponents went 28-36 last year, with several of the wins coming against a struggling Northwestern squad. Maybe getting a break from Brutus and Sparty is just what the 'Cats need.

Take it from a Northwestern student who claims he isn’t biased but really, truly is deep down: The Wildcats are a serious threat to turn things around in 2014. It would be a stretch to say they’ll equal their 2012 success (they won't), when they won 10 games and were darn close to winning all 13. But you’d be fooling yourself if you think NU will roll over again and post another five-win season. Some advice to other B1G football teams: Tread lightly around Northwestern.

If You're Talking to a Northwestern Fan

Somehow, Coach Fitz has managed to put together an outstanding recruiting class, despite the team's off-putting performance last season. According to the good folks over at Scout, Fitz has stockpiled a recruiting class consisting of more recruits than all but eight other teams, including four-star brothers David and Andrew Dowell.