Share All sharing options for: B1G 2014 // Northwestern's Smartest Guy in the Room: FITZ

What do we make of Pat Fitzgerald?

Perhaps the most beloved figure on Northwestern's campus, Fitz lost a bit of face with the team's ongoing struggles last year. The seven-game losing skid led some to even talk about the head coach's job security (gasp!), and while that's an utterly ridiculous sentiment, the eight-year NU coach will certainly want to start off on the right foot this season to avoid that conversation becoming a legitimate one. 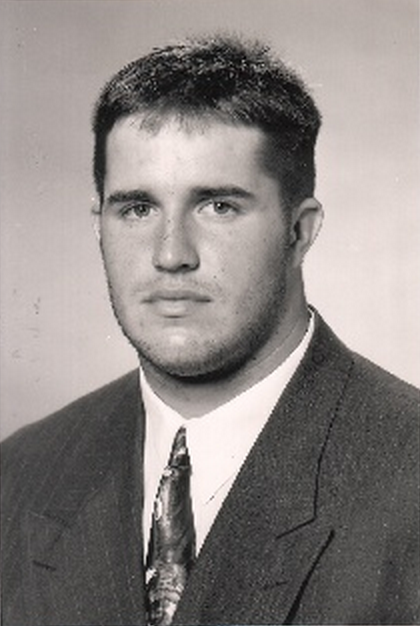 Maybe he knew he would become the winningest coach in NU history back when this was taken...probably not.

Though even thinking about Fitzgerald's job security last season is somewhat of a laughable notion, his tactics and decision making did come into question at times, perhaps rightfully so. There were certainly a few too many punts on fourth-and-short inside opponent territory, which was especially suspect given the team's ongoing losing ways. When it was clear the team needed a change on the field, Fitz stuck to his old ways at times.

And yet, why wouldn't he? As one of the most successful coaches in the program's long history, Fitzgerald's system has historically worked—he nearly pulled off an undefeated season in 2012 (5:03) and he has more wins than any other NU coach, ever. He also helped the team win its first bowl game since the Stone Age that year (read: since 1948), and he's established an overall winning atmosphere around a team that has historically never sustained that kind of success.

So yes, Fitz has a bit of leeway when it comes to his coaching decisions, even if it was a bit frustrating to see his overly conservative nature play out at times.

An offseason of phenomenal recruiting success has also given Fitz some serious cred. It would have been hard to picture the 'Cats as the team with the ninth-most recruits this offseason following their collapse last year, but somehow, Fitz has worked his magic and put together an impressive class that includes a few four-star players (brothers Andrew and David Dowell) and a collection of three-star commits at an assortment of positions.

Fitz has also had to navigate the confusing and exhausting unionization spectacle, which makes his recruiting success all the more impressive. After essentially being attacked by his quarterback of three years, he didn't miss a beat. That's something that shouldn't get overlooked.

Looking ahead to the upcoming season, a relatively light schedule gives Fitz an excellent chance to re-enter the good graces of the university's fanbase (if he ever left), given the absence of formidable foes Ohio State and Michigan State from the regular season's slate of games. He'll also have a good opportunity to start off on the right foot, as the 'Cats will once again face Cal to open up the season, this time at Ryan Field, with a chance to extend Fitzgerald's unbeaten streak in season openers to nine straight games. (The 'Cats haven't lost their first game of the season since a double-overtime thriller against TCU in 2004.)

I'll close out by leaving you with some highlights from Fitz's playing career—he's number 51—just to remind you of what Northwestern football used to be, and where it could be headed in the future.