Naturally, this isn't actually a potluck. Don't be the Michael Scott of the group and bring old potato salad. Step in for a fine feast, courtesy of your friends at Northwestern! Try not to bother the DePaul grads while they work, OK? These catering companies don't come cheap. And will someone teach those Nebraska fans what a goddamn tie is?

Share All sharing options for: B1G 2014 // Grab Your Black Tie, It's Time for a Northwestern Potluck

Fine then, I guess a ratty old sweatshirt it is. If everyone would be so kind as to leave their coats with Katie at the door, she'd be happy to take them. Be sure to ask her about her degree in English literature from Loyola. She's very proud.

Oh, you like the service in the dining room? We appreciate that. It was a gift from the Marquis de Salmonencroute, Distinguished Ambassador from Luxembourg. Apparently the Duke of the Banat of Temesvar was sitting down to dinner at this very service before the Habsburg secret police burst through the doors and arrested him for conspiring with a group of Hungarian radicals. Scandalous, no? But not as scandalous as the goulash the duchess was trying to pass off that night!

Oh, yes, the appetizers! Well, do make yourself at home, perhaps peruse my rare book collections, and try not to get too many fingerprints on anything, OK? Welcome, again, to your 2014 Northwestern Potluck. 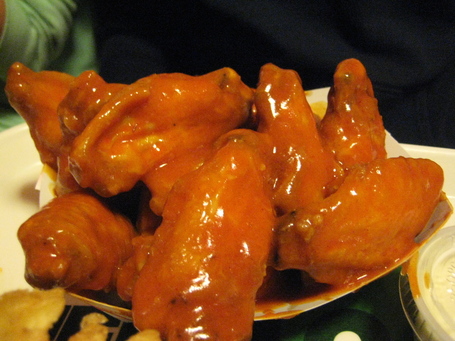 Appetizer: The finest wings in Chicagoland. Just to show we can slum it with our B1G guests, we'll open up with the hot, buttery taste of Buffalo Joe's wings. Always hot, spicy, and crispy, the Buffalo Joe's wings are a must for any party or sporting event watch party. Seriously. A trip to Ryan Field isn't complete without dinner before or after the game at Buff Joe's.

1. Northwestern's offense returns 10 starters in 2014, including Venric Mark, a bevy of talented wideouts including Rutgers transfer Miles Shuler, and a more experienced offensive line starring Brandon Vitabile. So what do you make of Northwestern switching back to the up-tempo, spread, dink-and-dunk 1-QB system? An admission of failure, or a strong support of Trevor Siemian? Will it succeed in 2014?

C4B: If the system fits Siemian's strengths better, then I would guess it's a strong show of support not trying to force a bad system on him. If he fit the old system better, then I don't know what to think. Will it succeed? Well, you are in the less top-heavy division, so there's definitely a chance. I'll say yes but be perfectly happy to be proven wrong because I don't like leading you in all time losses.

Jesse Collins: I think it was stupid to move away from the 1-QB system in the first place, but I'm not the coach. Anyhow, so long as Venric Mark can keep upright and force defenses to honor the run even a little, Northwestern should succeed. Or, at least they should succeed more than they did in 2013. The rushing YPA last year was a shade over 4, and was good for fourth worst in the conference (besting Illinois by like .02 yards) and 80th overall nationally. That will be the deciding factor on how good this offense can be. That being said, I think Siemian in a sustained role can be sufficient. He's smart and when he's not trying to force things in the pass game (albeit last year that was kind of what had to be done at times), I think he manages that dink and dunk well. All that is a long way of saying maybe it works out okay.

babaoreally: While losing the dual-threatedness of Colter might seem like a big loss, it might be for the best. Concentrating on a single QB and a more passing-oriented offense should work out just fine. I guess. I don't really know.

Aaron Yorke: There will be plenty of people that can tell you about the advantage in efficiency held by a passing attack based on completion percentage and yards after the catch. Do those people really matter, though, when you've got a halfback like Mark to fall back on? Siemian has proven to be a capable passer in the past, so I think the aerial portion of the attack will work. The real issue is whether or not Mark can stay healthy and fulfill his massive potential.

Brian Gillis: Did Northwestern ever truly depart from an up-tempo, dink-and-dunk system?  It's served them well in the past and should continue to do so.

Green Akers: I wouldn't view it as a concession of failure so much as Fitz's continued intent to make the best use of his players. For ten years, his best QBs were smart, accurate passers with mediocre arm strength and no mobility, so his offense relied on the short passing game. Colter shows up with his running ability, so we had a fun little detour with the option. If anything, going back to the rhythm method passing game is a return to the team's roots - at least until Matt Alviti takes the reins. 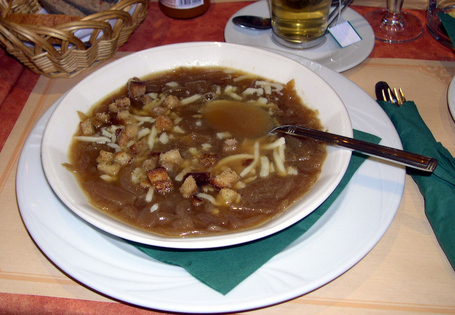 Soup/Salad: French Union Soup. Do you get it? DO YOU GET IT?!?

C4B: I'll say 2013 was a fluke (for now). All the momentum you built pretty much died after that Ohio State game, and only facing a fairly inept Illinois team kept your season from being a complete disappointment. Move that Ohio State clash to later in the season, and maybe you still go bowling. However, if you regress again this year, then it becomes a trend.

Jesse Collins: I'll say it was probably the swinging of extremes. Neither '12 or '13 are isolated as the norm, but rather most all of '07-'11 is. In those timeframes, the Wildcats had between 6-9 wins and 3-5 conference wins. That seems about right to me for a team that has to overachieve due to outside extenuating circumstances (see: academics). So, the peak might have been 2012 with a team that got some great injury luck and played up as a whole, and the valley is probably 2013 when that luck ran out and everything that could go wrong, consistently did. I fully expect Northwestern to settle into a 7-9 win pattern again this season with 3-5 conference wins.

babaoreally: I think the normal Northwestern range at this point is 6-7 wins. I don't see the Cats as a team that will win nine games consistently, but they won't have very many four win seasons either.

Aaron Yorke: As someone who was been banging the "Fitzy to PSU" drum back when we were looking for a successor to JoePa, I can tell you confidently that 2013 was a fluke. Sure, the results on the field for the Cats haven't been mind-blowing lately, but the recruits coming into the system are better than ever. This season NU is bringing in five four-star players, and the rest of the class is mostly three-star guys. Northwestern remains a program on the rise as long as Fitzy keeps getting such awesome talent to show up.

Brian Gillis: Northwestern is at a crossroads.  Everyone is aware of the program's improvement over the past decade or so, but where do the ‘Cats go from here?  Will they remain a second-division team that's a good bet to win six or seven games but not much more than that, or will they take the next step and become legitimate title contenders?  Northwestern had a chance to take that step last year when they hosted Ohio State in what was at the time the game of the year in the Big Ten.  The ‘Cats played well, and were it not for a few plays, might have won.  But you could say the same about most of their losses, that Northwestern was a few plays away from winning.   The real question is, will Northwestern start making those plays and winning big games, and in the process, thrust themselves into the conservation of the league's top teams?

Green Akers: I view 2013 as more of a fluke than an accurate trendsetter. It reminded me very strongly of MSU's 2012 season; it'd be hard for that any things to go wrong again. The one thing Fitz has got to stop is playing not to lose, rather than playing to win, late in the game.

Wednesday: Potluck Part One (You Are Here)