Share All sharing options for: B1G 2014 // Purdue Potluck Part 2: Fishing for an Offense

Please check out Part 1 of this extravaganza for an introduction. We're just going to jump into the questions and the Magnificent Magyar food today.

Sausage on a stick wrapped in bacon and cheese 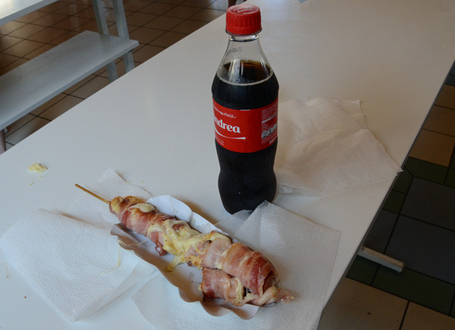 Many fans complained when Offensive Coordinator John Shoop was hired last year. He was known as a boring pro-style offense guy. He was not liked by Bears fans (unlike sausages). This is a giant understatement, but Purdue's offense was not good. Can Purdue win with a pro-style offense if they don't have the big guys up front and the talent to run it? Does Purdue have to spread it out and hurry it up to have any chance for success this season?

Mike
Yeah, I don't really understand the offensive system here. Hope ran the Tiller spread. Hazell is running the Shoop pro-style. I don't think the players were recruited for this type of system and there's always going to be a disaster of a season before things get better (see Iowa in 2012). I think things will improve but...PURDUE NO.

C4B
If the defense can produce a reasonable effort every week, and your offense can consistently move forward, you can always make some noise in the B1G. I of course don't watch Purdue football, so I can't really speak to your offensive talent, but if you can do anything close to what we got last year, you've probably got a decent shot in most games.

Green Akers
The simple answer to the first question is no, not really. Without a capable line and lead blockers, which Purdue doesn't really have right now, a pro-style will be limited at best. Moreover, 2 of your top 3 backs (Hunt and Mostert) have shown that running between the tackles isn't really their thing. Ergo, I'm inclined to think that if you want to see progress on offense this year, the system needs to be tailored to your players' talents a little better. Last year, Hazelle seemed determined to go the square peg-round hole approach in the name of installing his preferred system; it'll be interesting to see if he believes he has enough leash to stay the course there, knowing it'll probably mean another awful season record-wise.

Brian Gillis
Can Purdue win with a pro-style offense without having the big guys up front? In a word, no. It's hard be successful in any kind of offense, much less a pro-style system, without an effective offensive line. I'm not sure Purdue has one yet.

Aaron Yorke
I'm not a huge believer in the spread, so I guess I do believe that Purdue can have success with a more straight-forward approach. The spread is considered an equalizer because it supposedly takes line pay out of the equation and turns the game into a flag match between wide receivers and corners. A pro-style offense can also be an equalizing factor if used correctly. Play-action passes, screens, and draw plays all serve to use the opposing defense's strength against it. A well-coached team can make a pro-style attack work if it is fundamentally sound and avoids turnovers.

Jesse Collins
I wouldn't necessarily say Purdue needs to go to to the hurry-up to win - as that can backfire depending on your system as well - but a spread offense where you can make quick slants in space is probably not a terrible idea. Probably the worst part of the Purdue offense wasn't the skills positions so much as the abomination that was the O-Line. They need to shore that up and give them schemes that don't require as much time for plays to unfold. All that said, I think Purdue just really needs to find any identity, stick to it, and try and build of that.

DJ Carver
To be blunt, no.  It's hard to win in any scheme without the offensive linemen that fit it.  Piggy backing on that thought, having two speed backs as opposed to bruisers when trying to run a pro style offense probably won't help your cause unless you are running a ton of spread plays or zone blocking schemes to utilize that speed.  I'm not sure what Purdue's receiving core looks like, but spreading a defense out to attempt to get some quick reads may alleviate the offensive line weakness.

babaoreally
Yes, Purdue needs to spread it out and hurry it up to have a chance this season. Probably not much of a chance even if they do that, but it would still be better than trying to Tresselball it.

Let's lighten it up a bit. Glenn Robinson was an All-American at Purdue on the basketball team. His son Gelen will suit up for the football team next year. Dru Anthrop played for the basketball team and now his brother Danny plays WR for Purdue. This inter-familial sport switching is definitely not unique to Purdue. What's your school's best example of this?

Mike
I'm sure there's a better example but all I can think of right now is Blake Haluska (football) and his older brother Adam (basketball). Obviously there are plenty of father-son combinations at Iowa but majority of them involve the same sport (the Cooks and the Marbles).

C4B
The closest Indiana example I can think of (there are probably others that are better, but that would take research) is the very recent example of cousins Tevin Coleman (football) and Noah Vonleh (basketball). We've had closer relations do similar things (Jordan Hulls and his sister Kaila both played basketball, the Repoogle brothers playing football), but no examples like you laid out immediately come to mind.

Green Akers
Hmm. I'm sure there have been some cousins or something involved with different sports, but the best family examples I can think of are within the same sport- in football, the extended Bullough clan (6 players over 3 generations and counting), the Allen brothers on the offensive line, defensive back cousins Jeremy Ware and T.J. Harrell. Kirk Gibson's son Cam is currently on the baseball team, and both of Chris Chelios' sons just finished their eligibility for the hockey team, though Chris didn't go to MSU.

Brian Gillis
Michigan has a commitment from one legacy (Jon Runyan Jr.) and hopes to have one from another (Tyrone Wheatley Jr.), but those players are following their fathers' footsteps on the grid iron. A second-generation cross-over doesn't come to mind, but Michigan has its own second-generational angle, as John Beilein seems to have a penchant for recruiting professional legacies, from Tim Hardaway Jr. to Jon Horford to Glenn Robinson III to incoming freshman Aubrey Dawkins. I'm not sure why he passed on Glenn Rice Jr., other than he seems to target former non-Wolverines' offspring.

Aaron Yorke
Oh definitely the Suhey family. As the MVP of the 1948 Cotton Bowl, Steve Suhey is often credited with starting the "We Are Penn State" chant when he refused to have the team meet with SMU in regard to the participation of PSU's African-American players. Steve had three sons play football for Penn State. The most successful was Matt Suhey, was a halfback/fullback for the Lions from 1976-1979 who ended up playing with the Bears for 10 seasons and blocking for Walter Payton. To carry on the family legacy, Matt's son Joe was a fullback for Penn State from 2007 to 2010. By the way, Steve was married to Ginger Higgins, the daughter of Bob Higgins, who coached the original Suhey and himself was an All-American at Penn State. The Suhey-Higgins family is considered the "first family of Nittany Lion football."

Jesse Collins
Nebraska has had a lot of families come through. Right now the Cotton family is probably the most prevalent family. I'm completely blanking - I blame the NHL playoffs - and Nebraska fans will probably rattle off like fifty families represented on the roster right now... There's Kris Brown's younger brother about to join the team in the Fall, which is cool because LEGACY KICKERS ARE SO B1G GUYS.

DJ Carver
Maryland has one of I believe four father-son All-Americans. Joe Vellano, the current DT/NT for the Patriots, graduated from Maryland after the 2012 season as one of the anchors of Maryland's surprisingly stout run defense.  His father, Paul Vellano, was an All-American in 72' for Maryland when he attended as well.  Maryland currently has a set of brothers on the team in RB Brandon Ross and DB Jarrett Ross, the former getting the bulk of playing time.  Jarrett is currently competing for the nickelback slot on defense.

MNWildcat
Northwestern has a Dickerson pipeline, with WR Cameron being joined by his 4* tight end brother Garrett. NUMB also revived its tradition of having a twirler in the marching band in 2006, and that twirler was succeeded in 2011 by her sister! So there's that. That's...um...exciting, I guess.

Illinois has the two Cvijanovic brothers right now. Simon, the senior, and Peter, who just joined this year. Both play O-line, both are 6-foot-6, and, get this, they're both from Ohio. Man, so many similarities.

If you made it this far (or skipped to the end), thanks for reading! Please give us your answers in the comments.