This is a blog of Northern Aggression. The aggression starts at home.

Share All sharing options for: B1G 2014 // Keeping the Enemy Close - How To Hate Something That Does Not Exist

A few years ago, the fine folks over at Black Hearts, Gold Pants collected a series of photoshopped pictures for their own personal Purdue Hate Week. If you'd like to view their fine work, go here. Iowa may claim Purdue as Our Most Hated Rival, but to truly understand why you must hate Purdue, you cannot comment on it from afar.

You must live in the belly of the beast.

As those of you who have been here for a while know (or could reasonably infer), I was born, raised, and currently live in Lebanon, Indiana. For those would have no idea where that is (probably a large portion of you), here's a visual representation: 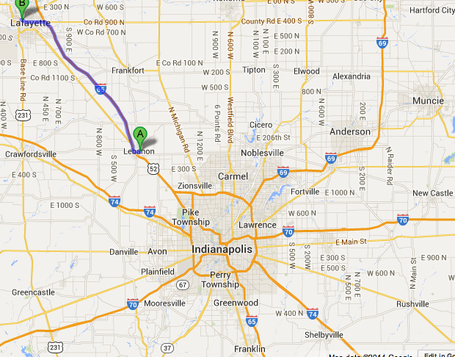 The A point, obviously, is Lebanon. The B point is what Google Maps says is the geographical point for Purdue University, West Lafayette, Indiana. So, while I do not live in Lafayette proper, let's just say I live firmly in Old Gold and Black territory.

The colors of my high school? Black and gold. A fact that only mildly annoyed me during high school, but guaranteed that no Lebanon shirts made the trip with me to IU for four years of college.

But forgive me, I'm rambling about history, which as an IU fan I've been told I'm not allowed to use when discussing the Hoosiers' rivalry with the Boilermakers. Though, of course, when history serves them well, it's perfectly legitimate to bring up in an argument. I digress.

There are many real reasons to hate Purdue that have nothing to do with me and where I live, but again, I'll be reaching into history for some of these, so if you are a Purdue fan, you can probably safely stop reading here and begin blasting me (and IU in general) in the comment section. I'll wait.

With the possible exception of Illinois, it's probably fair to say Purdue has done less with more than just about every Big Ten school ever. (Cue any Purdue fans who stuck around for this part screaming about their football accomplishments, their men's basketball conference championships, etc.) And I'm going to prove this with facts.

FACT: Purdue is around 40th all-time for most wins in football. Purdue is actually 45th in win percentage, as a couple of teams with better winning percentages have fewer wins. (Sounds good, right? Until you hear...)

COUNTERFACT: That puts them 11th among current B1G members, and only 10 wins ahead of Illinois for 12th (who has played 2 fewer years of football than the Boilers). The two teams worse than Illinois will come as no surprise: Northwestern and (sigh) Indiana. However, as I am not trying to prove Indiana football is anything resembling good all-time, you cannot turn this around to say Purdue is not bad. You are better than us at this. We are historically terrible at this. That doesn't say a whole lot about you.

FACT: Purdue has made two Rose Bowl appearances, the most recent being 2001. (Again, seems decent. Except...)

COUNTERFACT: The only current Big Ten member who has appeared in the Rose Bowl and has appeared fewer times than Purdue is...... Indiana (neither Maryland nor Rutgers has made a Rose Bowl appearance). Appearing the same numbers of times as Purdue: Nebraska (though neither as a member of the B1G), Northwestern, and Minnesota. Everyone else has appeared more.

FACT: Purdue fans are very proud of their conference leading 22 men's basketball regular season conference titles, and lord this fact over the rest of us.

COUNTERFACT: Why they like to lord that is only a little mind boggling. Teams within 5 conference championships of tying or surpassing the Boilers: Indiana (1 back), Ohio State (2 back, but have had 2 vacated), Illinois (5 back), and Wisconsin (also 5 back). I'm proud of you for being top-tier for this, but you're not exactly on your own platform here, Purdue.

COUNTERFACT: This puts them behind almost every other current Big Ten school, with only Rutgers and its men's fencing title trailing the Boilers. (UChicago also trails Purdue by one National Championship.)

Now, I'm hoping those facts are enough to convince you that it is not only welcome to hate Purdue, but should be almost mandatory. If that isn't enough (or if you refuse to process rational fact), allow me to make one final appeal to you.

Despite being the younger of the universities (IU founded in 1820, Purdue in 1869), Purdue fans always seem to characterize it (or try, anyway) as the big brother in this athletic family. They succeed at football (some of the time), they succeed at basketball (except on a national stage), and they generally just don't respect Indiana for existing. It is rare that a major Purdue sporting event goes by without a sustained chant of "IU Sucks!" I won't bother finding a link to any of these instances on YouTube, but rest assured they are there. Purdue is like that guy who just never shuts up when he does something he considers impressive, and never gives you credit for anything you've done. A lunatic fringe of their fanbase even wants the state of Indiana to change its demonym to Boilermaker to reflect their supposed superiority to all things IU. It is to that lunatic fringe in particular that I direct this message: I do not like you, I do not pretend to understand why you think you are better than me, and I cannot wait for you and the team you so love to fall on your faces. The people of Indiana will always be Hoosiers, not Boilermakers, because the state isn't called "Purdue", IT'S INDIANA, and you damn well better not forget it.