Two words: Crab cakes. End of article. Just kidding, there are plenty of foods that us Marylanders can ruin in Old Bay seasoning.

I may be brand new to OTE and I've probably just insulted three-quarters of the Maryland fan base, but I do love eating, so I'm happy to provide a slightly more organized potluck contribution than another East Coast, new addition to the B1G.

Today we'll tackle the meat of the issues, with Maryland's first season in the B1G upcoming and tomorrow we'll cater to the sweet tooths out there with a lighter, more discussion-generating chat. Let's dig in. 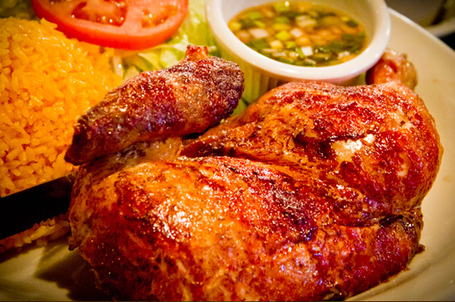 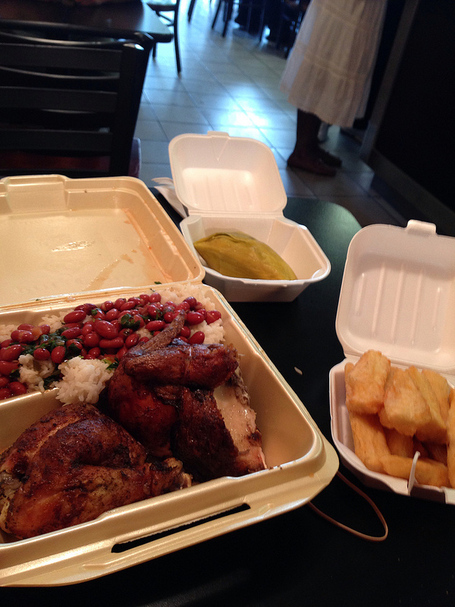 Peruvian Chicken a signature food of Maryland and the mid-Atlantic? Yup, it's true. If you ever are in town for some pigskin, make sure to stick around for some chicken(skin), too. Order a half chicken and Yucca fries and thank me in the morning. Everyone has their favorite Peruvian chicken restaurant-- whether Sardi's, Pollo Rico, Crisp & Juicy, or Pollo Primo-- it's almost as polarizing as Randy Edsall. Speaking of that guy, it's question time!

The Terps wrapped up their final season in the ACC with a winning record and bowl appearance. By the end of 2014, will Maryland have a better, worse, or similar record? What will Edsall's squad have to do to call the season a success?

Aside from what I read in the preview and Stefon Diggs, I'm not extremely familiar with Maryland as a team. I know they return 9 starters on both sides of the ball and have plenty of experience across the board and oh, and they have Stefon Diggs. Looking at their schedule and assuming they'll be as good as they were last season, I think they'll be extremely fortunate to finish 6-6. West Virginia and Syracuse aren't exactly Alabama but they still present a formidable risk. Even if they start out 4-0 and beat Indiana, their schedule turns in an absolute death trap: OSU, Iowa, @ Wisconsin, @ Penn State, MSU and @ Michigan. That's a rough schedule for any team and it's possible that they'll lose every game. Then again if they win one of those games and finish up with a win against Rutgers, they'll be bowling again. I think stealing a win in that brutal stretch and getting bowl eligible is the most important thing.

Similar. I have no problem thinking they'll make it out of the non-con at 3-1 or so, maybe 4-0 if they can walk out of the Carrier Dome winners. Regardless, I have a tough time seeing more than 2 wins in the conference schedule. Doubtful PSU, maybe for Iowa, and a good chance for Rutgers. Beating Rutgers at home that last weekend will probably decide whether or not the Terps go bowling, in my opinion.

I'm going with at best, we'll have the same record.  I think a 7-5 regular season would be considered a success given the brutal conference schedule we were dealt.  This would mean one of two things:  a) we swept the OOC and also beat one of: UM, Iowa, Penn State, MSU, or OSU (assuming Rutgers/Indiana are wins); or b) we didn't sweep the OOC, beat Rutgers and Indiana, and beat two of the aforementioned teams.  That would be good for me.  It's a tough schedule, but if the Terps can somehow avoid injuries at key positions they could surprise some.

I'd say 7-6 is certainly within the realm of possibility, but anywhere from 5-7 (or worse) to 9-4 is possible with your schedule. I'll lean similar as far as actually answering your question. To call this season a success, I'd say 2-3 Big Ten wins would be necessary (hopefully not over us), and anything beyond that is gravy (or, if you're from Maryland, probably Old Bay).

So I said this about Rutgers, and I'll say this about Maryland as well. You could be a much better team, especially considering the absurd injury luck you had last year, but have a worse record because like Nebraska, you now have to change schemes and strategies for an entirely new slate of opponents. New travel, new stadiums, new everything, can be an incredibly daunting task that even the best teams will suffer through. You have two carryover opponents, so good luck with that. If I had to make a prediction, I would probably still say bowl game, but that's because I think you can snag three B1G wins.

I feel pretty safe going under... well, at least as safe as I can feel while predicting the outcomes for a football team that I just started learning about. There only appear to be three wins on the conference schedule, and the non-conference slate isn't a piece of cake, either. Games against Syracuse and West Virginia could make it tough on the Terps when it comes to bowl qualifying. Even with the tough sledding, I still think Edsall has to go .500 to call the season a success.

I'd expect a similar record, reflective of a better, fairly experienced team but also a pretty unforgiving schedule. I don't see a sweep of the noncon, or anything better than a .500ish conference record, but that should still put you roughly in the 7 win department. I don't have the strongest sense of what expectations are in the fanbase, but the injury excuse won't fly a third year in a row. Guys get hurt, it happens to most teams; if there's any backslide at all in the record department, now that the roster is primarily Edsall's guys, the seat has to heat up pretty substantially I would think. 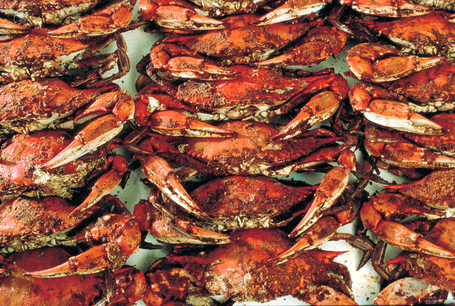 I'll spare you my thoughts on crabs' relatively high work-to-food ratio, but no one can deny the power of the food when combined with beer, friends, and beer. Do you know what else goes really well with friends and beer? Football, especially Maryland Terrapins football.

For the upcoming season, the Terps are expected to have one of the country's better receiving corps, yet its relatively inexperienced backs and offensive line pose questions heading into this fall. What are your team's biggest strengths and weaknesses coming into this season?

For Iowa I think their biggest strength(s) is their offensive line and running backs. Their weakness is their linebacker core, which was lost entirely to graduation.

Strengths: lots of returning starters. 10 on offense and 8 on defense, by my last count, and a simplified spread offense around Trevor Siemian should give the 'Cats the seasoning and firepower to slash teams to a slow, painful death. I'm worried about the run defense. The entire secondary and most of the linebacking corps return, but the 'Cats were pretty abysmal against the B1G's better rushing teams. That'll need to improve.

The teams biggest strength on offense is its receiving corps and quarterback.  I don't think the backs are a weakness given all of the playing time they've received, but none have broken out of the pack yet.  The OL is clearly the big question mark and weakness until they prove otherwise, so this could be a bad season if they can't block and give CJ time to throw the ball.

Nebraska's biggest strength is at RB where we are pretty good-to-go. Ameer Abdullah is a name that many know already, but hopefully more will know nationally after this year. To spell him, we have Imani Cross - a tank who is learning how to move laterally - Terrell Newby - probably our next feature back and a kid who can give Abdullah good rest - and Adam Taylor, who could honestly be the best of all of them, but will just be a RFr. Add to that a good class of RBs coming into Nebraska with Mikale Wilbon (4*) and Larenzo Stewart (3*) and we feel good about depth at that position. As for weakness... Well, I'm skeptical of our secondary right now because we lost a lot of starts to graduation last year. Josh Mitchell has the top CB position on lock, but it'll be a tossup on who between Jonathan Rose and Byerson Cockerell win out the second CB position. Corey Cooper is probably a lock at one Safety position, but I honestly am not sure who comes out from the carnage behind him. Maybe Nate Gerry? Basically, that's just a strange position group for the Huskers right now.

Penn State also has an experience issue on the offensive line, and wide receiver is uncertain as well after the departure of Allen Robinson. The good news is that the Lions have a great sophomore quarterback in Christian Hackenberg as well as a bunch of tight ends who can catch the ball if the wide receivers don't step up. On defense, linebacker depth is a problem for the first time in forever, but at least the secondary is returning a bunch of experienced players.

The three units I'm most excited for are the defensive line, defensive backs, and wide receivers. Despite losing two starters at DT and another contributing end, a line featuring 4-year starter Marcus Rush, first round pick to be Shilique Calhoun, and a medley of tackles including some potential impact freshmen could be the best version Dantonio's produced at MSU. Similarly, the secondary has too many capable bodies to find playing time for them all, especially at safety. Finally, the receivers made such immense improvement last year that it seems reasonable to expect a group that can match 2011's production, and only Bennie Fowler graduated. Pair that with an offseason with a set-in-stone QB who can actually, you know, throw a catchable ball and I'm expecting big things from the pass attack this year.

As for weaknesses, the two groups hit hardest by attrition were the offensive line (3 starters gone) and linebackers (2 three-year starters gone). Still, there are enough experienced pieces and promising former reserves coming back that I'm not terribly worried about either. MSU's gotten to a point where, most of the time, you can be assured that when someone goes, the next man up will be ready.