Hey everyone. Thanks for coming back by the potluck. Today we are talking Michigan defense, superfrosh Jabrill Peppers, the chances he is actually Charles Woodson, the ever-so-entertaining saga - or lack thereof - of Dave Brandon, and beer. Let's be honest, this is a very Michigan post. 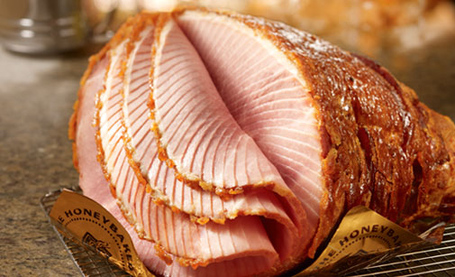 Main Dish: So as I was researching various foods from Michigan, I found out that Honeybaked Hams AND the Spiral Cut ham come from Michigan. I love both of these things - especially that crazy sauce they give you that I try really hard not to lick off the plate like a barbarian. So, in the spirit of delicious amazing things that are from Michigan, let's talk about defense... Uh, that segue sucked as well. Don't worry about it though. Just stare at that beautiful ham you wish you were eating right now.

Michigan's defense comes into 2014 with a lot more questions than answers. This was a defense that finished the season giving up over 400 yards to each of their final opponents. Needless to say, each resulted in a loss. And yet, this year, there are high expectations that 5* CB Jabrill Peppers can come in and help shore up what was a sketchy secondary and bring about a renaissance of sorts in Ann Arbor. While Peppers definitely has the speed to make a difference immediately, does he have the instinct and smarts to do so? Do you think that Michigan is just a few players away from having a truly great defense or are their greater systemic issues that were shown through last year? Is it possible Peppers is all that?

Green Akers: Look, every year there's some hotshot kid who's going to be the next Reggie White/Barry Sanders/Orlando Pace. Once in while, he actually turns out to be that good (see Clowney, Jadeveon). Might Peppers be another Woodson? Sure, he might. He might be merely an excellent player with a long pro career. He might have already topped out his talent, get lost in a pretty well-stocked Michigan secondary depth chart, make his way onto the field as a upperclassman, and be pretty good. Or he might be another 5-star Ann Arbor bust like Cissoko and Campbell before him. My point is we don't know yet, and with Michigan's depth at CB I don't think we're too likely to find out for sure this season. I haven't watched his high school film, because I save that level of creepy for MSU commits. But I hear he's impressive. There are clearly some systemic issues to solve, and the offseason moves they've made reflect that. Switching to an over front and moving Jake Ryan to MLB are probably intended to handle spread offenses a little better than UM did last year, and maybe that's all it takes for them to take that next step. But there's talent all over the place, and experience now, too. If this isn't the year, then maybe Mattison's taken this unit as far as they can go.

Brian Gillis: This is key, because as badly as the offense played, the defense might have been even more disappointing last season.  Granted, the offense struggled mightily, perhaps more so than anyone could have predicted, but struggles were expected on that side of the ball.  The defense, on the other hand, was expected to continue along the path from good to great under Greg Mattison.  If you watched Michigan play, you know that didn't happen.  If there was one constant, it was the inability to come up with key, fourth quarter stops.  That is the biggest question surrounding Greg Michigan's defense this year, not what kind of impact a freshman defensive back might have, but will the defense do a better job getting off the field.

Graham: Good question about the systemic issues. Last year's D showed flashes of solidity, but this year's squad will be more experienced and probably more talented too (Peppers on the field would be nice, he physically is ready to play). Defense is not the major question for UM, the offense is. I think we all trust Mattison too scheme well and adjust when needed.

DJ Carver: If Michigan's defense can translate their potential into on the field play, they could be one of the top tier defenses in the conference. They have a lot of talent in the secondary, but from the few Michigan games I caught last year they haven't translated all of the talent into on the field success. I think if Peppers can come in as an effective nickel corner, it's going to allow a lot more man coverage play and let the Safeties assist more in the run game. A lot of if's though, as Michigan hasn't turned potential into on the field success in a few years.

C4B: I don't really feel qualified to talk about great defense, as I've rarely seen mediocre defense coming out of Bloomington, but if Peppers can help the Wolverines not give up 47 points to IU, that's probably good enough.

Jesse: My question, my answer again! Anyhow, I think Peppers makes an impact immediately and not necessarily because he's all that, but more because I think Michigan really needs him. He obviously has the physical tools to make a difference for what was often a sad sack of a secondary (see: Indiana), and so long as this defense gets behind Greg Mattison's schemes, there really should be an uptick on that side of the ball. 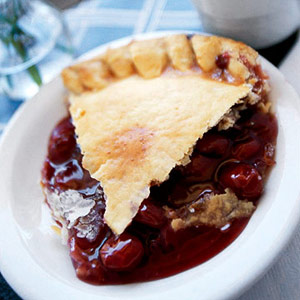 Dessert: Michigan Cherry Berry Pie - Look, I know that you all probably know of some pretty killer places to get ice cream or whatever, but Michigan has great cherries and berries and such, and it just seems ridiculous to not do a pie. Oh, and it's summer and how great does this pie sound people. Seriously...

We had a short conversation on Dave Brandon already, but I'd like to throw one more thing out there. With all of the flack that Michigan fans, and surprisingly Michigan State fans (which, if I could make surprisingly in sarcastic font here, I would), have been giving him, you'd think he would be on the way out. That said, it seems like Michigan athletics at large are doing just fine. They also are making money, which seems to be what all ADs are trying to do these days. Do you think he is getting an unfair rap from the peanut gallery or is he part of the problem with where Michigan football is going? Do you see him having a long leash if football goes terribly wrong? Does it matter that he is a businessman first? Also, would you take him over your AD?

Green Akers: Well, I don't know about "just fine." Football, the flagship, is stuck in neutral at best and decaying like the Roman Empire at worst. Hockey's search for Berenson's successor continues after they missed the tournament again. Basketball's arrival has been a great story, but not a single Michigan fan I've talked to in person seems happy with where the AD is right now and where it seems to be going. Yeah, Brandon's making money hand over fist, but he's doing it by bilking Wolverine Nation's brand loyalty for every penny he can- and maybe some he can't, if student ticket sales are any indicator. I don't think the school will boot him while he's printing money the way he is, but I sympathize with the Michigan fans I know, some of whom are being priced out of tickets they've had for decades. Considering the teams he oversees haven't had that much success, I'd be more than a bit disgruntled, were I of the Maize and Blue persuasion. And there's no way in hell I'd trade him for Mark Hollis, who I consider the best AD in the country, bar none. In addition to the Carrier Classic and a handful of other great tournaments, he's scored big hits on his coach hires with Dantonio, Suzy Merchant (women's basketball) and Jake Boss (baseball). If only we could get hockey on track...

Brian Gillis: Let me save everyone some time - Dave Brandon isn't going anywhere.

DJ Carver: From all that I have heard regarding student attendance this week, I think that Brandon is part of the problem. You never want to alienate your fanbase, especially your future fanbase (students). I think with all big football programs, you don't get a long leash if football goes terribly wrong. That is what you are measured on, and for teams like Michigan is a large part of your revenue stream. If he lets football go down hill, the fanbase will react and he'll be gone. As for him taking over as our AD....we have Kevin Anderson. I think that says enough.

C4B: As long as he doesn't sink to Morgan Burke levels of "competence", he's probably not the worst choice to have as AD. That said, I would absolutely rather have Fred Glass, no doubt about it.

MNWildcat: Money talks. Money talks, money talks, money talks. Unless Michigan isn't winning 8+ games a year regularly or turning an obscene profit, no matter what the commentariat says, Brandon will leave once the Michigan cabal decides he is. That said, I would not take him over Jim Phillips. Dr. Phillips genuinely cares about Northwestern tradition, wants to build and brand a program, and will do what it takes (miss u carmody) to win games while staying true to his school. He's a gift.

Jesse: It's been said, but Brandon obviously isn't going anywhere because he really is bringing in cash at an absurd level. Of course, we can all laugh when he does somewhat foolish things in the eyes of others. Would I take him over my AD, though? Probably not, but I don't know. I still have a lot to learn about Eichorst.

BONUS) We all know that this whole conversation is going to divert into a never-ending chat about beer, so let's hear it from the writers. For those who know about Michigan Beers, what is your favorite craft brew from the area? What is the most overrated? What brewpub that doesn't bottle should everyone check out?

Green Akers: I wouldn't say it's overrated, but Founders' Two Hearted has gotten so widely distributed that I usually pass on it when choosing my drink. Oh God, I am such a freaking hipster when it comes to beer...souring on Two Hearted because of how mainstream it's gone...well, I am about to move to Midtown Detroit. No sense hiding who I really am, I suppose.

But there is this really good helles lager from Tri-City Brewing Co. in Bay City, Hell's Half-Mile. They don't distribute too widely, you probably haven't heard of it. Arcadia Ales (Battle Creek) is criminally underrated in general, and...I'm about to speak blasphemy...I consider Whitsun to be a better wheat ale than Oberon. I'll take my lashes now, but I'll not recant. As penance to Bell's, I'll mention that their Best Brown is the best tailgating beer I've ever had. Perfect volume and flavor for fall, and a nice alternative to the pumpkin beers everyone starts circle-jerking over. And, lest I lose my freshly acquired hipster credentials, Dark Horse Brewing Co. (Marshall)'s Double Crooked Tree IPA is worth the wait for its February release.

DJ Carver: The only craft beer from Michigan I have tried is Founders Breakfast Stout. If that quality is to be expected from all other Michigan craft beers, then I'm in. Definitely looking forward to reading everyones perspective on this.

MNWildcat: Thanks for the Dragon's Milk, Green Akers. I'll chug one with you any day.

Potluck Part Two (You are here)