Let's get this Pennsylvania party started!

Share All sharing options for: B1G 2014 // Frying up some Penn State Potluck

Welcome to the Penn State potluck! When I first journeyed into Pennsylvania from my home state of New Jersey, I didn't know what to expect. Was there any good food in this state that didn't originate from a Wawa? It turns out there is, and it's not just because all the Wawas turn into Sheetzes once you get past Harrisburg. Good ole Pennsylvania loves it's greasy, fried foods just as much as New Jersey. In fact, they even named one of their towns after the Garden State. 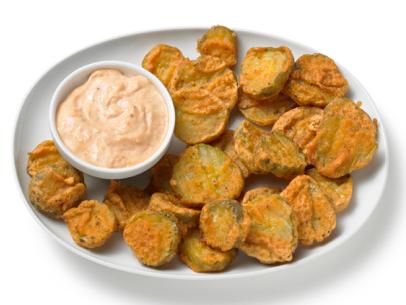 I don't think I tried a fried pickle until I was hanging out at Bar Bleu in State College during a snowstorm in November of 2011. Penn State was playing Illinois that day, and we had plenty of time before kickoff. The waitress said it would take a while for the pickles to come out, but we were just trying to get warm anyway, so why not? I'm pretty sure I was inspired by Snookie's love of pickles on my favorite reality show at the time, "Jersey Shore."

While driving west on I-80 on the way to State College, you'll pass by a town called Jersey Shore, Pennsylvania. It's no where near the actual Jersey shore, and it doesn't feature miles of fabulous beaches. So why is it called Jersey Shore? According to Wikipedia, the town was originally called Waynesburg when it was settled by Reuben and Jeremiah Manning in 1785 on the west side of the West Branch Susquehanna River. On the eastern side of the river, a rival settlement developed, and the population referred to Waynesburg's side as the "Jersey Shore" because the Manning brothers came from New Jersey. The nickname became so popular that  Waynesburg eventually became officially known as Jersey Shore. What is one of the strangest town names in your state? And if you know where the name came from, don't be afraid to tell us.

Jesse: Well, the funniest one to me is Norfolk because it is totally pronounce "Nor-fork" because it was on the North fork of the Elkhorn river, but apparently when they submitted some form of North Fork, or even Norfork, the US Postal Service decided they're obviously dumb and don't know how to spell Norfolk. So when the Weather Channel is saying 'storms in Norfolk' and pronouncing it like the city in Virginia, the people in Norfolk, NE are correcting them as they take cover. Other fun names would be Surprise, NE (due to being surprised by water or something), Valentine, NE (less cool because it was just named after a guy named Valentine), Crab Orchard, NE (crab apple tree orchard), and Monowi, NE (only because it has one person in the town, which is kind of fun).

Mike: The two strangest city names in Iowa have to be What Cheer and Sac City. If you’ve ever travelled on I-80 between Iowa City and Des Moines you’ve undoubtedly seen the exit for What Cheer and have asked yourself "What Cheer? What the hell kind of name is What Cheer?" The answer: no one knows! Not only is there an agreed upon explanation as to why the town is named What Cheer, I don’t believe there’s even an agreement as to how you say it. I think it’s pronounced Wutcheer or Whatceer or something. All I know is that it isn’t pronounced like it sounds.

And then there’s Sac City. Snicker. It seems dirty but in actuality Sac is a variant of Sauk, which refers to the Sac and Fox Tribe. So it’s not actually pronounced sack; It’s pronounced sock. TMYK.

Green Akers: Well, that would be Hell, Michigan. Unsurprisingly, it's fairly close to Ann Arbor. Rumor has it that it got its name because the founder, an ornery frontier sawmill and distillery owner in the 1830s, didn't bother to name it, was asked what he called the place, and said "Call it Hell for all I care," probably firing a shot of chaw into a spittoon as he did so. So the state authorities, being joking sorts, honored his sentiment. As I understand it, the town is unremarkable save for being a bit of a tourist trap since you can take a picture next to a sign that says "Welcome to Hell."

Funnily enough, there's also a place called Paradise, Michigan, in the Upper Peninsula near Sault Ste. Marie and Tahquamenon Falls. So far as I know, it isn't as widely involved in clever little plays on its name. The dichotomy between the two places nicely reflects Michigan's varying weather between winter and summer.

C4B: Oh, so many choices. Just to name a few: Floyds Knobs, Possum Trot, Santa Claus, Gnaw Bone, Needmore, and Prosperity. These are far from the only weirdly named places in Indiana, but they are some of the best.

babaoreally: This is my favorite potluck question ever. I am going to slightly change it to talk about funny intersections. The most racist one that I am aware of is in C4B's neighborhood. Off of an I-65 exit north of Indy, you have two choices: left for Whitestown or right for Brownsburg.

The other one is on US 24 in Northern Indiana, but it seems like it should be somewhere in Central America.

Eric Schulman: I think Maryland might have the most strange names per capita. There's Accident, Scaggsvillle, and Sunshine, MD. Oh yeah, we also have a California, MD, a Pasadena, MD, and a Hollywood, MD. Maybe Maryland really is the California of the East. Our strangest town name, however, goes to Boring, MD. The unincorporated community is home to the Boring Volunteer Fire Company, the Boring Post Office, and, of course, the Boring Methodist Church.

While not named for its lack of town excitement, Boring was instead labeled as such because of its former postmaster, David Boring. How exciting!

MNWildcat: I will put up my dad's hometown of Sleepy Eye, Minnesota, so named for the Indian chief Ish-Tak-Ha-Ba, who had a droopy eyelid. People are creative. Save that, Embarrass and Castle Danger (!!!) are good. Also, hearing non-Minnesotans pronounce things like Wayzata, Mahtomedi, Shakopee, and New Prague is also a blast. 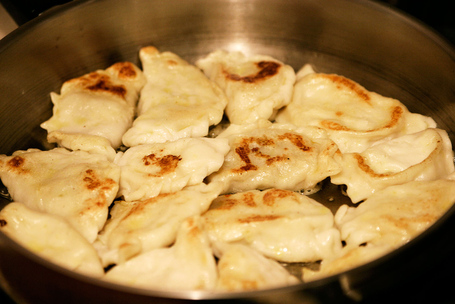 A treat of Polish origin, pierogi are dumplings filled with potato, meat, sauerkraut, cheese, or even fruit. They make great cocktail hour food at lavish parties and are even betters as finger food for more casual get-togethers. Pierogi are especially popular in the western part of Pennsylvania, where they are known to race around at baseball games and generally make life more enjoyable to everyone.

Someone who has made life more enjoyable for Penn State fans is Christian Hackenberg. The sophomore quarterback is no without his faults, but scouts think very highly of him, and it already looks like he has the potential to be a starter in the NFL one day. This is all pretty new for Penn State fans who haven't seen one of there own signal callers go on to have success in the NFL since Kerry Collins was winning the NFC Championship at the turn of the century (the jury is still out on Matt McGloin). Who is the best NFL quarterback to come out of your school, and did it look like he was going to be able to reach such heights when he was in college?

Jesse: Um, NFL QB? Probably gotta say it was Vince Ferragamo, and honestly, he was only at Nebraska for two years (and before I was born). He was a statistical leader for a long time, though, and people knew he could throw the ball around pretty well. He did start a Super Bowl for the Rams, so there's that? Otherwise, I can't think of a great NFL QB out of Nebraska.

Mike: Of all the NFL players Iowa has produced, they’ve never really produced a good QB. Chuck Long was probably Iowa’s greatest hope but he got drafted by the Lions and lord knows what happens when you get drafted by the Lions. Did it look like he was going to be able to reach such heights when he was in college? I don’t know. I wasn’t born.

GA: That'd be Earl Morrall, and it's not close. The dude played in a very different, run-dominated era, and actually had more INTs than TDs while at MSU, but still got drafted second overall by San Francisco, and won them three Super Bowls. Add in the Rose Bowl he won while at MSU, and he's pretty tough to supplant as the best QB in Spartan history if pro career is considered. Of the three former Spartan signal-callers currently in the NFL, I'd say Kirk Cousins probably has the best chance to have a notable career, as Drew Stanton has been a backup for 8 years now over multiple stops and Brian Hoyer, having finally gotten his shot after backing up Tom Brady, is about to get Johnny Football'd out of his job in Cleveland.

C4B: Well, if we're counting people who played quarterback for us, Antwaan Randle-El is probably the most successful in the NFL, though he was a wide receiver in the pros. If I must go with an actual pro QB, we're probably looking at Trent Green, who by all accounts (which I've heard from other IU fans) did NOT look like a pro prospect in Bloomington.

babaoreally: The list of Purdue NFL quarterbacks is a pretty long one, since there have been more starts by Boiler QBs in the NFL than any other college. Some names you might recall are Bob Griese, Len Dawson, Jim Everett, and Cowboy Kyle Orton. I am not leaving out Drew Brees of course; I saw all of his home games at Purdue, and I am not surprised by his NFL success.

Eric: Everyone's third-favorite host of CBS' The NFL Today, Boomer Esiason was the Terrapins' starting quarterback before being selected in the second round of the 1984 NFL Draft. By the time his playing career was over, Boomer compiled four Pro-Bowl selections and the 1988 NFL MVP award. In total, he amassed 247 TDs and 37,920 passing yards.

I didn't watch too much college football when I was between the ages of -8 and -4, so I'm not sure if he looked like he'd be able to reach such NFL heights while in college, but the record books say he set 17 school records, so I'd say his star shined pretty bright while an undergrad.

I also read this question wrong at first and decided to profile Maryland's most successful QB while in college. So, here's that: Statistically, Scott Milanovich is likely Maryland's most prolific career passer. The quarterback from 1992-1995, Milanovich holds many of the Terps' school records, including career completions (650), passing yards (7,301), 400-yard games (5), and passing TDs (49).

MNWildcat: Based on results, I guess the only leg I have to stand on is Otto Graham. Not that I've seen him play. TYPICAL OTE WRITER AMIRITE. Failing that, that Mike Kafka got a raw deal in Philadelphia. Get fucked, Michael Vick.

Graham: Michigan, Tom Brady, of course. And no one knew he would turn into such an amazing star.

Needed: Some discussion of the UM streak of NFL QB's that ended with Denard/Forcier. Grbac, Collins, Dreisbach, Griese, Brady, Henson, Navarre, Henne. Check out this for background on that streak. These are all traditional drop back passers, of course.