The potluck continues with more of the commonwealth's finest foods.

I don't think we can get any better than the Wawa vs. Sheetz discussion from yesterday, but fortunately I had a couple of delicious treats picked out for today so that we might come close. Enjoy, everybody! 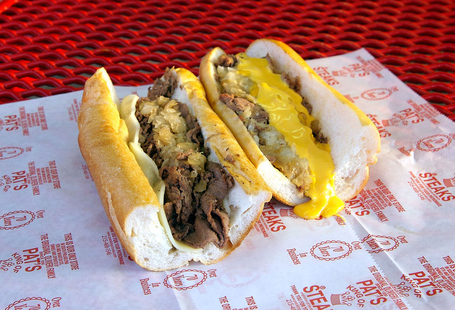 Is there any other sort of cheesesteak worth eating? Probably not, considering the sodium, cheese, and caloric content in one of these puppies, but you're allowed to treat yourself every once in a while, right? I usually find myself getting my fix at Carl's in New York City, but if you talk to any cheesesteak aficionado, they'll tell you that the best place to get one is at Pat's or Geno's in Philadelphia. Claiming allegiance to one shop or the other is a great way to start a fight in the City of Brotherly Love, but trying to decide which cheesesteak is better is like trying to figure out which of James Franklin's recruits is the most talented.

Back when Mark Emmert brought the hammer down on Penn State in July 2012, the outlook for the program was not so good. Even the most optimistic analysts thought it would be five years or so before the Lions started to compete for bowl eligibility again. Yet here were are with Franklin effortlessly bringing in four-star athletes in what is so far a top-five class for 2015. So why haven't the sanctions crippled Penn State football? Obviously it's helped that the scholarship reductions have been rolled back, but did Penn State get lucky with a pair of expert recruiters in Franklin and Bill O'Brien? Or is the allure of playing in front of 100,000 fans at Beavers Stadium too good to pass up? Maybe players care more about an NFL future than playing in bowl games these days?

Jesse: A great place to start is that you had two really great recruiting staffs under BoB and Franklin. Hats off to the teams there, and while I'm sure there is also a better Bag Man system in place out east than there is here in Nebraska (Come on. Easy jokes are easy, right? It was sarcasm, people... sorta), the recruits seem to love the idea of playing in front of the fans in Happy Valley. Also, as to your second part, I think most every kid would rather have a surefire route to the NFL than a bowl win, but that's partly because we have a BitCoin Bowl. Critical mass has been reached.

C4B: Sanctions or not, you've still got the "Linebacker U" moniker, you've not really had a "down" (like 4-8 or worse) season in a while, and playing in front of 100,000 people at night is still pretty cool. Plus, I've heard there's decent ice cream at PSU, so that's probably a plus.

babaoreally: I think the two coaches post-sanctions were both great recruiters, and that the good players care more about their NFL future than playing in the Outback Bowl. At this point, the reduction roll backs are helping out as well.

Eric: First off, while Pat's and Geno's get all the tourist attention, I'd like to recommend another pair of cheesesteak shops in the city of Brotherly Love: Larry's and Jim's. They're both just as good if not better than the more publicized pair on 9th Street.

As a Terrapin fan, it's always extra-frustrating to see top area recruits go up north to State College, so when the sanctions came down, I expected a bit of a change. Unfortunately for me and my alma mater, Penn State's top-notch staffs have been more than capable of overcoming the challenges and showcasing the still-very-appealing Penn State brand to recruits-- which most definitely includes a passionate and consistent fanbase and the reputation of pushing out a ton of NFL-ready players.

Graham: Two thoughts come to mind: 1) PSU will still recruit better players than 75% of the B1G and having O'Brien helped. 2) Sometimes there is a "we are in this together" mentality which pulls teams together in times of extreme pressure or stress. You can tell that happened to these PSU teams.

MNWildcat: I was going to make a flippant remark that "PSU is still PSU," but thinking about it more makes me wonder if it isn't the ability of JF and BOB to convince kids that it's more their entire body of work as collegians than performance in one bowl game. That, and I really do think the brand is just strong. Linebacker U is still a thing, and no doubt PSU can get defensive recruits to buy in on that. 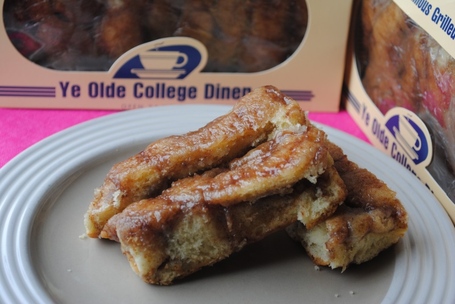 For dessert, we have Penn State's finest delicacy: the Grilled Sticky. Fried on a griddle and covered in cinnamon, Stickies are warm, soft, sweet, and delicious. They are only available (for sitting down or carrying out) at Ye Olde College Diner in downtown State College and are perfect as a late night snack or as a better version of the breakfast doughnut. Stickies have been delighting Penn Staters for many years and probably will continue to delight them for years to come. If you've already been fortunate enough to enjoy one at the Diner, go back and have another, but this time with ice cream on top.

With Christian Hackenberg and a host of defensive starters coming back to Penn State this season, there are some who expect the Lions' season to be as sweet as a Grilled Sticky. However, there are many potential pitfalls. Hackenberg relied heavily on wide receiver Allen Robinson last season, and he currently plays for the Jacksonville Jaguars. Also, graduation and injuries mean that the team will likely have four new starting offensive lineman. Can Penn State overcome these difficulties and maybe pull a home upset of Ohio State or Michigan State? What record will the Lions finish with?

Jesse: First off, hats off to much better segues than me. I just gave up after the first question last week. Secondly, I want a Grilled Sticky. That looks delicious. Now, on to the question. I honestly think this will be a rougher go for PSU for many reasons. First off, everything you said. Changing all of that would be difficult without a coaching change. Changing all that with a new staff is room for mistakes. That doesn't mean I see Penn State as last in the division or anything, but I think this has all the markings of a season where you lose the games you're supposed to and win the ones you're supposed to. Overall record? It's far too early for me to even begin to think about that.

C4B: I second the desire for a Grilled Sticky. (goes to Google Maps to calculate how long a drive it would be) Hm, 8 hours one way, might be too far to do tonight...

Oh yes, your question. If your O-Line gets on the same page quickly, you'll probably be decent, but if injuries mess with that line more, it could be a long season if you're Hackenberg. As for final record, I can see anywhere from 6-6 to 9-3 coming pretty easily, so I'll conservatively say 7-5 and hope that Indiana is one of the 5 and not the 7.

babaoreally: I am far from a Penn State (or football, for that matter) expert, so I'm going to roll a D12 and see what I get. I rolled a 10. So 10-2, I guess. That would be an impressive first year for James "Ben" Franklin.

Eric: Graduation, the NFL, and injuries always add up to challenges for teams in transition, but if I were a Nittany Lion fan, I'd trust the system and look to the next men up. I don't expect another All-American wide receiver, necessarily, but I wouldn't think doom and gloom quite yet. Regarding Penn State's season outlook, I see a solid seven wins on the schedule, at least. But what do I know? I've been closely following the B1G for all of zero seasons.

Graham: 9-3. Check out Bill C's thoughts on the matter:

Penn State might instead top out around 8-4 or 9-3 this fall, but again ... considering where this program appeared to be headed 22 months ago, that's quite impressive. And considering the youth of the team overall, the awesome recruiting, and the fading sanctions, it's impossible not to like where this program might be in a few years even if it's still having to settle for only being good in the short run.

MNWildcat: Poor Allen Robinson, man. I wouldn't underestimate the effect a new OL will have on the offense. While I think JF's offense will allow Hackenberg to make quick throws and not be stuck in a quickly collapsing pocket against better teams, Hackenberg will eventually take a hit that forces PSU to scramble.

As far as the record goes, it's totally gonna suck when we beat you at Beaver. Be prepared. Homer in me (and skeptic on JF and the OL) makes me project OSU, MSU, Michigan, and one of vs. NU/@ Indiana (YUUUUUUUUUUUP) as losses. 8-4, and not at all a dishonorable start to the Franklin Era.