Class is in session! The OTE Editors break down Academics, On-Field Projections and - most importantly - sandwiches, in the latest episode of B1G 2014 Rutgers Week.

Welcome class, to the B1G 2014 Rutgers Potluck. We'll be taking a tour of the B1G's recommended course load for majoring in Why Rutgers is Totally Awesome, with a tasty stop in each classroom.

Thanks to all of the wonderful OTE editors for bringing snacks for the class. Let's dig in!

Like our AAU brethren (ohhhhh, sorry Nebroskie...), Rutgers takes academics seriously. From Fullbright scholarships to MacArthur grants, Rutgers has been kicking ass in the classroom, with top-3 national programs in Business, Philosophy and Planning/Public Policy along with 14 other top-10 programs.

We were basically the smarty pantsiest in the Big East and AAC, both in raw academic achievement and athletics-specific educational advancement (shut up Cuse, nobody cares about your Masters in Snow or whatever the hell you do up there).

We've been at the head of the class in APR for a decade, despite a noted lack of "Jock Degrees" or special treatment for athletes (as an adjunct, I can attest to the exceptional Rutgers Athletic Department academic support staff first-hand. Frmer RU DL Ramel Meekins is a boss.)

What's great is that projections are favorable for the next few years. With the medical school finally being re-integrated into the overall University, Rutgers' is poised to realize its academic potential as a powerhouse northeastern flagship public university. Good times on the banks ahead! 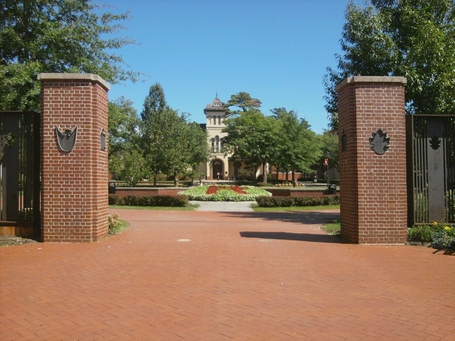 So, my fellow editors, give us the academic lay of the land. Who brings the smarts? Who North Carolinas their athletes? Is Northwestern really smart or just bad at football?

Extra Credit: How would you stack rank the Big Ten's academic programs?

I don't think there's really a "dumb" school in the Big Ten. Obviously, interacting with fans from each school will show you that no one is immune from the willfully ignorant, but overall, B1G academics are a big deal. And Northwestern is just bad at football.
However, you want a stack ranking, so here it goes.
1. Indiana
2-12. The rest of the pre-2014 Big Ten
13. Maryland
14. Rutgers (You set yourself up for this, BTW)

A ranking for Bonus Points? The teacher's pet in me kind of wants to do this
1. Northwestern
2. Michigan
3. Wisconsin
4. Maryland/Penn State/Rutgers
5. Indiana/Purdue
6. Everyone else
7. Nebraska
...And I just pissed everyone off. It's not like I have facts or anything to back that up; it's just my impression that is mostly based on East Coast Bias.

I'd probably start with Northwestern because that's what they do, then I'd go with Michigan. After that? I don't know, Wisconsin has an enormous research program. Penn State is highly regarded. Minnesota is highly regarded. And so on and so on. So, the best way to talk about all this is to say that the CIC had over $10 Billion in research, so we got academics down.

MSU's roots as the pioneer land-grant institution stand strong, as most of our agriculture programs are among the best in the world. Our education program is also a mainstay near the top of national rankings, and I believe the vet school is very highly regarded as well. The Broad School of Business has improved pretty dramatically in recent years. Finally, there's no destination but East Lansing if you want a packaging degree. And if that sounds weird, I can introduce you to a half dozen people who landed jobs on the day after graduation.

Northwestern is kind of in a class by itself as the "nerd" of the Big Ten, but nerds are cool these days, so we might have to think up new names for those people. Are "dorks" still a thing? Meanwhile, Michigan nearly as smart as Northwestern, but it doesn't have as much as a reputation because of its strong athletic teams and the fact that it's named after a state. Michigan is like the closet nerd that is great at sports and on all the teams in high school, but then he goes home and watches Cosmos while studying string theory.

Sigh...this old game. As has been said ad nauseum, different schools are good for different things, especially when there's more than one major public university in a state. Overall and by reputation, it's Northwestern, then Michigan, then it gets debatable in a hurry.

Ahem, sir, we are both smart AND not too shabby at football. At least as good as Rutgers. Really, we're better, but you're new here. We'll be polite. In terms of rankings, if you're not first, you're last. Love you all :)

All Big Ten schools have strong academics. Some are ranked higher than others in certain areas, but they are all good schools. As far as my state goes, Indiana and Purdue complement each other as the main state schools. IU pumps out the doctors, lawyers, and drummers for Johnny Cougar; Purdue has the engineers, farmers, and the first and last men on the moon.

Here at Rutgers, we like to push the envelope in sandwich deployment and fried food delivery mechanisms. That thirst for discovery and hunger for excellence led us to the most significant development in sandwich technology of the modern era: The Fat Sandwich. 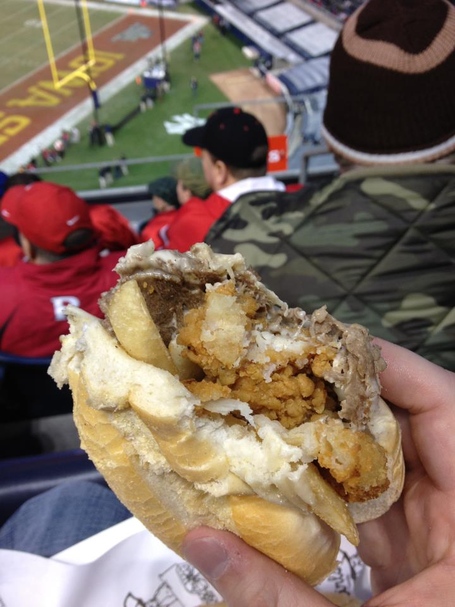 What is a Fat Sandwich you ask? It is nothing other than a deliciously fresh sub roll stuffed with any combination of fried or grilled comfort food you can ideate.

Ever wish you could get your cheeseburger and fries in a streamlined mono-sandwich format? Look no further friend, for the Fat Cat is your new best friend.

Ever wish you could crossbreed a cheese steak with chicken fingers? Of course you have! Thus you shall have the Fat Balls.

With that history of excellence in mind, my fellow OTE Editors, please develop a recipe for a Fat Sandwich that best represents your school. Fat Name and Fat Ingredient list are a must, with extra credit for beverage pairing. 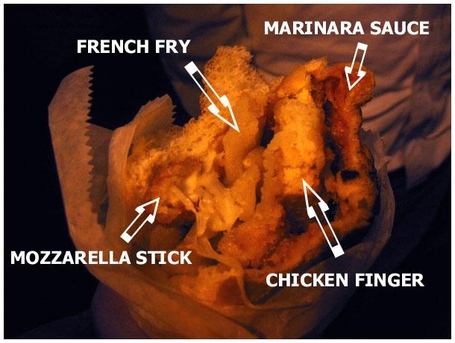 Your idea of what passes for food sounds both delicious and horrifying at the same time. And because I really don't know any better way to represent Bloomington, prepare for a sandwich that will probably also make you drunk.

Slather sauce on tenderloins. Stack them so they resemble a sandwich. Eat. Pair with copious amounts of whatever alcohol you can acquire cheaply. Enjoy.

Penn State's sandwich would be the Fat Sticky, because grilled stickies are State College's main export. Stick a couple of those, as well as three chicken cosmos and some Spagehtti O's from Roxy's (hope that place is still there!) between some bread, and you've got a Fat Sticky. Wash it down with a Miller High Life and a cookie from West Halls.

The Big Fat Red -> Gobs of steak (Nebraska corn fed only) in a saucy chili sauce, gobs of cheddar, and some cinnamon rolls as the bread. Best. Sandwich. Ever.

I guess I'd go with a fat Dairy Store ice cream sandwich. If you've never tried fried ice cream, I don't know what you're doing with your life, and MSU's dairy herd is world-class. If any Maryland or PSU fans try to preach about their sour froth being better, inform the authorities as they are clearly high on an illicit substance of some kind. Such is life when your ice cream is substandard.

A. The Fat Chicago('s Big Ten Team): layers of pepperoni and sausage patties (or insert your meat of choice here) and veggies (if you're some granola-head hippie), a healthy layer of mozzarella cheese, some tomato sauce (minimal chunks unless you're one of those heathens at Lou Malnati's) on top, and Parmesan and pepper flakes to taste. Grill and enjoy.

B. The Fat Fitzgerald: a pound of spiced-up corned beef (he's an Irish papist, after all), topped with a hearty scoop of potato salad (complete with bacon) and some cooked cabbage. Grilled, but fried if you make the dough and pinch it shut.

Statistics and Game Theory 345: On The Field Projections

Taking a look at the schedule and most Rutgers fans feel a combination of elation and browning their underoos. Ohio State? Wisconsin? Nebraska? Michigan? Michigan State? All in one season? Holy Schiano...

Let's take a stab at some projections: 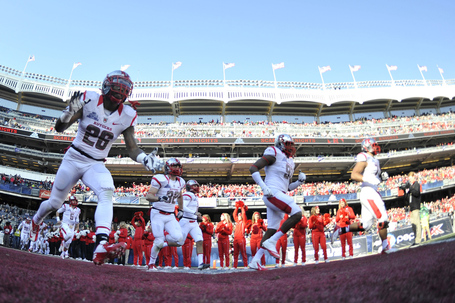 Extensions for everyone, ttfp stops their incessant chirping, and RU celebrates a wildly successful debut season.

So, fellow editors, give us a prediction as to how you think the Knights will fare in their first year of Big Ten competition. Bonus Points for showing your work!

I'll start by saying I don't have anything special against Rutgers. I'm just a realist, I've given this some thought since dropping this prediction in a comment thread a few weeks ago, and I'm sticking by it: 3-9, 0-8 B1G. Respect is earned, so go prove me wrong.

Wednesday: Potluck Part One **You are here**