Hating Rutgers: Transitioning all of our New Jersey hate to their State University

Share All sharing options for: Rutgers Hate: AD Gaffs, The Turnpike, and More!

Well, this week has been fun hasn't it?  We couldn't wait for Friday to hate on Rutgers; we got started right on Monday in the comments of their Cocktail Party.  I've debated with myself here on how I should actually attack this, since we thoroughly covered why we hate them all week.  Between the AD and the leadership at the University, I didn't know where to start.  Then it hit me!  Let's start with what we all do like about New Jersey.

Your uh...beaches in Wildwood!  No, those sucked.  They were only marginally ok when I was a kid.

Maybe your roads?  Nah, that turnpike is the absolute worst. You make Maryland toll roads look pleasant in the cost it is to drive on them.

Ray Rice?  Well, you had that going for you, but then he punched his girlfriend in the face and played the victim card.

Ok, I'm done.  We hate you.  There is nothing to like, from your worse than Detroit Camden area to your decision to fire your basketball throwing head coach and AD only to replace said AD with someone who had their own abuse scandals.  Great job!  And don't get me started on Jersey Shore, but god I think even you guys hate them, so I guess you do have something.  You guys truly are the armpit of the US.  Think not?  Just take a look here: 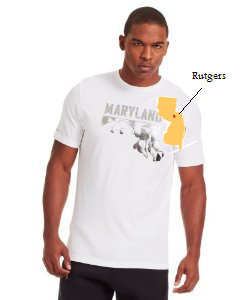 I've yet to find something pleasant about Jersey.  I didn't like going there as a kid with the trashy boardwalks in Wildwood, and I certainly hate when I need to take trips for work up to the Moorestown area.  I can see why all of your youth go away for college, since there is nothing to stay for!  They at least get it right, filling up close to a third of Maryland's student body because they needed to get away from New Jersey.  And I mean, do you blame them?  There is only the State University of New Jersey, Rutgers, to go to for the Flagship University.  Hell, even the naming just sounds like you want to be New York with the vast SUNY landscape.

It looks like you take after the SUNY network too with your fledgling athletics department and your one national championship, in fencing as you tell me.  You don't stop there.  It comes out that your basketball coach is doing this:

So what do you do?  You fire him and the AD after an investigation.  Cool.  You fired the person abusing players and the person in charge of that person.  But then you hire Julie Hermann.  Cool, I'm glad you guys went with the progressive hire by getting not only a woman for your AD, but also someone who is openly gay.  That's commendable and all, but you should reallllly look into her background first, because you know then you find out that she was abusing her volleyball players at Tennessee.  But wait, that's not all!  She also discriminated against a coach who got pregnant!  So much for that progressive work atmosphere where women are accepted as equals and all that.  But don't ask Julie about this guys, because it's not familiar to her at all, and won't resign because of it.

Man, Julie is a piece of work.  What is there to like?  You made the progressive hire, but that's about where it stops.  Let's move on from her past, and to what she's done at Rutgers.  You would think she learned from her mistakes, right?  Wrong!  There is the whole controversy between football player Jevon Tyree and Hermann claiming abuse by Rutgers Defensive Coordinator causing Tyree to quit, and Hermann's "supposed" response.  I put it in quotations because she claimed to have contacted the family, who said they'd never heard from her.  She changed her story, claiming it must have been an imposter she talked to.  WTF, really?  You can't get a hold of one of your athletes family?  Yeah, OK.

Now, let's take a look at your Universities PR department, or lack thereof.  What the hell are they doing?  What happened with Eric LeGrand was terrible, but what's worse is how you guys have seemingly tried to mess up someone who became a great ambassador for your University.  How do you call someone and offer them the commencement speech, and then say nevermind we picked someone else for political reasons.  That's just insane.  Not to mention the overly politicized reason why you got rid of your commencement speaker in the first place.  It's not like she wasn't the former President of Stanford with a doctorates degree.  Oh wait...

Anyways Rutgers, we hate you.  And really, you should hate yourselves.  After all, who do you hate more than Penn State?  Well, I hate to break it to you, but ­You are, Penn State. What did Penn State do after their scandal?  They hired a guy to replace the guy after sexual assault allegations came out.  That guy happened to be leaving a school where those same allegations were coming out.  What did you guys do?  Something arguably worse it would seem.  You fired a coach after he was abusing players, along with the AD.  Then you hired an AD that was accused multiple times of abusing players and coaches.  Kudos to you, you essentially promoted the abusing coach to your AD!  Congratulations, you have become Penn State.