I'm at a loss folks. We're entering 4 years with the same head coach and coordinators at Minnesota. What does that leave us to talk about?

Share All sharing options for: B1G 2014: Minnesota's Smartest Guys In The Room

I think you all know the general format of the SGITR post by now. Introduce everyone to the head coach and the coordinators. Frankly, that's a bit boring for to write for me. Having the same coaching staff at the key positions who have a longstanding relationships based around running the same schemes...well, you start to repeat yourself in a piece like this. So I'm going to do everyone a favor and get the basics out of the via some links...

2012 Smartest Guys In The Room - The Ted Edition

2013 Smartest Guys In The Room - The GoAUpher Edition

So...what to talk about?

Kill And Pearly Toothed Elephant In The Room 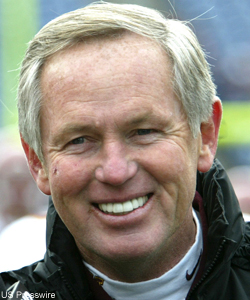 Aren't they dazzling? Via ct.yimg.com

It certainly feels like the Gophers are on the upswing. And while that's wonderful, the Kill coached Gophers haven't set the world on fire either. Which leads to some inevitable questions:

Can Jerry Kill Get Minnesota Past "Glen Mason Territory"?

What is "Glen Mason Territory?" you might be asking? For that we turn to Bill Connelly:

Back in my blogger infancy, I coined a term called Glen Mason Territory to describe when a coach achieves at a higher-than-normal level at a given school (probably a second-tier BCS program that hadn't won in a while before he showed up) but cannot ever break through to the next level; he keeps making bowl games and winning, say, 6-8 games a year, but fans begin to get impatient.  The crazies begin to start yelling things like "settling for mediocrity!" on talk radio and message boards, season ticket sales begin to fade, and even the rational fans in the base (the SBN readers, naturally) begin to start wondering if a change is needed.

If you'd like to better understand why many Gopher fans are still in favor of the move past Glen Mason despite the Brewster debacle, make sure to click over and read Jeffrick's post. Ultimately though the "Mason Line" is likely to be the standard by which Kill is reviewed and I think it's a pretty fair standard.

Will that be enough? After all, Mason got fired. For me it comes down to 2 key points:

1) Decent performance in the trophy games (i.e. keep the Axe and Pig home around 50% of the time).

2) No major chokes. Be competitive in B1G games.

Those were two things Mason could never achieve with any consistency. Rose Bowls would obviously be the preferred outcome, but let's be honest here...that's not something Gopher fans can dream about happening with any frequency.

When you talk to Gopher fans about why Glen Mason was fired you'll usually hear them reference his inability to field a team that had anything resembling a defense. Well, there's a possibility that Coach Kill has the opposite problem. The offensive performance of the Gophers in recent seasons has often been...well...offensive. There are plenty of caveats that you can point to as a fan if you want to excuse the struggles, but ultimately the fact that Matt Limegrover's playcalling often stinks needs to be addressed.

If you like vanilla playcalls, running into the teeth of the defense even as you fail, and being too predictable (run, run, pass) then you might be a Matt Limegrover guy. That's not to say he can't/won't mix it up (HI THERE NEBRASKA!), but even when he breaks out some nice pre-snap motion he often files it away again by the next game. It's enough to make a Gopher fan wonder if Kill's long-time friend and assistant may be the piece of the coaching puzzle that could keep him and the Minnesota program from reaching their highest heights.

If you bothered to read the past two SGITR posts I linked to above, you'll note that both Ted and I poo-poo'd the idea of defensive coordinator Tracey Claeys taking a head coaching job. Well, that was before he filled in for Coach Kill so ably last season. While I still don't think he goes anywhere, I'm definitely much less certain of that today compared to last year. I really like Claeys and I'll wish him the best, but the selfish part of me that is happy with what he's put together would really prefer he keep on trucking with Kill and Co. well into the future.

For All Those Who Long With Nostalgia 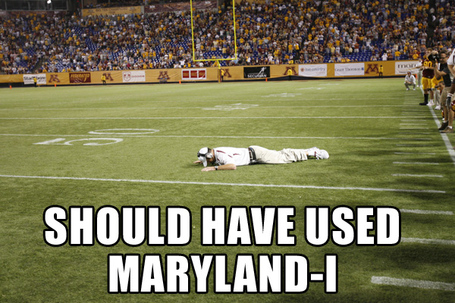 Turrible and will not be missed. See, now everyone who always complains about how sad they are about not getting to rag on Brewster anymore have an opening. I am nothing if not generous.