Share All sharing options for: B1G 2014 // The Iowa Potluck Brings the Fair Food

ED NOTE: Thanks to MNWildcat for 1. Writing these questions and 2. Adding any late editions. I had internet problems at home all week because as you know, Iowans have an internet quota and I basically used mine up. Thanks, Cory.

Iowans are known for three things: Pork, beef and corn. And soybeans. And ethanol. And poultry. Dairy stuff too. Ok so we do a lot of farming in Iowa. That corn and steak you eat on the East Coast? Where do you think it comes from? How about the bacon? Yep, that's us. Pork chops? Uh huh. We got it all.

The upside of being from Iowa and the Midwest is that you're always surrounded by the best food. We've got the best steak, sweet corn, pork chops, pork loin, chicken, bacon and ground beef. The downside is that sometimes the best food get a little routine and you have to figure out a new way to eat it. That's how fair food was born. The Iowa State Fair is known for many things, one of those things being the food that could give an elephant a heart attack. Most, if not all of this food wasn't "invented" in Iowa. But we certainly perfected it. So without further adieu, the fair food potluck. 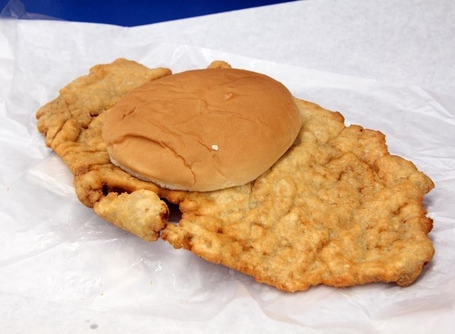 Q. Iowa's defense loses a large portion of its linebacking corps but hopes to rebuild quickly in 2014. How much will a bend-don't-break defense that allowed 5.54 ypp in 2013 be able to recover from the loss of Anthony Hitchens, James Morris, and Christian Kirksey? When teams choose not to test a run defense that ranked 19th in ypg in 2013, can the back 7 bend enough but avoid breaking?

Mike Jones: I would expect non-conference teams to go right at Iowa's linebackers and defensive backfield. And yeah, I expect some struggles early on but there are some positives. If Hitchens, Morris or Kirksey weren't there Quinton Alston would have been a starter and Reggie Spearman has the potential to be another Christian Kirksey (athletics and all that noise). I have major concerns about finding the third linebacker and pray it isn't a walk-on. Iowa doesn't face a passing attack worth respecting until Indiana but by that point they'll have figured it out for the most part. I hope.

Jesse Collins: I mentioned this a little earlier in the week in the comments, but I think that there could be some weaknesses for Iowa, especially vs. teams that like to exploit the middle of the field on short 3-4 yard passes every single down and teams with credible passing games. That being said, I'm guessing the defense remains alright in the larger scheme of things. I would not be surprised to see the LB corp look pretty good by the end of the season due to having a stingy d-line.

C4B: Considering I don't know who any of those people are, I'm going to guess they were extremely important to the team (as seems to happen when I forget Iowa people), and thus I will say Iowa's defense will have great difficulty recovering from their loss. They might even need to bring an offensive lineman over to help, though I couldn't tell you who. And as someone who has watched a defense known more for breaking than bending, I don't think you should count too strongly on it being a thing, because that's when it's most likely to fail.

MNW: We'll see you soon enough. I like what team who throw a dink-and-dunk passing game can do to a green linebacking corps, and I want to see what Northwestern can do. That said, Iowa's non-con schedule may screw them here. I only trust Ball State to really test the Hawkeyes back seven before Indiana, and I'm curious to see how well they adjust coming out of a bye to our All Saints' Day matchup. Totally uncertain. In uncertainty, I think I need to pick against Iowa at least once, if not twice, before the Northwestern game. 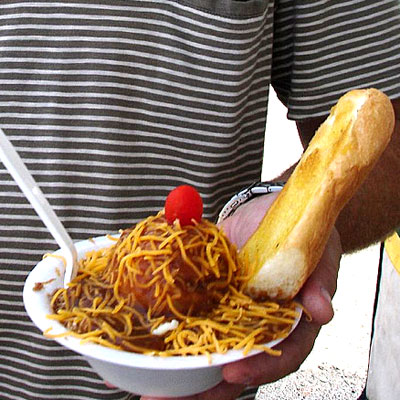 2. The Hot Beef Sundae - Uh, it's exactly what it looks like. Instead of ice cream with a bunch of chocolate and all that nonsense the hot beef sundae replaces the ice cream with mashed potatoes, the chocolate with beef gravy and all those sprinkles with roast beef, cheese and tomatoes. It's a hot mess. And you're a hot mess after having one.

Q. Time for offense! Namely, Iowa has one, and lots of people are coming back! So that's something. Rate returning QB Jake Rudock relative to the rest of the Big Ten. Points for showing your work.

Mike Jones: Stave looks like the most competent Big Ten QB at times...and then makes some of the most boneheaded moves I've ever seen. I like Siemian but he can't run worth a damn and I don't know if Northwestern just NEEDS a guy who can run. Speaking of someone who can't run...Tommy Armstrong Jr. I feel like this. Stave > Rudock > Siemian > Leidner > Armstrong > Etling > Illinois guy.

In all seriousness. Holy shit is the West a potential wasteland. I wrote this question hoping for real #HotSpr0tsTakes on B1G quarterbacks, and I realized that there is just absolute shit at that position in the B1G. Jesus. I am not high on Stave, who is a Wisconsin game-manager (like a poor man's Tolzien) at best, I am not high on Rudock, and I am homerishly high on Siemian's talent if Northwestern gets back to its West Coast style. So I will go out on the homerest of limbs and say Siemian means the most to his team in 2014.

Jesse Collins: Um, Rudock is a quarterback who plays for the University of Iowa? I don't know. Basically, the B1G West QB rankings are all over the place this year and whichever team has a decent-good/great year will probably win the division. Last year Rudock was an 18/13 split in TD/INT and a pretty mediocre 6.9 YPA. I think he's probably a lot like Stave, though, and then you have question marks all over the board. This was a long drawn out way of saying I think Rudock is okay, and I have no idea how good he'll be this year.

C4B: Well, since Iowa was the second-best team in the Legends last year, but the new West Division loses Michigan and Michigan State, while gaining Wisconsin, Illinois and Purdue, so Iowa's still probably in contention to be the second best in the West, which should translate to Rudock being the first or second best QB in the West, except the West is probably the weaker overall division, and even some of the East's weak teams have strong quarterbacks, because team strength isn't indicative of actual quarterback strength specifically, so therefore, I say Rudock is about the 6th or 7th best quarterback in the B1G. (Did I show enough work for you?) (Ed. note: That'll do, CfB. That'll do.) 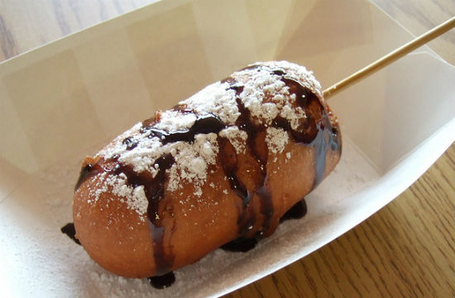 3. The Deep Fried Snickers - Does this really need an explanation? You can find anything at the Iowa State Fair. Fried butter, salad on a stick, fried candy bars etc. It's a Snickers that has been deep fried. Wilford Brimley sees one of these and calls LifeAlert.

Q. Most Iowa things ever: a stable of competent running backs ripe for injury--I mean, a big season filled with 5+ ypc averages and a solid scholarship punter. Yet there are question marks in the kicking game, as Mike Meyer will be tough to replace. How many of our favorite Iowa memes (AIRBHG, multiple scholly punters, or even falling prey to multiple fake punts and insides) will come true in 2014? Conjecture is appreciated.

Mike Jones: Connor Kornbrath turns out to be a Transformer, the Puntatron 2000 and can punt the ball 95 yards. With this in mind, Kirk Ferentz punts on first down every game and pins the opponent deep. Iowa's stout defense either forces an interception for a touchdown, a safety or nearly blocks a punt, allowing Iowa to kick a field goal upon being returned the football. Wins every game 13-0 and goes on to win the National Championship.

Jesse Collins: The Huskers broke Iowa's inability to cover a fake punt meme... It made me sad.

C4B: Because I love memes, I will say ALL of the memes happen to Iowa. Even the memes Cory forgot (OMHR, the battle over Counciltucky, Quadrangle of Hate, etc).

MNW: First off, I just need to put this somewhere. We get it, Iowa. You have a cute little state fair. Come up to Minnesota sometime and see how it's really done.

Secondly, I can't wait to see Ball State burn Iowa on an onside kick to open the second half this year. There's my #BOLDPREDICTION for this season. If that comes true, Mike Jones owes me beer from now to infinity. Save for that instance, I expect (but don't hope for) at least two RB injuries that cost upwards of 3 games, a lynch mob forming outside Greg Davis' office, and Iowa fans consoling themselves at least once by saying that some team winning a rivalry (or hotly contested) game meant that "It was their bowl game, anyways." 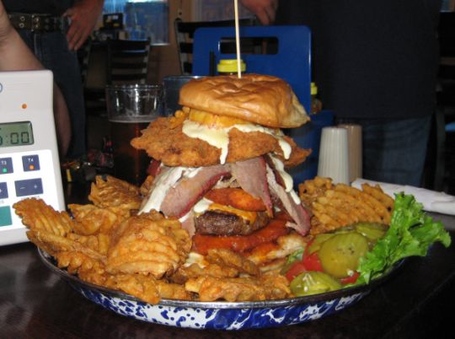 4. The Adam Emmenecker - What if I told you that you could get all of Iowa's best fair food on one sandwich? Well, I give you the Adam Emmenecker. Named after the ex-Drake great who lead the team to the NCAA Tournament, Jethro's in Des Moines has created a sandwich that Adam from Man v. Food couldn't even eat. It includes an: Angus steak burger, brisket, applewood bacon, fried cheese, chicken tenders, melted cheese sauce, white cheese sauce and a pickle. Look at that thing. It scares small children.

Q. BEER. Iowa sings about Heaven's lack thereof after they win games, and the state itself has some excellent microbrews. So, share your school's best boozy tradition and the shittiest beer you drank while in college.

Mike Jones: Tradition? Iowa? Uh...drinking. Beer bongs, beer pong, flippy cup, bags, whatever it takes to drink...we did it in college. And after we win? The band plays In Heaven There is No Beer. We love us some beer. Vodka Samm took it too far though. The best shittiest beer I drank in college was KUL LITE. Oh god it was terrible. Terribly delicious that is.

C4B: IU's best boozy tradition all depends on who you ask. Since I'm the wrong person to ask regardless, I'll just list off a few of the ones I've heard of. There's Sink the Biz (primarily at Nick's), the Hairy Bear (Bear's Place), T-Shirts and Breadsticks (Kilroy's on Kirkwood), Little 5 Week (also arguably a bike race), Tailgating (never lost one yet), The Century Club (Yogi's), and probably countless others that I've forgotten/not heard of. As far as shittiest beer, that "honor" goes to Corona Light, a beer so bad I neither finished the one I had nor will I be drinking one ever again. If you ever wanted to know what Candystripes isn't drinking this week, you can always guess Corona and be correct.

MNW: That picture has me at full mast. Just saying.

Northwestern does Dillo Day, in which nerds get drunk all day, listen to free music on the Lakefill, and get drunk all day. My freshman sure, year in which I was 21, Dillo Day involved LaCrosse Light, from beautiful LaCrosse, Wisconsin. That was pretty awful. But Keystone Ice remains the worst. During Northwestern's Dance Marathon (for a good cause), a bunch of non-involved friends and I participated in Drink Marathon, for an equally shitty cause (destroying our livers). Also good.

I look forward to story time in the comments.