Seriously, there just aren't a lot of reasons for me to hate Iowa. Let me explain...

When Nebraska joined the Big Ten back in 2011, one of the more exciting things for us was the hope that a new era of hate-filled relationships would be created. The one common factor among hate-filled relationships in the B1G, however, was that while everyone had their rival, everyone also hated Iowa. Minnesota chanted it, Wisconsin owned up to it, Northwestern pretended it didn't when it really did, Penn State hated the random losing, Michigan and Ohio State hated it because there was someone getting attention they so dearly wanted and needed, Purdue hated Iowa because Delany told them to, Illinois hated Iowa because their schools both started with the letter I, Indiana hated Iowa because they always scheduled them as homecoming, Michigan State hated Iowa because Michigan State believed there was some drawn out conspiracy by the Illuminati and Iowa to invade East Lansing and steal all of their assets, and so on and so forth. Now all this hate towards Iowa seemed manufactured from the outside, but since we've been here, we've started to learn that this irrational hatred is ingrained into your being. It's like you read books on the subject as a child. 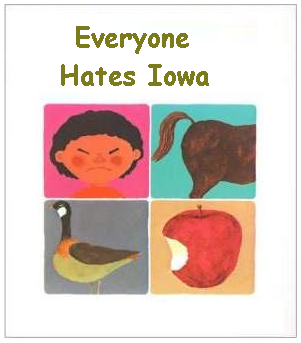 Anyhow, in his infinite wisdom, Emperor Delany introduced Nebraska to hating Iowa right off the bat and started touting a new border rivalry. The game was set on the old Colorado, "Friday after Thanksgiving day," and guaranteed national coverage was had. Hell, Hy-Vee even got in on the fun, and before you knew it, Nebraskans and Iowans started hating each other.

But honestly, that's not what happened at all. You see, the really depressing thing about hating Iowa is that it generally is like looking in a mirror and hating ourselves. If you drive from Lincoln to Iowa City, you see very similar terrain, meet pretty much the same exact people, see the same Casey's, hate the fact that you're in the car the same, etc. The two states might have different views of each other, but if you were to pick a random small town out of a hat, you'd have trouble telling which state it belongs to. The only thing Nebraskans and Iowans had against each other before we joined the B1G was this idea that Nebraska was a pompous asshole with some football prestige, and Iowa was a somewhat proud, definitely insecure, group who hated that Nebraska was still pompous despite really not doing anything special for the better part of 20 years.

Unfortunately, that's gone too. As every Iowa fan points out, Nebraska is now pretty much like Iowa in football too. Good, not great seasons. Annual batshit crazy losses that make sense to almost nobody. A few close wins. A whole bunch of fans getting huffy over everything the coach does or doesn't do. (Note: We all hate our Head Coaches until we don't. I do like the slightly revisionist history by Iowa fans on their feelings towards Ferentz's contract. Look, I don't think paying him as much as you do is the problem. That buyout clause, though? It's like your AD doesn't understand incentives. Didn't he read Freakonomics?) The few things that maybe I could hold on to - mainly that we had football on our side - was taken away and as I stare into the dark waters of the Missouri River, all I could see was the sad reflection that is Iowa (that and probably some dead cow carcasses).

So, while everyone else managed to find reasons - real or not - to hate Iowa, I just got kind of emo and depressed thinking about hating Iowa. The reality is that Nebraska really only hates Iowa because it's what we're supposed to do With the impending QUADRANGLE OF HATE... wait a minute, let's get a picture of this: 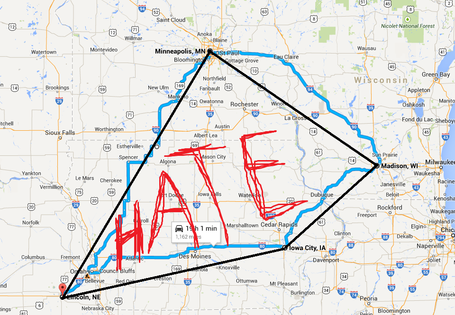 As I was saying, with the impending quadrangle of hate, we're one of the hopeful cornerstones of what's supposed to be contentious hate-filled rivalries. But we never were able to do hate like you all do. Yeah, Iowa beat us last year, but it still doesn't feel like they've done too much bad to us. I mean, they make delicious Pork Tenderloin Sandwiches. What is there to hate about them? They're practically harmless.

I think I figured out the problem, though. Remember how I said that this hate has been indoctrinated into you all since you were kids? I think that actually has some merit. So, today's charge to the OTE Community is to help me hate Iowa. I mean, the whole thing about it smelling will only get you so far because come on... have you been to a farm before? They smell. It's a thing. I'd take a farm over a meat-packing plant any day, though, and we all have those. No, I'm looking for some scientific reasons. I'm looking for over-the-top proof that Iowa is worth hating like everyone else. Let's get going people. Let's hate Iowa together. After all, I really do wish I could hate Iowa, I just don't know how.