Wisconsin fell short in 2013, with a disappointing finish to the season. Can the Badgers recover and take advantage of their new division to snag a B1G Championship?

Oh, what could have been. Do I really have to talk about last season? Can't I just pretend that it didn't happen?

Okay, okay, maybe that's not fair. I mean, there are certainly other B1G teams that had way worse seasons. Wisconsin won nine games last year. That's a lot. And, you know, way more than teams like Iowa, who only won eight.

But... if I'm being honest, last year kind of sucked. This is partly because of the loss in the Capitol One Bowl to South Carolina (5 TDs for Shaw? Really? Ugh.). And partly because of the horribly controversial loss to Arizona State (if I ever meet a Pac-12 referee...). Oh, and the heartbreaking near-comeback loss to OSU. And let's not forget the end of season loss to Penn State, which killed Wisconsin's chance at an at-large berth in the BCS.

Truth is, I've become spoiled as a Badger fan. That three year run from 2009-2011, with double digit wins every season, well, it gave me really high expectations. The 2012 season was a bit of a letdown, and last year was marginally better, but unless the Badgers are playing in at least the B1G Championship, I'm disappointed.

Oh god. I sound like a Michigan fan. I need to stop that.

Okay, back on track. Focus on the positive. Last season had quite a few for Wisconsin. New coach Gary Andersen proved that he could come into a power conference and hang with the best of them. And Melvin Gordon continued the Badgers tradition of churning out exceptional RBs year after year with his impressive 1,600 yard season.  Corey Clement had a breakout season, suggesting that the days of Wisconsin having a 1-2 punch in the backfield are far from over.

On the defensive side, the switch to a 3-4 defense went well, for the most part, until the end of the season. But... the Badgers lost a whole lot of that defense in the off-season. It's an open question as to how the team will rebound without stars like Chirs Borland and Beau Allen.

The good news for Wisconsin is that the division realignment has only helped them. Their schedule isn't the easiest, as they open the season with an (almost) away game against LSU, but they completely miss OSU, Michigan, and Sparty this year, and the competition in the West isn't really significant enough to make me that worried. Barring a surprise loss to Northwestern or Iowa, the Badgers look to be the favorite out of their division.

Melvin Gordon and Corey Clement. The Badgers once again have a fearsome running game, and I'm expecting at least 2,800 yards combined from the two of them, and I wouldn't be entirely surprised if they threaten the record that Gordon and White set last year. The O-Line returns quite a few players, including Rob Havenstein, Dallas Lewallen, and Tyler Marz, and early reports suggest that it could be quite dominant in the upcoming season.

Well... the wide receiver corps is questionable, at best. Now that Jared Abbrederis is playing for the Packers, and Jacob Pedersen is suiting up in Atlanta, the Badgers have to hope that Jordan Frederick and Kenzel Doe step up in ways that they haven't in past seasons. There is some additional talent potentially available in Alex Erickson, Reggie Love, and Rob Wheelwright, but the WR corps is far from a position of strength for Wisconsin this year. And that was before Wisconsin lost two of its incoming receiver recruits.

The strength at TE might help out here, at least a little bit, considering that Sam Arneson and Derek Watt, who will provide a bit of additional help now that he's lining up as more than just a fullback.

I really don't know where to put the questions at QB for the Badgers. Joel Stave has a gimpy shoulder, and Tanner McEvoy is just about the definition of unproven. McEvoy only completed 5 out of 13 passes for 82 yards in the spring game. Sure, he's had plenty of time since then to improve, but I'm not sure that I'm willing to bank on him winning the starting job and running with it.

And about that shoulder... Stave has been recovering from an injury sustained in the bowl game against South Carolina at the end of the season. He didn't appear in the spring game and it's anyone's guess how he'll do when it comes to suiting up for real again.

Despite significant losses on defense, Wisconsin does have some returning talent that could make an impact for the Badgers in 2014. Michael Caputo should make an impact at safety, and I think Sojourn Shelton should once again lead the Badgers in interceptions this season, hopefully topping last year's total of four. Combined with the play of Darrius Hillary and Devin Gaulden, I feel moderately good about the Badgers' secondary.

The Badgers lost six out of their seven starters in the front seven. Ouch. Andersen is optimistic about the new crop, hoping that they'll embrace the 3-4 and Dave Aranda's defensive philosophy. I certainly think that this could happen... but I also think that it's more likely that the Badgers are looking at a bit of a bumpy road on the defense this year.

Last year, Wisconsin had a combined Special Teams Efficiency rank of 50. That's not great, but it is 6th in the conference. The strength last year was the kick return game, with weaknesses in punt efficiency, field goal efficiency, and opponents' field goal efficiency. I'm hopeful that the first two will improve this season... I mean, it can't really get much worse, right?

As I mentioned earlier, the Badgers get a pretty nice schedule in 2014. They've got a tough match up to start the season with LSU, and road games at Iowa and Northwestern that could easily add hiccups to the season. But missing OSU, Michigan, and MSU? While I don't like it in the whole lack-of-exciting-games sense, I'll absolutely take that if it means the Badgers are that much closer to a B1G championship game berth.

As for the LSU game... Well, it's not good that it's nearly a home game for LSU as it's taking place in Houston. Of course, LSU will be trotting out a new quarterback, but the Badgers need to make sure they don't sleep on Leonard Fournette. Not that sleeping on the #1 overall recruit in his class is likely, but you know.

If you're talking to a Badger fan...

Melvin Gordon's chances at the Heismann and the Doak Walker award. Or your thoughts on Wisconsin's potential all-red uniforms. 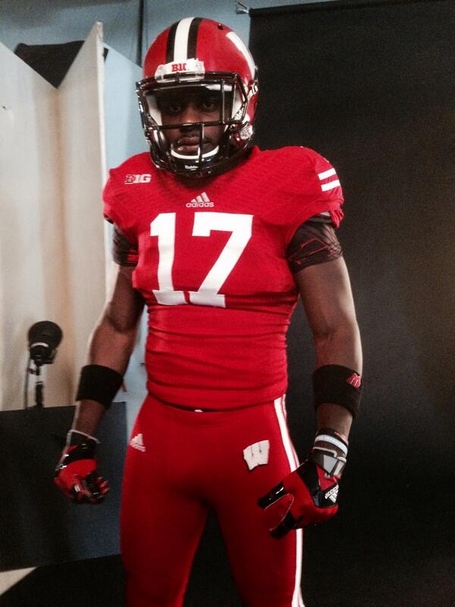 Bret Bielema. Or the state of Arizona.