Share All sharing options for: B1G 2014 // The Minnesota Potluck Continues with Hockey, obviously

Hello again OTE. Yesterday we touted the beauty of the casserole, and hopefully our Minnesota friends got the point that there is only one name for the dish of Campbell's soup. Today, however, we're going to go with a Minnesota staple and everyone will be talking hockey, other random sports, big breaks, and bad losses. So again, pretty much same old, same old #B1G. POTLUCK PART TWO Y'ALL!

Main Dish: The Jucy Lucy - It's a Minneapolis staple, and it's delicious looking. Matt's Bar (link in the aforementioned Jucy Lucy type) has been serving this up for a while now, and it's basically a cheese-stuffed hamburger. Kind of amazing if you ask me. So, from one Minnesota to another, let's talk hockey (as if you all didn't do that yesterday).

This is what we call a slight veering off the road, but stick with me for a second. Minnesota went to the Frozen Four last year - for those uninitiated, that would be the hockey version of the Final Four, and if you didn't get that by context clue you probably should feel shame right now - and put up a fight in the championship against Union. By all accounts, it was a very entertaining run, including an incredible late goal against North Dakota. So this is the part where we congratulate them by talking about ourselves. Rather, let's chat a little bit about what your school does great other than football. I feel like now is a great time to take pride in that bowling team.

C4B: I'll go with the sport that has brought 8 national championships home to IU: Men's Soccer, whose last title came in 2012. In addition to the 8 national championships (each represented by a star surrounding the IU logo on the men's jerseys and other apparel), IU has made the postseason all but three times in their history, and last missed the postseason in 1986. They have also won the conference championship 14 times, as well as 12 Big Ten Tournament titles. Suffice to say, while the success of our men's basketball program is more well known by most, we're pretty good at other things too.

babaoreally: Purdue has had some success with women's golf. National Championship in 2010, 2nd in 2007 and 2011, and top ten finishes eight out of the last nine years. As far as non-sports competitions go, Purdue teams do pretty well in the Rube Goldberg contests.

As for other teams, the women's hockey program is kind of sort of really ridiculously strong. Volleyball has been doing pretty well too.

Green Akers: Well, Izzo's been running the conference in men's basketball and making noise in the NCAAs for about 20 years now. Rick Comley won our third hockey natty in 2007, and then quit doing his job, so the hockey program's still being resuscitated somewhat. We, like most of the rest of the conference, field a decent women's volleyball team as well.

But if you want to know this author's personal participation in a strength of MSU's...Model United Nations. Thanks to the strong international relations bent in James Madison College, MSU has a constant supply of capable and interested participants, and there's nothing quite like unwinding after a long day of dominating the committee room by running the Ivy League's shit on the dance floor as well. We also take their women. #spartanswill

Aaron Yorke: Really, what's the point of being good at something other than football? As you know from reading the Penn State potluck, the school is good at making Grilled Stickies. There's also a pretty sweet creamery on campus that makes delicious ice cream. In sports, we win a bunch of championships in fencing and women's volleyball. Basketball just got verbals from a pair of top-100 recruits for 2015, so let's pencil in a title there as well. As far as academics are concerned, meteorology and supply chain management are top programs at PSU.

More Orange: Hey, guess what? Illinois has something nice is this department: Golf. Yeah, that's right. Golf. They're like the Alabama of golf. Just this past season they had three All-Americans, Coach of the Year (Mike Small, the golfman's Nick Saban), and Team of the Year. Ain't nobody beat the Illini at golf.

MNWildcat: Women's lacrosse is an obvious one, but might I mention Northwestern women's tennis? They've won a Big Ten title in some form every year for 16 straight years. That's pretty damn good. They did it in dramatic fashion in 2014, coming back from 3-1 down against #17 Michigan to take the last three singles points and win 4-3.

DJ Carver: Maryland excels at (you guessed it!) mens and womens lacrosse, field hockey, and soccer. On the mens side, Maryland is a contender year in and year out for lacrosse, making frequent trips to the final four (but seemingly always falling short). With regards to the B1G, I'd only guess JHU will challenge us for a while until you guys get your programs going (I'm looking at you Sparty). Women's lacrosse should just scrap the season and hold a national championship game between Maryland and Northwestern every year. That's about the extent of both teams dominance. I believe when I attended, field hockey won national championships in 3 of the 4 years, which is pretty impressive. Maryland soccer has been fairly dominant the past ten years (calm down Indiana) and looks to challenge Indiana year in and year out for the B1G title.

Jesse: Women's Bowling y'all. We're pretty great at that. Oh, and Volleyball. And we're not too bad at track. I'll let the Nebraska hordes tell you all of the other things we're good at. I'm sure I'm missing things. 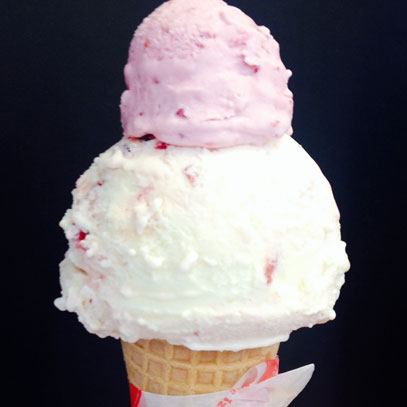 Dessert: State Fair Food - So it was mentioned yesterday, but Minnesota has a humoungous state fair with lots of fried things and ridiculously terrible for you things. That being said, while browsing this year's menu, I'm choosing the Jello Salad Ice Cream, because that's probably the most midwest thing ever.

Let's end again on football, though... Minnesota was finally on the receiving end of some good fortune last year as Indiana did the ol' throw the ball backwards and not pick it up play. Classic Indiana... Anyhow, what is the one play you can remember your team getting absolutely heartbroken by, and just for fun, how about one where you broke somebody else's heart. I'll be waiting in the corner with the GIFs.

C4B: Gee, I feel like you already covered this one pretty well for me. I honestly can't think of one play that was Indiana breaking someone's heart, unless there's a specific moment from the Penn State game last year anyone can point out, because Indiana so rarely gets to play spoiler in football. Near misses, sure, but few actual successes. I mean, maybe one or two game winning field goals to claim the Bucket, but I don't know if those were that heartbreaking for [REDACTED].

babaoreally: The Kyle Orton fumble against Wisconsin was the bad one. Drew Brees throwing it to a wide open Seth Morales against Ohio State was the good one.

GoAUpher: The casserole bit wasn't enough? You had to ask this one during Minnesota week? I HOPE NEBRASKA IS ATTACKED BY LOCUSTS AND BO PELINI IS ALLOWED TO TAKE YOU TO A FOOTBALL PURGATORY FROM WHICH YOU NEVER EVER ESCAPE AND THAT RUNZAS ARE ALL YOU CAN EAT AND MAKE YOUR POO FEEL LIKE BURNING FOR EVER AND EVER AND EVER.

Green Akers: Nope nope nope nope. I told you after the Rose Bowl that Sparty No! is dead, and I ain't going back. Seriously, I don't think I could even pick. Blowing a 20-point lead over Notre Dame when I was a freshman in 2006 was a pretty harsh introduction to that tradition, I suppose. 7 got 6 stands out, too, but we've given a few such moments ourselves, including a couple of upsets over highly ranked Michigan teams (suck it Desmond Howard), Rocket against Wisconsin, and of course the final dispatching of Greivis Vasquez in a Maryland uniform.

Aaron Yorke: Before I got to Happy Valley, there was the 1999 team getting upended by Minnesota. After I got to school, the 2005 squad was trounced by a mediocre Michigan team on that heart-wrenching pass from Chad Henne to Mario Manningham. Did we get someone that good recently? Not that I can recall. When you type in "Penn State upsets" into Google, you get a bunch of basketball headlines, along with the hockey win over Michigan from last year. I think my favorite basketball upset was when the Lions beat a stacked Illinois team on the road in 2006.

More Orange: I'm not giving any gif for this because they two plays, good and bad, that come to mind aren't really plays, but moments. The bad one being during the 2007-08 Rose Bowl against USC. Here was Illinois venturing into the long-forgotten, often-whispered grounds of the Pasadena. A season's worth of awesome swelled into the greatest level of anticipation in since--- I'm not sure of the last time. And then, with less than five minutes into the game, USC rolled down the field to score easily and intercepted the Illini during the next possession. At that moment, we knew the dream was over. But also during that same season came the extreme upset of #1 Ohio State.

Leading by one touchdown in the fourth quarter, the Illini burned 8 minutes and 9 seconds of clock to complete the victory. Five first downs later (all being minor miracles), including a 4th-and-1 at the Illini 33, and the Illini were the Kings of Saturday SportsCenter. It was a great weekend to be alive.

DJ Carver: Biggest letdown recently? Losing to FSU at the end of the game on a dunk in the ACC tournament. Owell, we're #B1G now. Biggest upset? Sweeping the South Carolina regional in baseball, taking out USCe in both matchups where they had previously won 28 straight at home in the regionals.

MNWildcat: Get fucked, Jesse. Get. Fucked.

(Note: I wanted to find the Nebraska-Minnesota forward fumble first down, but couldn't snag the GIF. If it makes you feel better, just look for Virginia Tech beating Nebraska at the last second, The Miami missed 2 PT Conversion, Texas :01, etc. We've had our fair share of bad breaks.)