Share All sharing options for: B1G 2014 // The Ohio State Potluck is bringing the Sad Pizza, Braxton Miller, and Playoff Hype

We are nearing the end of our long offseason, but that doesn't mean we would ever let an opportunity for a potluck slip away. After all, this is the Midwest. Of course, I'm not an Ohio expert, and Skyline Chili sounds awful. After something like a minute or so, I realized what would personify Ohio State perfectly:

So let's call this Potluck the "Papa John's Sad Pizza Edition." Urban Meyer would be so proud.

Appetizer - Papa Johns Cheese Sticks: You know, I always found the Cheese Sticks to be so dumb. Why would I buy what was essentially a cheese pizza when I was already ordering pizza? It was completely unnecessary and felt like Papa Johns being all like, "Hey, give me all your money." Then I got them, and I have to admit, they're pretty delicious. This paragraph has little to do with the question, but URBAN MEYER SAD PIZZA!:

Last year, Ohio State finished the season off in pretty dismal fashion. A close win over Michigan, a loss in the B1G Championship Game to MSU, and a loss to... SAMMY WATKINS JUST CAUGHT ANOTHER PASS... Needless to say, it wasn't exactly a shining moment for the Buckeyes. Going into 2014, there are questions about the defense and people are beginning to wonder if the Buckeyes are more like their 24 game win streak or the 2 game losing streak. What do you expect out of Ohio State this season? Will they punch another ticket to Indianapolis or will this team falter down the stretch? Can Ohio State make a run at the CFB Playoffs?

C4B: With MSU shattering the Ohio State mystique of the past two seasons, I expect them to regress slightly. Not a whole lot, maybe only 11-1 or 10-2 in the regular season, but I don't think they'll go undefeated again. Will that get them to Indy anyway? Maybe; it depends a lot on who else in the division has a good year. Even if someone beats OSU, that team may not win the division by default. What that means as far the the playoff, I don't know yet. I don't think anyone truly has a grasp on this new system, no matter what they say, and we won't until we've had one.

Mike Jones: I guess I'm tired of just assuming Ohio State will win the Big Ten only to have them crash and burn on the final lap. That was the story over the entire summer and fall of 2013: Well, Ohio State is going to win because they've got the best team. Eh. Well. How'd that turn out? I'll just assume the Buckeyes are going 11-1 or 10-2, with at least a loss to Michigan State but still make the Big Ten Championship game. I don't have much faith that they'll win the Championship game, thus I don't think they'll be making the playoff.

Green Akers:Well, if #hottaeknation is to be believed, OSU has already won the East division because...reasons. Never mind losing Shazier, Hyde, Roby, and 4/5 of the OL. That's the beauty of being a blue blood, though- people will assume you're good whether you deserve the label or not. Obviously OSU wasn't as bad as their last two games indicated, but there were a fair bunch of cupcakes in that 24-game streak, too.

I'm sure OSU will be there at the end of the season. But I don't see them as head and shoulders above the rest of the conference. And I have no idea how this playoff process is going to work, but a B1G team probably has to be undefeated or have only one loss to go, and I don't think the Buckeyes will do either.

Brian Gillis: I know nobody wants to hear this, but I think the real question is, did Ohio State run up 24-straight on the strength of playing against a soft Big Ten or did the Buckeyes just come up short against two very good teams to end the season? There's no shame losing to Michigan State on a neutral field, but the Clemson loss is harder to rationalize. Having said that, Ohio State will be fine. In fact, the Buckeyes will likely better than last year's squad. But will that translate to another 12-0 start?

DJ Carver: I think with Michigan State in the East, OSU has a harder time getting to Indianapolis than in previous years. The Buckeyes definitely have the talent to do it, but if the Spartans churn out another defense that resembles last years team they're going to have a hard time getting back. If they get past MSU, the playoffs are a definite possibility for the Buckeyes.

Jesse: I think Ohio State has the talent and resources to compete for the new College Football playoffs for the foreseeable future. I also think that they have some glaring weaknesses that need to be addressed for that to happen. It's funny. We all knew that OSU wasn't perfect, but when they were in MURDERDEATHKILL mode last year, I think we had pretty high aspirations for them on the national stage. Then Clemson happened. I'm not even sure where I'm going with that, but I think it just shows that even great teams can get railroaded under the right circumstances. Also, Sammy Watkins now plays for the Buffalo Bills and does stuff like this:

So let's forgive OSU a little bit. But let's also not let them forget it happened. Honestly, let's just all agree that we can give OSU crap, but other conferences can't because reasons. 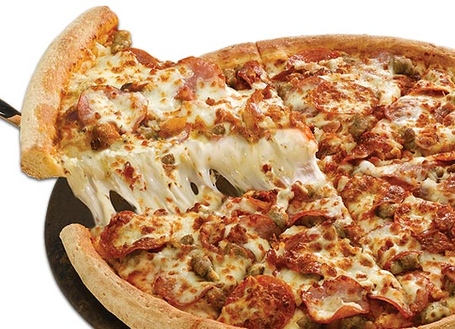 Salad Pizza - The Meats: In theory, this is the part of the meal where we get winners like cottage cheese jello salad, but I figure this is Urban Meyer Sad Pizza day AND WE NEED MOAR SAD PIZZA. Here's how Papa John's describes this pizza, "Created for the meat lover in you, The Meats Pizza is piled high with your favorites--pepperoni, sausage, beef, hickory-smoked bacon and ham. It's bursting with hearty flavor!" This can be loosely translated into, "LOTS O MEAT TO CLOG YOUR ARTERIES!" I'm not even saying that's a bad thing, but come on, at some point we're piling on. So now that we've talked about dying from protein overload, let's talk a little bit about the Heisman candidacy of Braxton Miller...

Braxton Miller is getting a lot of hype early on with B1G OPOY and Heisman hopeful some of the many accolades being thrown around. He's obviously supremely talented, and he can be a gamechanger. What do you see as his ceiling this season? Can Braxton Miller travel to NYC this year? What type of stats would you expect for that to happen?

C4B: Brax's ceiling is absolutely Heisman contender. Heisman winner may be slightly beyond him, but if he has a great season, he'll get an invite to New York. It would take an injury-free season where Ohio State wins the B1G and goes to the playoff, and Brax would have to do well (read: 300+ yards of offense created) in at least 10 or 11 regular season games to make that happen.

Mike Jones: I think the season will be a success for XBrax if he can: 1) Stay healthy; 2) Throw for more than 20 touchdowns; and 3) Rush for more than 10. If he can combine for more than 30 touchdowns and Ohio State has a very good season, he'll get an invite to New York...where he'll promptly lose to whoever Alabama's running back is.

Green Akers: His ceiling could conceivably be Troy Smith-like, if his passing ability continues to mature. I'm not too bullish on his Heisman chances, though, as he'll need to carry the offense to a much larger degree, behind a less experienced line, and he has yet to stay healthy through a whole season.

Brian Gillis: Miller is a game changer, to be sure. Already close to unstoppable on the ground, Miller added some extra weight over the offseason in hopes of increasing his durability. So don't look for him to be any easier to bring down this year. But to take the next step and be a truly great quarterback, Miller needs to improve his accuracy. He hasn't shown a lot of improvement year over year to date, but will he make a big jump his senior year? If he does, he may as well start making those reservations to New York.

DJ Carver: Braxton Miller's ceiling is the Heisman this year, which would continue what seems to be a line of Heisman winners that will end up blowing it in the NFL. Barring injury, i think Miller definitely makes that trip to NYC, using the threat of his legs to keep defenses honest and opening up the passing game at the same time.

Jesse: I'm high on Braxton because I think he has the talent, the school name, and the potential for a great year. Will he go to New York? I think if OSU is 10-2 or better in the regular season, that's probably a yes. He will have to shoulder a pretty big load of the offensive output this year, but he's primed to do so. That should only pad his stats more. And come on, you all know the Heisman protocol. Give it to the best QB based solely on box score checking, WWL hype, and highlight GIFs. Braxton should have a little of all of those.

Tomorrow, we'll tackle Part II of the OSU potluck by talking a little bit about Urban Meyer himself, coaching trades, mascot cage fights, and desserts. It should be a pretty fun day.