So here we are in Part II of the Ohio State Potluck. Yesterday we went over Sad Pizza, chatted about Braxton Miller, and touched a little bit on expectations for the Buckeyes. Today we go in a different direction with some help from Yelp. Since I am obviously not from Ohio, and I actually have never even been to Ohio, I'm relying on this thing I found on the interweb called Google. I look forward to being told I should go find the real food in Columbus. You are all probably not wrong.

Main Dish: Hamburgers because Wikipedia told me both Wendy's and White Castle are based in Columbus. While I'm not going to sit here and tell you that either beat a really great burger from your favorite local joint, I'm also not going to say I'd turn down a burger from either. Oh, and Frostys people. FROSTYS! Let's just go ahead and talk about Urban now... [takes a break to find a Frosty]

Urban Meyer seems to get a lot of flack for being himself. Sure, he left Florida in a less than desirable position. Oh, and sure, he made Biels cry. However, you can also argue that he's doing a pretty great job on the recruiting trail, he is 24-2, and he gives back to the internet by allowing himself to sadly eat pizza on a golf cart. I mean, the guy is versatile if anything. All that said, how do you rate the job he's done at Ohio State so far. Would you trade your coach for Urban? Moreover, what schools do you think wouldn't trade for Urban?

C4B: Urban's done great things at OSU. You don't win 24 games in a row by sheer luck. Would I want him to coach at Indiana some day? Absolutely. Would I trade him for Kevin Wilson right now? Honestly, no. As great as Urban is, I don't think IU's at a place where we would benefit from having him as a coach right now. And if Urban didn't bring success to IU quickly enough, I'm not sure how long he would stick around. I doubt many other schools would say no to him (nor would our administration if Urban showed interest, I bet), but just because he's a great coach doesn't mean he's the perfect fit for every program.

Mike Jones: It's only been a couple of years and things were going so well but how last year ended...meh. I'd give him an 8/10. Let me put it this way: if it were 2008 I would take Urban Meyer in a heartbeat. But then I saw what happened in 2010 and the end of last season. I want to see the Rose Bowls or CFB Playoff appearances to start piling up before I crown him. So if you if you want to crown him, crown him. I doubt Penn State would trade for him, cause they're weird people.

Green Akers: I wouldn't personally trade him for Dantonio, but that's only because Dantonio is the ideal coach for MSU. Were Urbz our coach, I'd be constantly worried about him looking at something bigger and better. Dantonio won't do that. Pretty sure I'd feel differently if Beckmann or Edsall were patrolling my sideline, though.

Brian Gillis: The best way to describe Meyer? Gator fans loved him when he was in Gainesville but have nothing good to say about him now. Buckeye fans hated him when he was at Florida but worship him now. I don't think you'll find many fans who would trade for him ... at least not many who will admit to it.

DJ Carver: The only answer is i would trade Edsall for Urban in a heartbeat, and dream of him teaming with Mike Locksley to make the best recruiting tandem ever.

Jesse Collins: I think you would have to rate the Ohio State experiment with Urban as a success so far. 24-2 is ridiculous, and while those two losses sting because of the weight of the situation, I think just being in a BCS level bowl in Year Two (and would have in Year One) speaks volumes. He keeps replacing the outgoing talent with even more talent as well. Sure, he's not perfect - his ego seems to get the better of him at times - but I think you would be silly not to trade for him. No offense to Pelini, but I'll take the guy with rings. 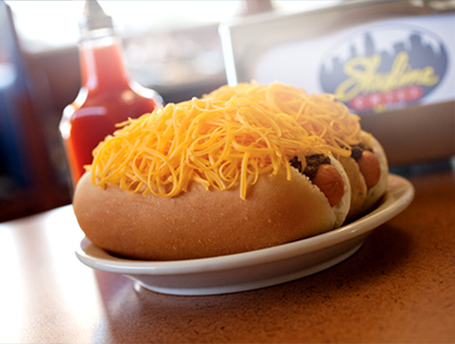 Moar Main Dish: The Cheese Coney at Skyline - So I might not eat chili on top of spaghetti because that's weird, but a Cheese Coney seems to be a better dish than just the regular Coney Dog that Michigan got to claim. I mean, look at that mound of cheese. I'd totally eat that. And yes, I've kind of - definitely - dropped the ball on knowing what the best eats in Columbus/Ohio are, but I'd eat from all of these establishments. Speaking of absurd things (I promise I will tie in foods to questions next year), let's focus on something we haven't talked enough about this year: Mascots!

Arguably the greatest image in B1G mascot history is the Ohio Bobcat suckerpunching Brutus. It was a pretty low blow, but it was hilarious. We've gone almost the whole season without discussing mascots in depth. Tell me a little bit about your mascot and where you rank yours compared to Brutus. Would you be excited if your mascot jumped Brutus? How about if Brutus beat up your mascot? Hell, what B1G mascot wins in a cagematch? There are lots of angles to take on this question.

C4B: Mascots? ......this is like alcohol discussions all over again.

Mike Jones: Herky the Hawk has an oddly large head. Probably because he was originally drawn as a caricature and the University of Iowa hasn't really taken the time to make his head any smaller over the years. I'd say he's rather generic and Iowa should probably take some time to update him. If I had to rate him I'd rate him in the middle of the pack. However...when he goes Captain America Herky HE'S THE GREATEST MASCOT OF ALL TIME. Captain America Herky: 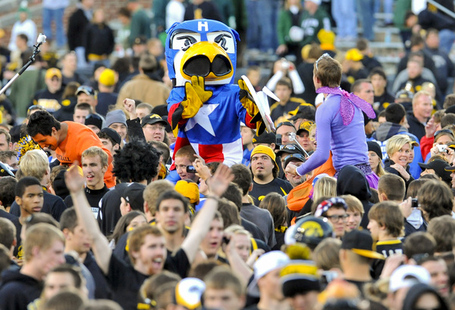 Green Akers: Sparty is the greatest mascot to ever mascot and there's really not room for debate. Two schools in this conference don't even have mascots. Get your lives together, Michigan and Indiana.

Testudo wins hands down. He will try to do this to your mascot:

And, if all else fails just hide in the shell until you become so tired from trying to beat the shell that he comes out to perform his snapping act on you.

Jesse: Nebraska has two mascots because we tried to pander to the masses by adding an inflatable demon that has stolen the souls of Nebraska sports. 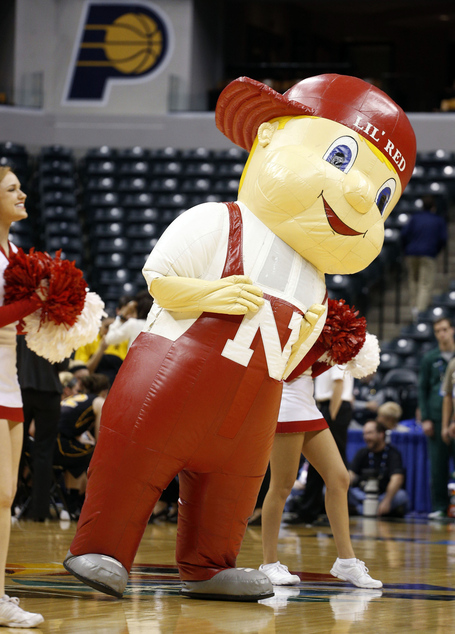 Our other mascot is a guy wearing jeans who kind of runs around and looks weird. He might win in a cage fight because he has a corn shucker and weapons like that don't mess around. Then there's always a chance that he can tag team with Lil Red and summon the Children of the Corn. What I'm trying to say is that our mascots - and mascots in general - are weird. 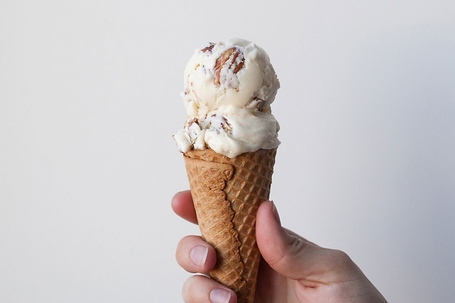 Dessert Bonus Time - Jeni's Spelndid Ice Creams: I might literally order this stuff. It looks amazing, and while I have no frame of reference other than internet reviewers, the Whiskey & Pecans ice cream sounds legit. Here's the description:

Count me in. So now that we've got you thinking about desserts, let's get onto a question about... DESSERTS! I ACTUALLY TIED A QUESTION TO THE FOOD! WE DID IT GUYS! WE FINALLY MADE IT HAPPEN!

We've done a lot of beer and liquor convos on OTE this season, so let's talk desserts. I know that one of the ways people know 'Buckeyes' is by this dessert that's called Buckeyes. It's chocolate and Peanut Butter and sugar and such, and it apparently tastes pretty good. Anyhow, give me some of your state/school/city's finest desserts. They can be homemade or store bought, but you better provide links.

C4B: Sugar Cream Pie, hands down. It's the official state pie, after all. 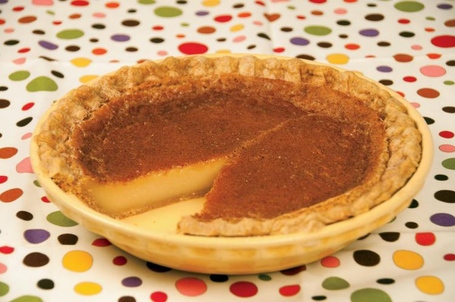 Mike Jones: It's Iowa so I'm just going to pick something gross and fry it. How about a deep fried Twinkie? 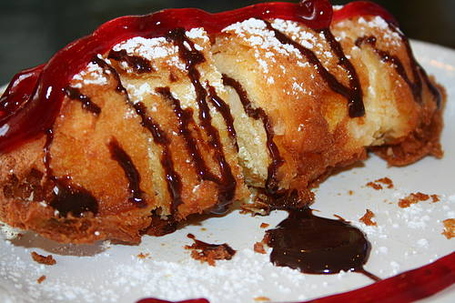 Green Akers: Mackinac. Island. Fuuuuuuudge, y'all. Get in my mouth.

DJ Carver: Screw dessert, we already discussed smith island cake in all its glory (cake wins). Today, I give you the old bay doughnut fried chicken sandwich from Astros in DC. You can read the review and view a picture here (linky). I was skeptical, and as i discussed with Jesse last week I had to go get one. I did, and I was not disappointed. I was really skeptical about the doughnut as bread, but it worked out great and the old bay complemented the chicken sandwich perfectly. Given that Astros is selling out before 12:15 or so each day, i think this might stay on the menu.

Jesse: I've mentioned eCreamery in Omaha before, and many will tell you to go snag some ice cream from Ted & Wally's. I won't disagree with those choices, or any of the many bakeries in Omaha and Lincoln that sell delicious things. But I'm going to go in a different direction and choose Bakers chocolates out of Greenwood, NE. They are addictive little chocolates that are wrapped in foil wrappers, and while they may seem a little ridiculous, they're kind of amazing. The Dark Chocolate Raspberry is the best.