Just in from ESPN: The Eye of Sauron took two minutes from salivating over its SEC cash cow to discuss the B1G, and the results are surprising. 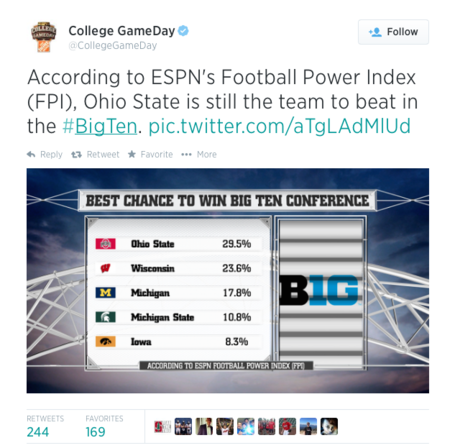 Yesterday, the folks at College Gameday dropped a Tweet that should be of considerable interest to the B1G lovers among us (and that's all of us, right?). Despite the surprising and seemingly crushing loss of Braxton Miller, the sports media giant's power index still puts the Buckeyes as the clear favorite to win the B1G. Ahem...what?

Add to that, they put Michigan as a narrow favorite over Michigan State.

According to ESPN, the power index functions thusly:

The Football Power Index (FPI) is a measure of team strength that is meant to be the best predictor of a team's performance going forward for the rest of the season. FPI represents how many points above or below average a team is. Projected results are based on 10,000 simulations of the rest of the season using FPI, results to date, and the remaining schedule. Ratings and projections update daily.

I'll be the first to tell you I don't know much about statistics and ranking methodologies. Thanks to the malevolent dean, I was forced to take Probability & Statistics in college, but that limited knowledge and the proprietary nature of ESPN's system leaves me unqualified to comment on how this jive works. That being said, I am a student of the science behind the game, and thus can do a bit of internet sleuthing for the good of the order.

ESPN describes its crack at the preseason ranking schtick in rather optimistic terms:

Preseason college football ratings have historically been far less scientific than even the polls. But that doesn’t have to be the case. This spring, ESPN Stats & Information created an automated set of preseason ratings for all FBS teams heading into the 2014 season, designed to predict how strong each team (including its offense, defense and special teams) will be this coming season. This is essentially a preseason version of the Football Power Index (FPI) used last year.

Before any games are even played, historical data on expected points added (EPA) tells us a lot about how teams perform the next year. For example, Florida State’s past few years of performance, number of returnees (players and head coach) and recruiting suggest that its offense in the 2014 season is going to be a stellar 16.9 PPG better than average. Similarly, its defense will also likely be outstanding at +13.6 PPG, with a solid +1.7 PPG on special teams. With an overall preseason FPI of +32.2 -- representing how much better the Seminoles would be against an average FBS opponent (someone like Illinois) on a neutral field -- they project to be the best team in 2014, just as most subjective opinions have them.

I'll grant you that calling the Illini an average opponent is probably generous, but the rest seems interesting, if not lacking in background. FSU will be almost 17 points better than average? What's the average?  The rest of the description lauds teams with returning talent and coaches for increased efficiency. Thus we can surmise that FSU is predicted to put up better ppg numbers than their exceptional 52 ppg last year. Even if we assume that the model predicts only a one ppg improvement on average from Jameis Winston and the Seminoles, that puts the FBS average at a whopping 36 ppg by the ESPN system. Five touchdowns is the average for the FBS now (meaning that half of the teams will do better than 36 ppg)? Either defense is suddenly dead, or something is amiss.

By contrast, here are the FBS ppg averages for the past five seasons:

Something smells off about that to me, just as it seems odd that OSU would still be the B1G favorite by such a wide margin, or frankly even at all. More perplexing is the prediction of Michigan over MSU.

As your resident OSU pundit and frothing-at-the-mouth Buckeye fan these predictions speak to my heart, but certainly not to my head. Unless I've drastically missed something (like, say, ESPN believing FSU's offensive output will drop to 45 ppg), the predictions of this model seem quite flawed to me. I certainly invite the statistical experts to weigh in. Regardless, I don't see the B!G trophy in Columbus this year without a healthy Braxton Miller.