The Beginning Of Fandom

Communities and football and where it all begins

Share All sharing options for: The Beginning Of Fandom

You're all excited. I'm excited. The spectacle of football is one to behold. Maybe you love it because of your alma mater or pro team. Maybe you love the hype of it all. Maybe you're a former player who can still feel each hit you took back in the day, and remember your rushing numbers from every game ever played. Maybe you love the minutiae of statistics and starters and defensive formations. Maybe you've got a kid playing for the first time this year.

It doesn't matter where your love affair with the game began or is at this moment (i.e. you just had your first kid and really don't have time to work and dote and watch football). It just matters that you're part of this dynamic piece of American culture. You love football...and that's enough. 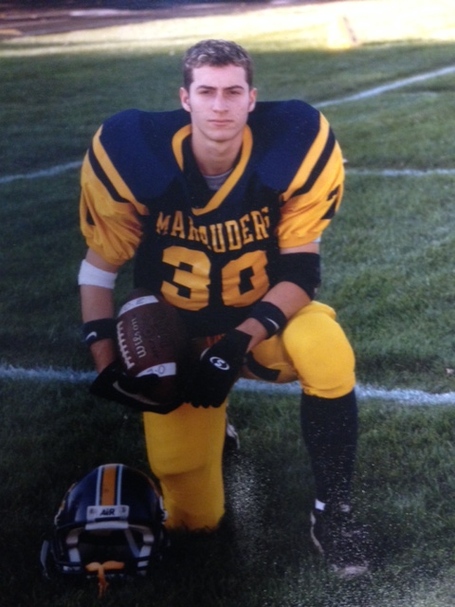 When I take a look at my own fandom, I see a young Graham, a 15 year old sophomore at Ovid-Elsie High School, starting two-a-days, having never played football before. Sweating through every cotton shirt (we really could have used Under Armour), not understanding how to hit ("keep your head down and drive through Graham! Watch the hips!"), picking up the nickname "marshmallow" from my Coach...Then the camaraderie, the friendships, the wide-receiver/quarterback connection I picked up, laying out an opposing punt returner for the first time...the film study, not as intense as every Hollywood montage depicts, frequently interrupted by slow motion viewings of someone making a hilarious or boneheaded play.

Looking up in the stands before each game to see my mother and waiving to her. Game 1 of the season, she was white-knuckled and praying I didn't die...by mid-season, she was yelling Get'em Graham!

Scoring my first touchdown, scoring another touchdown, picking up the nickname "Hands", losing close games but knowing our JV team was growing and improving...Learning the importance of following your blockers...Singing our fight song before each game, which if pressed, I think I can recite to the tune of the Northwestern fight song -

Go you Marauders, onto victory.

We will back you all the way, we'll fight for you O-E (rah rah rah)

We will be loyal, never let you down!

‘Cause we got the spirit, we're gonna win,

And fight right onto victory...FIGHT

There are few things more Midwestern than talking to friends and family in the stadium parking lot after a game, surrounded by cornfields, still wearing pads and eye black, the night air cool and smelling of manure...

And then came varsity, pushing myself past the point of exhaustion in two-a-days, getting hit by 250lb defenders, watching the starting middle linebacker plant me after hurdling the line of scrimmage ("that's why you never leave your feet"), learning to think about the team the team the team...Losing games, losing more games, feeling dispirited.

I didn't play football my senior year. Long story short - my quarterback transferred, I started hitting the weight room and concentrating on tennis. One of the bigger mistakes in my life and because of my impetuousness, I missed an entire year of football. What I wouldn't give to be standing on that field this Friday, doing jumping jacks, my heart beating out of my chest, seeing the community lined up in the stands, waiving to ma, jumping in the huddle, arms around my brothers, ready to sprint and hit and bring victory to my hometown.

I always tell my fiancé that football taught me to be a man. She looks at me like I'm crazy. But for the first time in my life, I was part of a community, a rather large outfit of colleagues, and it wasn't about MY ego and MY selfish desires, it was about the team. Building up others. Putting in tons of physical effort so a team could succeed and accomplish goals.

That's where my fandom began, my love of all things football, an acknowledgement that football brings communities together. Where did yours begin?