Let's just say that things haven't been going so well for the B1G this year.

Share All sharing options for: The 2014 B1G Power Poll Week 3: We're All Just One Big Fire

I got an email from Andrew on Sunday saying it was probably about time we broke out an old standard in OTE Power Poll canon - the Fire Poll. After all, it's not like we're completely new to this whole, "let's lose a lot of high profile games in successive weekends so that talking heads can talk about our decline," game. As I am always a man of the people - or at least I like doing easy Power Polls every once in a while, I decided to comply.

This week we celebrate fires because that's pretty much what the Big Ten was last week. Sure, there are still two undefeated teams, and hey, Michigan State and Wisconsin's losses don't look that bad. Oh, and it's not like Virginia Tech went out and got whacked by Eastern Carolina or... Wait. But never fear, the Big Ten has a stellar record against Power 5 teams... Dammit. Fine, we're celebrating fires because this whole conference is one big fire. Follow along as we look at firestarters, fires in general, and fire sustainers. It's just one big flipping fire. In general, you're our favorite fire. A mainstay of camping trips, a bastion of warmth for the lonesome traveler West, and still a fire. You had a week to rest that All-Galaxy hardwood planks, and it looks like pretty clear sailing for a while, but we're not feeling good about your prospects to do much more than be a nice congregation point for all us other fires. I guess the upside is that we'll all be able to eat smores and talk about the good old days when we weren't complete wrecks.

You know that term, "playing with fire,"? Yeah, you're doing it. Sure, it was really cool when you said, "Guys, we're going to go back to when cannons were a thing and use 25 lbs of black powder to make it happen!" And honestly, I think we were all sort of happy you were going to do that too. Then it was just a loud noise and a little fire and we're all disappointed in how you did last weekend. Cannons were cool during the Civil War, but we're a little past that. You pack a punch, but if it takes you as long to get to the explosion part - like last weekend - you won't be hanging out up top that long.

You're a wonderful vat of used cooking grease, a leftover from that last batch of fried curds and a holdover for tomorrow's fried curds. As a general rule of thumb, that's a good thing and we're glad we know what we're going to get from you. However, you're really just a step away from a disaster, and if we're being brutally honest, we need to talk to you about the coach chef. We think he could be one of the best, but he's not been perfect at keeping things clean and if you're not careful the whole kitchen will be on fire, and it will probably be because you're QB threw another errant pass and it knocked the grease over into the oven and OMG EVERYTHING IS BURNING UP!!! This is a bit of hyperbole, but know it can happen if you don't figure out how to pass the ball. Sometimes a forest just needs a gigantic fire to burn everything down before it can start growing again. Two weeks ago, you were a gigantic fire. This week? Less so. The nice thing is that you have tons of beautiful 4* and 5* recruits strong pine trees to replace anything that might fall down. The bad thing is that you've been shedding needles on the forest floor for a while and we're not sure if what we saw earlier in the year was who you really are. After that dastardly arsonist Virginia Tech got burned to a crisp last weekend, we're not sure what to think.

You know how farmers build their houses away from fields and prairie lands? Oh, and then they randomly plant normal yard grass around their houses even though they don't have a homeowners association to tell the they have to do that? Then you think, "Weird, why would someone do that because that seem like a dumb idea? I really don't think I'd do that." Of course, the reason they do that is so that when the prairie grass inevitably starts on fire, it doesn't burn their house down because that stuff burns really hot and fast. What I'm trying to say here is that we're not sure if Nebraska has that lawn planted or not, and things can get hot in a hurry. Better hope they're prepared this weekend.

Sometimes, you're a very useful fire and we reap the benefits from your economic addition to the group. Oh, and you even resemble something specific - like a football team - from time to time. Other times, you are an oil derrick on fire because your Quarterback doesn't know where the line of scrimmage is and forgets whether he's supposed to throw to the team in silver helmets with the R on it or the Penn State players with the white helmets and blue stripes. This was a very specific way of saying that Gary Nova was terrible on Saturday. Hey, you can be the most entertaining of all of us. Big flashy colors, explosions after every single thing that happens, excitement, BRANDING! So what if it's mostly an illusion and not really all that great, oh and look out for the handlers. If you have an amateur at the helm, you could really end up with some problems. Things looked okay this week, but we wouldn't be surprised to see you as a gigantic mass of Looney Tunes style chaos in a second. No worries, you're the big show, and I'm pretty sure the Director is happy you all are coming to the performance.

Sure, it's cool that you have all those pretty colors, and yes, the ones you used this weekend were pretty neat with all the cool words and fancy looking patterns. The thing is, when it says that paint is flammable, they're not kidding. We were hoping for big things for you this week, and you almost pulled it off. The paint was drying on a win, and then something sparked up and then there were colorful flames everywhere and... Okay, it wasn't good. You can obviously put points on the board guys, but you're going to have to learn to keep them off as well. You are a perfectly content little fire happening at its own pace, just wasting away and slowly burning out until this incredibly overpriced three wick candle finishes its run. The thing is, that three wick candle will never go away because it cost a lot of money and you're going to make sure you get every last cent out of it. Little did you know that the Pumpkin Spice candle would go out of style and even when you tried to add another candle to the mix, let's say the Texas Pine candle, it just turned into an even worse smelling and more obnoxious little fire. But no worries, you're just doing your thing, staying the course, and punting from the 34.

Sure, maybe the video is a bit overboard. After all, who really thought last weekend wouldn't be just a little bit much for the outlet. But man, it felt like the whole substation started on fire, and before you knew it, we were all watching in horror as you struggled to figure out if you should put the fire out or just let it burn all the way to the ground. You have a good thing going, but once you start on fire, the only thing you can do is hope that it dies down or you'll get electrocuted, which sucks because right now it feels like everything is on fire. Oh yeah, and you suck at passing the football. Sorry, that doesn't necessarily fit my description, but it had to be said.

Look at you setting that firecracker in a cow pie. I mean, that firecracker seemed like a good idea at first and hey, what's the worst thing that could happen? It's not like the Cow Pie is flammable or anything, but that's not the point. The Firecracker is fun and would win you lots of games, and don't worry about the fact that in this analogy your defense is the Cow Pie. What happens when you mix the two? You get cow feces all over everything. Losing to Ball State on Saturday was basically like getting cow feces everywhere.

Just like our friendly Springfield Tire Fire, you're sort of an icon at this point. We expect you to be our comfortable little awful fire, just welcoming us to these Power Polls every week. We were worried there for a moment that maybe, just maybe, you had turned the corner and that giant pile of tires would die down. Then you went to Washington and the flames got bigger than ever, and we're just all very disappointed. Good luck getting those flames to die out anytime soon. Oh, and even if you do, good luck getting that stench to go away. It's just been bad for you for a long time.

Of course you would be the most caustic of all of these fires. Leave it to the smart guys to accidentally mix the wrong chemicals when they were trying to find the perfect combination that would give them #GOCATS power. The problem is that everything you were using was radioactive, and the formulas you had were supposed to use better, more impactful chemicals. Instead you had to settle for second-grade versions and now we have a meltdown of epic proportions. What's most annoying is that I still have no doubt you'll figure out some special concoction to knock somebody better than you off this year because it's kind of your thing. 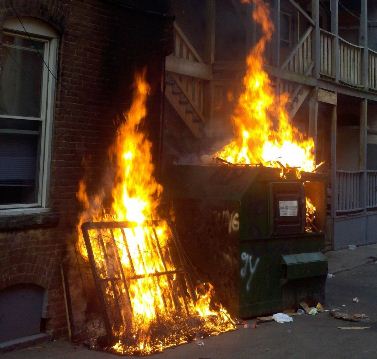 In a conference full of fires, you're probably the one that happens most often and gives off the worst stench. We would give you credit for a good loss, but that implies something good in losing by multiple scores and I just dont' know how to feel about that. Yes, maybe last weekend was trash day and you were empty and therefore a little less Dumpster Fire and just plain dumpster, but that's where trash goes and we're not sure that's a good thing and you'll probably be another major fire in no time.