Simple Minds Contributing Dumbly...or something like that. It's your weekly tire fire.

1. It has been said by every fanbase. So once again, in unison: JESUS, THESE REFS.

2. J.T. Barrett stepped up into the pocket and threw a crisp pass more times in the first half than Cardale Jones has all year.

3. Illinois' defense is very talented up front, and exposed a lot of weakness at the right tackle position for OSU.

4. Michigan State without Connor Cook still throws TD passes. That is scary for the rest of us.

5. Maryland is seriously courting Lane Kiffin? Does he know how to teach a wrestler how to throw a ball? Is he still an asshole? Sources say yes/no/yes.

6. Justin Jackson has rushed for nearly 1000 yards this season, but only one touchdown prior to today's game.

7. Purdue has not beaten Northwestern since 2010.

9. Congratulations to Jake Rudock, who looked like a great quarterback for the first time in his career.

10. How does Indiana keep losing these games? Oh, right, the defense.

11. Was Jerry Kill opposed to touchdowns? Where did this Minnesota offense come from?

13. Iowa's S&C includes a lot of work on grip strength.

14. The Hawkeyes are 10-0 for the first time in history. Kirk Ferentz is dead. Long live Kirk Ferentz.

Though the Buckeyes blew out the line on this one, few fans can be happy with one TD per quarter out of the supposed championship contender. Ohio State was technically robbed of an early TD thanks to trademark bad officiating (I'm over it, really), but the fact remains that too many drives fizzled and or flopped against a good-but-not-great Illinois defense. Barrett showed why he's the clear favorite over Cardale Jones, stepping into a pocket that collapsed far too often to make an accurate downfield throw. His best toss of the day was easily his in-stride arc to a streaking Michael Thomas for an early touchdown. As is so often the case, Ezekiel Elliot was the draft horse of the offense. To a booming chorus of "Zeeeeeke" from traveling OSU fans, he racked up 181 yards and 2 TD. Illinois' own outstanding back Justin Ferguson did his best to keep pace, but a smothering OSU defense held him to 47 yards on 12 carries. Wes Lunt's numbers weren't good at 23/47, but he got no help from receivers who dropped well-thrown balls on several occasions.

GF3's HOTTAKE: Anyone interested in a Tim Beck? Anyone? Priced to move. Zeke is as good as ever, but it's clear with this line that the holes open much better when they fire off the ball and engage instead of making a C-step move. Power football and Zeke go well together, as the second half showed.

J.T. Barrett is so, so, so much better than Cardale. They're not even on the same level. I cannot fathom why Meyer fucked around with having Cardale running the offense for so long, when it was clear to pretty much every fan and person with eyes that he doesn't have the stuff to make it as a real D1 QB. His decision-making is a step behind the play. Barrett's is a step ahead.

Thump's other HOTTAKE: That defensive line played their asses off. The special teams were awful, and the offense was putrid. We were in field goal range 5 times and came away with 3 points. What is the FBS record for most incompletions in a season anyway? Does Wes have a shot to break it? The receivers have about 2 seconds to get open before he decides the play is over and sails it out of bounds or chucks it in the dirt. I've never seen a quarterback give up on so many plays. Cubit and Lunt are really limiting us. I'm ready to move on from the Clunt era.

The Spartans seems to lose even when they win lately. Hosting Maryland, Dantonio's team saw their captain and star QB felled by injury. He wasn't having a good day even before landing oddly on his shoulder, completing only 6/20 in the first half. Backup Tyler O'Connor did yeoman's service in Cook's absence, going 6/11 for 44 yards, a TD and a pick. On the Maryland side of the ball, little went right. Perry "The Wrestler" Hills threw for 140 yards on 14 completions, but a backbreaking pick-six to Riley Bullough was the highlight of his afternoon. Even without Connor Cook, MSU had more than enough in the tank to put away a Maryland squad that seems as lost as ever. The big question for MSU will be Cook's health in the coming week.

AK's HOTTAKE: MSU remains a flawed team, but this weekend they reminded us that if your strengths don't line up with State's weaknesses, you're still probably going to have a bad time. A bad secondary doesn't matter if your opponent can't throw it, and this defense will still smother a ground-based offense. Cook's injury is nerve-wracking of course, but initial reports are he'll be ok. There's enough here to see a shot at the upset in Columbus next week if you squint at it right, but I'm still not holding my breath.

GF3's bonus HOTTAKE: Teams with this many injuries need to investigate the possibility of a Mayan curse.

MSU next up: at OSU | Maryland next up: Indiana

Purdue is a movable harbor, but Northwestern survives to advance to 8-2. There wasn't much to cheer about on either side of the ball. Northwestern started out well. The Wildcats drove the field to score on the opening possession, and then promptly went to sleep. By the time the second  half rolled around, Pat Fitzgerald looked to backup QB Zack Oliver to jumpstart the offense. Like Clayton Thorson, he, too, found little headway against the Purdue defense. Thorson returned to put the PurpaCats up by score on a drive capped by Jackson's second TD of the season with five minutes left. Warren Long looked strong for Northwestern with two running TDs, while Purdue survived all day on the arm of David Blough and his 287 yards passing. Northwestern puts another win in the book, but is nowhere near the driver's seat in the West.

LPW's HOTTAKE: Northwestern's defense bailed out their offense again. I think  the team might've been looking ahead to Wisconsin. Purdue came spoiling for a fight. I'll take 8-2.

GF3's bonus HOTTAKE: Purdue actually has a lot of playmakers. They're not world-beaters but they certainly have the ability to put up points. Does Darrell Hazell just flip a coin to decide whether or not to call successful plays or not? The feast-or-famine nature of their offense is sort of baffling, even for Purdue.

Northwestern next up: Wisconsin | Purdue next up: Iowa

The L in UNL might as well stand for Lazarus. The formerly DOA Huskers are now one win from a bowl bid. Nebraska's first trip to Piscataway got off with a bang, as Tight end Cethan Carter scored a touchdown on his first career run to put the first points on the board. A Jordan Westerkamp reception and another by Alonzo Moore put the Huskers up by three scores before Rutgers found the endzone with a minute left in the half. The Knights briefly made a game of it with a follow-up touchdown midway through the third to narrow Nebraska's lead to one score, but that Janareon Grant endzone grab would be their last. Cethan Carter snagged Tommy Armstrong Jr.'s third touchdown pass of the day and the Huskers added a late field goal to seal their fifth win of the season. Armstrong Jr. was the spark igniting the offense for Nebraska, though his three interceptions kept fans groaning for much of the afternoon. Unfortunately for Rutgers, they couldn't turn Nebraska's blunders into scoring drives, and they fell for a seventh time this season.

Nebraska next up: BYE | Rutgers next up: at Army

For all the chuckling at Nebraska's ability to lose close games, Indiana has been working on a list of knee-slappers as well. Tonight, though, the Hoosiers flirted with landmark success as they took Michigan to two overtimes. Sadly, their dreams landed with the thud of a dropped Sudfeld pass on 4th & goal. Neither team showed anything approaching quality defense in this matchup. The vaunted Michigan tacklers got gashed repeatedly by Jordan Howard in between in the tackles, and Sudfeld picked the secondary apart on out-rights and downfield strikes, totaling 220 yards on 20 completions. Unfortunately for the Hoosier offense, they got no help from their defensive unit. Jake Rudock threw for a career-high 440 yards on a 33/46 campaign, including 6 touchdowns. His 4th & goal throw into traffic sealed the game-winning score for the Wolverines. Michigan's run game was nearly non-existent, with the leading rusher being Rudock on broken-play scrambles. The whole team combined for only 141 rush yards, which seems all the more meager when compared to Jordan Howard's 238. The bruising back pushed the Wolverine defense around at will, but the chips fell on UM's side in the overtime periods.

Candystripes' HOTTAKE: College football is bullshit and should be permanently abolished.

GF3's HOTTAKE: Rudock showed flashes of brilliance against what is, statistically, one of the worst pass defenses in the game. Jim Harbaugh is an impressively huge asshole on the sidelines. Michigan desperately needs to figure out how to run the ball.

Floyd of Rosedale is headed back to Iowa. In spite of Minnesota's recent offensive awakening, the Hawkeyes had too many weapons and too much at stake to let the Gophers keep Floyd. B1G purists and students of the game might be shocked to a 75-point outing between those two titans of stodgy football. Nonetheless, the Hawkeyes' first 10-0 start in school history was earned amidst a flurry of big throws, long runs, and gritty touchdowns. Beathard played like a man possessed, showing almost no sign of a hobble as he broke free on scrambles and rolled out to hit first down passes. Iowa's big signal caller finished 18/26 for 213 yards. Perhaps even more surprising was his foe Mitch Leidner, who completed 19 of his 27 passes for 259 yards. The difference for the Hawkeyes was their run game. Where Minnesota managed only 133 yards rushing, the Hawkeyes got 195 yards out of Leshun Daniels by himself--part of a 272-yard team rushing campaign made possible by a bulldozing offensive line. More than 500 yards of offense paid off in spades for Iowa, though the Gophers made the Hawkeye defense look very mortal. The Gopher defense looked equally mortal, but that's not a surprise at this point in the season.

stewmonkey's HOTTAKE: Oink, oink, motherduckers! Iowa is 10-0 for the first time in school history. Right now I can't even find time to care about Mitch fucking Leidner orchestrating a competent offense against Iowa. Or that autocorrect apparently thinks 'motherduckers' is a word.

insertname's HOTTAKE: They say when you are overmatched you commit penalties. Good to know the o-line for a 10-0 team had to hold all night long against a team missing its two starting d tackles. OSU is looking at another 59-0 win in Indy. I want to be mad at the d for not tackling but lol injuries. Minnesota, the King of getting within a score and not getting the onside kick. This will be a season of what ifs. If this team was healthy, it wins the West. Congrats on another blowout win in Indy OSU. 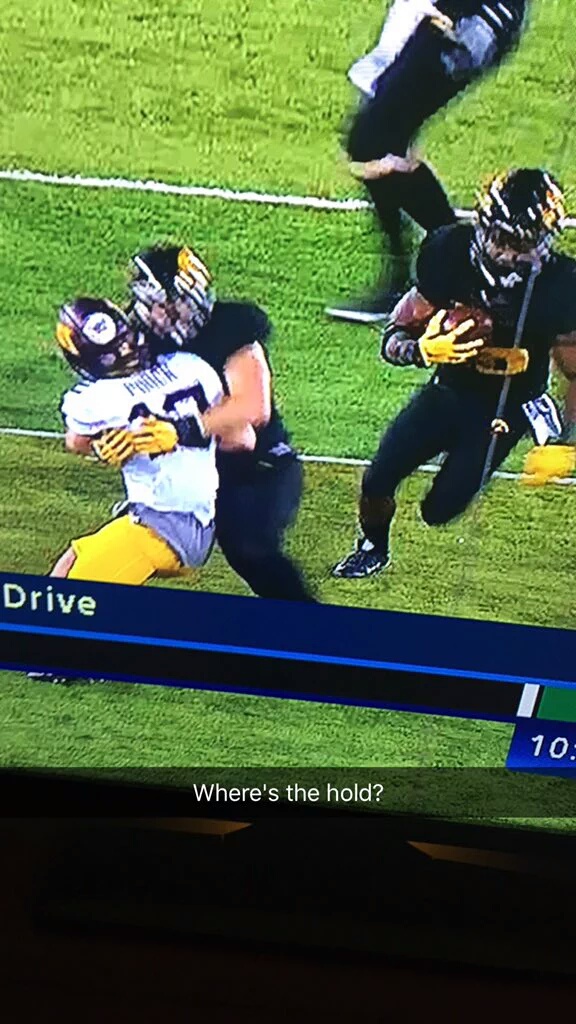 TSpeth's HOTTAKE: I've had to shower multiple times for cheering for Minnesota and I still feel unclean

WhiteSpeedReceiver's HOTTAKE: Oh fuck it all. And I would've gotten here sooner to give my take, but Iowa's line kept holding me.