The off-season is pie season.

Greetings fellow Americans. As we make our way through B1G 2015, your humble "writer" and pie enthusiast will be embarking on an effort to highlight the distinctive tastes our great conference. As the weeks pass, I'll bring you recipes of note for pies and pie-like desserts that highlight the team and its home state.

Before we get to all that, we must talk about the foundation of the feast. So today, we're making pie crust. For the uninitiated, pie crust recipes can be a flashpoint issue. Folks tend to be united in their belief that their own grandmother's crust is the best. This is similar to our belief that we're all above-average drivers. What follows is an explanation of the theory behind pie crust, and hopefully a recipe you find enjoyable useful as basis for our culinary trek across the midwest (and, yes, #&@%ing Maryland and Jersey, too).

Now, let us consider what makes a pie crust...

Flour comes in a few key varieties, and you'd do well to know your way around them. They each have a few specific uses, and generally don't tend to substitute well. First, let's talk about the varieties we won't be using for our crust.

Bread flour: Obviously, this flour is best for bread. That's because it has a higher content of the proteins gliadin and glutenin--around 13%. When the flour is kneaded, these proteins break down and combine with any added water to form gluten. Gluten creates the stretchy, crusty, chewiness we like in breads. It plays really nicely with yeast, trapping the gaseous burps of our microbial friends to make our doughs rise. That's exactly why we won't be using it for this recipe. We want our pie to have a flaky, pastry-like crust. Bread flour has too much protein, and we'd get a gummy base if we used a high-protein flour.

Cake flour: Another eponymous flour with a very focused use. Cake flour is made from soft wheat, so it has a very low protein content, around 9%. It also contains a bit of cornstarch. The result is a very fine, tender crumb. That's ideal for cakes, which have very tiny air pockets and need to be as soft as possible. It's not good for pies, because our crust needs to have some structure to it. We're going to fill it with heavy fruit and boiling sugars, so cake flour won't cut it.

Self-rising flour: If you're making a biscuit, self-rising flour is the best thing going. With a very low 8% protein content, it'll make you a fluffy, soft biscuit worth getting out of bed for (and the noon kickoff means you need to be up early). Self-rising is so called because it comes pre-mixed with baking powder and a touch of salt. That's great for biscuits, but again not for a pie. We don't want the rising the baking powder produces.

Whole-wheat flour: Easily the healthiest of the flours, whole wheat is made from the entire wheat berry. It creates a dense, wholesome bread. The high protein content (up to 14%) is, again, great for creating gluten, but the high bran content also tends to break up the gluten strands formed by kneading. As a result, whole wheat flour can be trickier to work with than other varieties. It would also make a horrifying pie crust. A new product on the market is called "white whole wheat" flour, which is made from the entire berry of the white wheat plant. Traditional whole wheat flour is made from red wheat. Don't be confused. Both are whole wheat. The color is the only real difference.

So, what kind of flour are we using as the basis for our decadent midwestern masterpiece? You probably guessed it already...

All-purpose flour. All-purpose flour, or "AP" if you're hip to the jive, is the go-to flour for a variety of baking needs. It's the only choice for many recipes, and certainly the best starting point for a quality pie crust. All-purpose flour has a medium protein content at about 10.5%, making it useful for breads, and pastries, and pie crusts. It's the Jalin Marshall of flour--pretty good at damn near everything (though it won't try to fumble away the game at Minnesota).

Fat is delicious. That's why everything without fat tastes a bit crap. In the case of a pie crust, fat is not only the expressway to flavor town, but is crucial in binding the dough and in creating the microscopic strata that will become flaky layers in the oven. The key to achieving that flaky effect is to mix the fat into the flour in a very specific manner--a process called "shortening the dough." Hence, thick fats used for that purpose are often referred to simply as shortening, such as Crisco vegetable shortening.

But first, a look at the fair citizens of the fat universe...

Lard. The name isn't pretty, nor is the source when you really get down to it. Lard is animal fat--pig fat to be exact. Why do we like lard? Well for starters it's mighty tasty as far as fats go. Secondly, it has a very low water content. Thirdly, its fat molecules are very large, meaning it yields a very flaky pastry. Note: the lard sold in stores is not true lard, generally, but a hydrogenated form of lard.

Butter. In the words of noted diabetic and antebellum race relations fan Paula Deen, "it's got buddur in it, y'all." As a fat, butter is pretty good. It's flavorful and rich. The downside of butter is the high water content. Commercial butter can be up to 15% water. That means butter melts at a lower temperature than shortening, which yields baked goods that flatten and spread instead of just rising. For a demonstration, make a cookie recipe with shortening and then again with butter. Shortening cookies are fluffier, butter cookies are flatter and crispier. Both have their place.

Shortening. Vegetable shortening is lard's modern cousin. As mentioned before, it was designed to mimic lard and other natural shortenings. It's made by hydrogenating vegetable oils, which is a process of bombardment with hydrogen atoms until the lipid chains in the oil are blah blah blah. Bottom line, it makes the oil solid at room temperature, and also generally horrible for you.

Oil. Yes, vegetable oils actually can be used in pie crust recipes. Such recipes are actually quite easy. The downside is that oils offer little in terms of structural strength and pliability. You had better roll it out right once, because there are no second chances.

Now that we know who's who in the zoo, we can get down to business. As I pointed out in the flour section, all-purpose flour will be our base. We're going to use two kinds of fat for our crust. This will balance structure, flakiness, and flavor. It'll also make a very forgiving crust

Step 1: Chill Out. Get a nice big bowl, preferably ceramic. Toss your lard and butter (still wrapped) in the bowl. Stick it all in the freezer for about 15 minutes. If you have room, you can toss your sack of flour in there, too. The fat needs to be as cold as possible to stay solid as we shorten the dough. Warm fat is bad news.

Step 2: The Dry Stuff. Place all 3 cups of flour in your chilled bowl. Whisk in 1 teaspoon of salt. Use table salt, not sea salt. The finer the better.

Step 3. Fatty-Fatty-Bo-Batty. Add 3/4 C of lard and 3/4 C of butter to the bowl. We're going to be cutting the fat into the flour, so help yourself out and slice your butter sticks into cubes. Do roughly the same for the lard.

Step 4: Cut It In. This is where pie crust transitions from science to art. The goal is to slice our fat into tiny, uniform chunks, coating each chunk of fat in flour so it stays separate from its little fatty neighbors. When mixed with the remaining ingredients and rolled out, the chunks will create tiny, flattened pockets of fat in the dough. These, in turn, will yield flaky layers.

We can cut the fat into the flour in several ways.

Keep cutting the fat into the flour until your chunks are roughly pea-sized. If you don't know how big that is, I applaud your dedication avoiding the food that your food eats. Don't be afraid to sift through the mix and root out any stubborn chunks that are too big. Uniformity is the name of the game here.

Step 5: Get Wet. In a small bowl, whisk the egg. To the blended egg add the tablespoon of vinegar and 5 tablespoons of ice-cold water.

Step 6: Come Together. Add the wet ingredients to your shortened flour. Get in there with your fingers and mix it all together until it forms a ball. If your dough is just a bit too dry to come together, add one more tablespoon of cold water.

Step 7: Chill Out...Again. Wrap the dough in plastic and chill for at least one hour.

Step 8: Roll Out. Cover a cutting board with wax paper or a silicone baking mat. Flour liberally. That means a lot. The last thing you want is for your fat to get warm and stick to the paper. You're not going to hurt the dough with flour now. Roll your crust to about 1/8" thick. I sometimes go a bit thick on the bottom crust because it prevents blowouts when the filling is really bubbling. And because I like crust.

Step 9: Pan It. I prefer glass pie dishes. Metal and enamel also work well. At any rate, the best way to get your crust into the dish is to invert the dish onto the rolled crust. Then slide your hand under the wax paper, and flip the whole thing. Yes, flour will go everywhere. That's life in the big city.

Step 10: Top It Off. Roll out a top crust. If you're really fancy, you can cut it into a lattice and weave it onto the pie. This is usually more trouble than it's worth, but it does look rather good.

Congratulations! You now know how to make a very good and very versatile pie crust. We'll be talking about a variety of filings from around the B1G in future posts. I'll leave you with the first recipe below. Also, keep a few tips in mind:

And now, presenting the first installment in our B1G Pie series.... 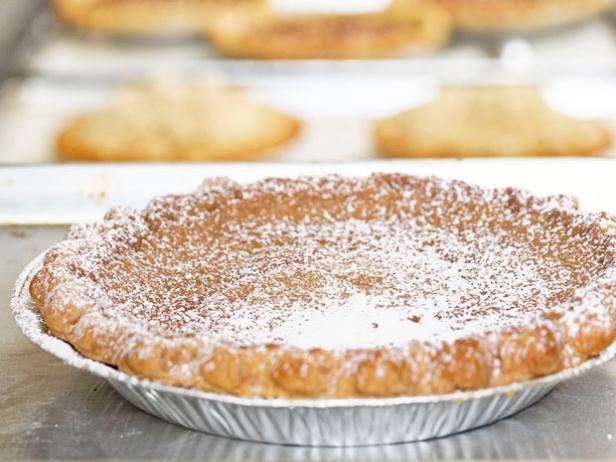 Step the First: Par-bake your bottom crust at 400 degrees for about 15 minutes. The best method is to line the crust in the pan with foil and pour dry beans in to hold it down. After 15 minutes have passed, remove the foil and beans and bake for another 10-12 minutes.

Step the Second: Whisk together both sugars and flour. In a separate bowl, whisk heavy cream and vanilla.

Step the Fourth: Bake at 400 for about 40 minutes, or until pie is set around the edges but wobbly in the middle. Let cool completely. Dust with powdered sugar.

Since you made all that crust, you could make about three Hoosier pies at once. You do the math.

Hoosier pie is based on popular desserts from France and northern Belgium, and has numerous analogs across the Midwest and into Pennsylvania Dutch country (who, incidentally, are not Dutch but Germanic in ancestry). A version even exists in Quebec, where it's typically sweetened with maple syrup. How it came to be so popular in Indiana is a matter of debate. Nonetheless, the world's largest producer of this pie is Wick's Pies in Winchester, IN. The company bakes over 750,000 of the creamy desserts annually.