A B1G Weekend for the Non-Rev's: Baseball and Lacrosse

Share All sharing options for: A B1G Weekend for the Non-Rev's: Baseball and Lacrosse

Sooo, you know those other sports that aren't football, basketball, or hockey that we rarely talk about? You don't? Well, you'd probably think we don't either, but we have a huge weekend coming up for the non-revenue sports with the Men's and Women's Lacrosse Final Four as well as the semi-finals and championship game for the Big Ten Tournament in baseball.  With all of that going on, how could we skip it?

Let's get it started with baseball.  We've finally hit the Big Ten Tournament and are in the final stretch with the double elimination tournament. Here is where we are so far in the bracket: 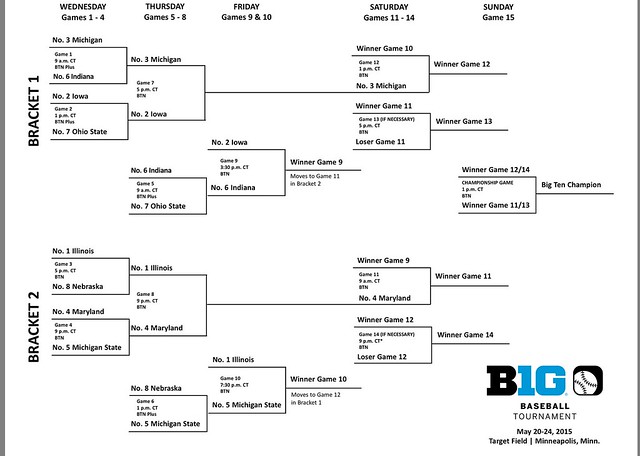 So, where are we? #3 Michigan and #4 Maryland have a bye today since they've moved through the tournament undefeated to date.  Michigan disposed of Indiana in the first round before knocking #2 Iowa down to the losers bracket yesterday 8-5, with a 6-1 lead after 5 innings and never looking back.  This gave them a bye today, which will be very good for their pitching rotation and potentials for the championship game if they were to get there.  Maryland has put themselves in pitching duel situations in both games of the tournament so far, beating both Michigan State and Illinois 2-1 with stellar performances from their starters and snapping the longest win streak in the nation by Illinois, who is ranked 5th nationally.

The path to the championship: Both Michigan and Maryland can make the Championship game if they just win on Saturday.  It's that simple.  If either team loses, they will play again on Saturday evening in what would be the second half of a double header with the same team they lost to earlier in the day (winner of Indiana/Iowa for Maryland and winner of Illinois/MSU for Michigan).  The winner of those games would then move to the Championship game on Sunday.

All games, including today's games, are on the Big Ten Network.

I'll make this entry short and sweet.  The Maryland Women's Lacrosse team is ranked 1st in the country and has been all season.  Outside of Ohio State shocking them 11-10 in the big ten tournament, they were 27-1 in the regular season including the BTT.  This really is Maryland's tournament to lose.  The other final four participants are Duke, UNC and Syracuse.  Maryland is such a force in Women's lacrosse that two of the three other teams are coached by former Maryland players, and the other perennial power in women's lacrosse, Northwestern, is as well.  Maryland defeated it's opponents handily to get here, and I would be shocked if they don't win their second championship in a row.

I said this last weekend, but I will say it again: The ACC in lacrosse this year was the SEC West of football.  Just how is that? How is what is generally considered the best lacrosse conference in the nation, hands down, like the SEC West of football? Well, when they got to the post-season, they just started losing to the B1G of course.  #2 Syracuse? Taken down in the second round by unseeded John's Hopkins 16-15.  #3 North Carolina? Obliterated by #6 Maryland 14-7 in the second round in a game that was at one point 13-2.  #5 Duke? Dispatched in the 1st round by unseeded Ohio State 16-11.  #7 Virginia? They were taken out in the first round by Hopkin's in the most convincing fashion, 19-7.  Yep, the best lacrosse conference in the nation is 0-4 against the Big Ten, who many analyst's continue to say as you watch this weekend is an "up and coming" conference that could be good in a few years.  Sounds familiar, right?

Don't get me wrong, there is still #1 Notre Dame to deal with, and that will be a big task.  Notre Dame has held the #1 spot all season long and they won't give it up easily.  The games this weekend begin tomorrow as #1 Notre Dame takes on #4 Denver at 1:00pm EST on ESPN2, which is followed by a re-match of Maryland and John's Hopkins in the other semi-final about 30 minutes after the first game finishes.  The B1G will represent in the championship game on Monday no matter what, and there is the potential for the ACC to not even get there.

So what are the keys to victory for Hopkins and Maryland? I can lump this together here since it's the same answer: pace.  Maryland has the best defense in the game and they do so by setting their own pace, slowly beating you down on offense and smothering you on defense.  For Hopkins? Well, they are the complete opposite.  Hopkins wants to run, and run all day on you.  Whoever wins this aspect of the game is going to have a great shot at winning the game.  More specifically, if Maryland can limit the JHU possessions by winning at the X (faceoff circle), they can limit the Hopkin's possessions and impose their own pace.    Luckily for Maryland, Charlie Raffa is getting healthy at the right time and he is one of the best faceoff men in the game.  Not so lucky for Maryland, their wing's were not so good at protecting him after winning at the X in the UNC game and Hopkin's will look to exploit that to grab a ground ball and get on offense.

It's a big weekend for the Big Ten, and Maryland has the chance to bring home the bacon in three sports.  For Big Ten fans, you'll want to root for them to win in Women's Lacrosse, and just for whoever wins the Maryland-John's Hopkins game in Men's Lacrosse.  Either way, it's a great weekend of sports watching.  It looks like fantastic weather out this way as well, so get yourself a TV outside by the grill and enjoy!