B1G The Beautiful: The Better Angels of Our Nature

Share All sharing options for: B1G The Beautiful: The Better Angels of Our Nature

Some years ago, a friend who had spent the better part of a year studying abroad mused that "being American means being a part of the never-ending debate over what America means." At the time I gave her notion very little thought. I was doubtless consumed by the inanities of daily life as a college student. Yet, as the Fourth of July approaches in this fifteenth year of the second American century, I find that her observation rings quite true.

We find ourselves now in the midst of great debates about the future of our nation. Whether it be the state of healthcare, the definition of marriage, police violence toward young black men, or the meaning of a Civil war battle standard, the argument over what America means to its people and the world is as heated as ever. Make no mistake, this is still a sports site. We take no overt stance on any of these political issues. It is nigh to impossible to avoid noting their existence, however. Perhaps the hue and cry over Confederate symbols is an altogether appropriate microcosm for a nation so divided on so many issues. Even our blessed sport of football--the most American of pastimes--has come under attack for its potentially debilitating violence.

Graham Filler originally suggested that I write an article about football and veterans this week. After yesterday's rather excellent article by LincolnParkWildcat on the issue of the stars and stripes in college uniforms, I hesitated. Anymore, I feel as though the average American is bombarded by a slew of articles, opinions, and minor guilt trips about veterans. I thus worried that readers might find an exploration of the subject to be a bridge too far for OTE. Bear with me, dear OTE'er.

As I stumble through life, one of the most interesting aspects of being a veteran is discovering other veterans. I am always pleasantly surprised to realize that someone I'd never suspected had served in uniform in another era of their life. It actually happens quite often. I recall my friend's father--a kind, soft-spoken middle-aged banker named Bill who liked playing golf--pulling me aside at my graduation party to teach me the finer points of burning the grease out of Kiwi for a better shine on boots and shoes. He'd left his home in Indiana and became an infantryman in Vietnam. There was a gleam in his eye as he recalled the days of being a young, flat-bellied, steely-eyed grunt halfway around the world. Wherever his life took him in the years hence, soldiering never fully left him.

My late grandfather is a member of the US Army Ranger Hall of Fame. He was a man who never cared for college sports, mostly because he was never able to go to college. He was a lifelong Browns fan, though, from the 1940s onward. It was a relationship that never ran terribly deep. As a man who quit smoking cold turkey three times and stayed away from tobacco for years at a time, the Browns were an easy habit to dabble in without getting hooked. His semi-dismissive fandom had only one exception: Otto Graham. A signed picture of Otto Graham in his #60 jersey hung over my grandfather's chair. It was the only bit of sports memorabilia he owned, finding anything more to be wasteful folly.

The Best There Ever Was

Otto Everett Graham is still considered by many to be the greatest quarterback to ever roam the gridiron. A native-born son of Illinois, he attended Northwestern on a basketball scholarship. Perhaps because Northwestern was terrible at basketball even then, he became a football standout instead. In 1941, he helped hand Paul Brown's Ohio State team its only loss of the season. Two years later, he repeated the feat with a victory over Brown's defending national champion Buckeyes. That year, Otto and his teammates also enlisted in the U.S. Navy, but were able to continue playing while they awaited training. Graham ended his college career in 1944 when he departed for the Navy's V-5 pilot training program.

Following the war, Graham returned to football to play for Paul Brown's fledgling pro team, the Cleveland Browns. "Automatic Otto" led the Browns to a league championship game every year between 1946 and 1955. His record for QB efficiency stood until 1989, when it was broken by the great Joe Montana. Graham finished his pro career with an astonishing 114-20-4 record.

The erstwhile Wildcat-turned-superstar retired from football in 1956 and spent the remainder of his professional life as the head coach and athletic director at the U.S. Coast Guard Academy, save for a three year stint as head coach of the Redskins. He was asked many times to return to the pro ranks as a coach, but demurred. He disagreed with the "win at all costs" ideals of the pro game.

Graham still holds the NFL record for career average passing yardage at 9 yards per, and the career QB winning percentage at .814. He was inducted into the Pro Football Hall of Fame in 1965. Of course, Otto Graham is just one of a great many men who've served in uniform on and off the gridiron.

Lou "The Toe" Groza was a surgical technician at an Army field hospital in Leyte and Okinawa in WWII.

Chuck Bednarik, the granite-tough linebacker and center for the Philadelphia Eagles, flew 30 combat missions over Germany as a waist-gunner in a B-24 bomber. He earned the Air Medal five times over for his service.

Pete Dawkins won the Heisman Trophy as a halfback at Army in 1958. He would go on to command a company in Vietnam, a brigade in Cold War Germany, and eventually ended his career as the Chief of Staff of the Army's 101st Airborne Division. Dawkins retired as a Brigadier General.

The list goes on, of course. There are, blessedly, too many to mention. Even now, young men like former Army Ranger Alejandro Villanueva is playing for the Eagles after serving three tours in Afghanistan.

Football is often compared to war, with terms like "battle" and "warrior" bandied about. In years past, that bothered me. I'd bristle at the thought of comparing a game to the life and death business of war. Perhaps I'm mellowing in my old age, but I don't mind it so much anymore. I'm glad we live in a world--and particularly in a country--where the gravity of those terms is lost on most people. What an awful world it would be if everyone knew such things firsthand.

I am buoyed by the fact that so many veterans who saw so much of the ghastly nature of mortal combat found solace in football. Surely the debate will rage on about the dangers of such a violent sport. But for me, football is an incontrovertibly wonderful part of our grand American experiment. Each year, I look forward to another B1G season. Big Ten football ties me to my home and family, to friends of my past, and to the joy of competition.

What a privilege it is to be an American--by birth or by choice. What a blessing it is to take part in the splendor and spectacle of clean, honest competition. To drink a beer. To eat a hot dog. To share a rousing O-H-I-O or Ski-U-Mah with your mom and dad. Even in the months I count as the longest and darkest of my life, when I saw strange lands and barbarous acts that I had scarcely imagined, I rejoiced in the spectacle of Big Ten football. Halfway around the world, my blood ran scarlet and gray. I never cranked an aircraft without my Block O on my helmet. 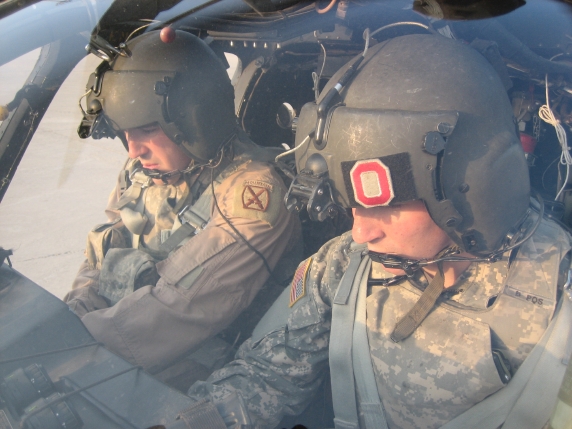 The Fourth will soon be upon us, and I have no doubt that the great issues plaguing our society will not soon abate. There is always work to be done. There are always problems to solve, wrongs to right, and injustices to be rooted out. As we pause to celebrate the birth of our nation, I hope that you all also find joy in family, friendship, fireworks, and many mayonnaise-rich dishes.

After so much talk about Otto Graham and America, I must defer to another great native son of Illinois for a fitting conclusion. In his inaugural address, Abraham Lincoln offered a parting thought that is as meaningful today as it was in 1861.

"I am loath to close. We are not enemies, but friends. We must not be enemies. Though passion may have strained it must not break our bonds of affection. The mystic chords of memory, stretching from every battlefield and patriot grave to every living heart and hearthstone all over this broad land, will yet swell the chorus of the Union, when again touched, as surely they will be, by the better angels of our nature."