Share All sharing options for: B1G 2015 // A Hate Addendum for the Paper Lions

Have you ever met someone through a friend, or perhaps through work functions, and thought "Wow, this person seems totally rad! We should hang. I am going to invite him to my next social function, because this guy would be an awesome addition to any group"?

So you invite said cool dude to your annual Chili Con Carnival, and for the first 30 minutes he's great. Everybody wants to meet him. He does a few parlor tricks. He tosses out a few zingers. He's a real mensch. What a great addition to the party! But as the night wears on, he becomes increasingly insufferable with each passing hour. His jokes get a little gauche. Then he starts making "wanking motion" when your wife asks him to use a coaster. By 9 PM his shirt is stained with cream cheese dip and Busch Light (that he brought in sixer-of-cans format, attached to his belt loop). A few hours later, he's slapping your buddy's wife on her backside and pissing in your kid's inflatable pool. "Good thing you invited me!" he shouts, mid-piss. "This party would've been mega f***ing lame without me!"

The next morning, you walk into the kitchen to grab your well-deserved Cup o' the Bean and, to your horror, you realize he hasn't left. There he is in his greasy white t-shirt, sitting in your chair, shoveling stale Fritos and lukewarm dip into his maw like a river dredge. Next to his feet you spy the 2-gallon tub of his "favorite best f***ing homemade ice cream on earth, brah." It's from Kroger, it cost $4, and it's now a puddle on your Stainmaster carpet.

"Sweet party, brah. Next week we're really gonna BLOW IT THE F*** OUT BRAH. (CLAPCLAPCLAPCLAPCLAPCLAP). Next thing you know, he's in your neighbor's garden stealing tomatoes for a "sick-ass bloody mary." Apparently, he considers your neighbor's yard to be indistinguishable from your yard. Like it's one big piece of land with no internal boundaries. 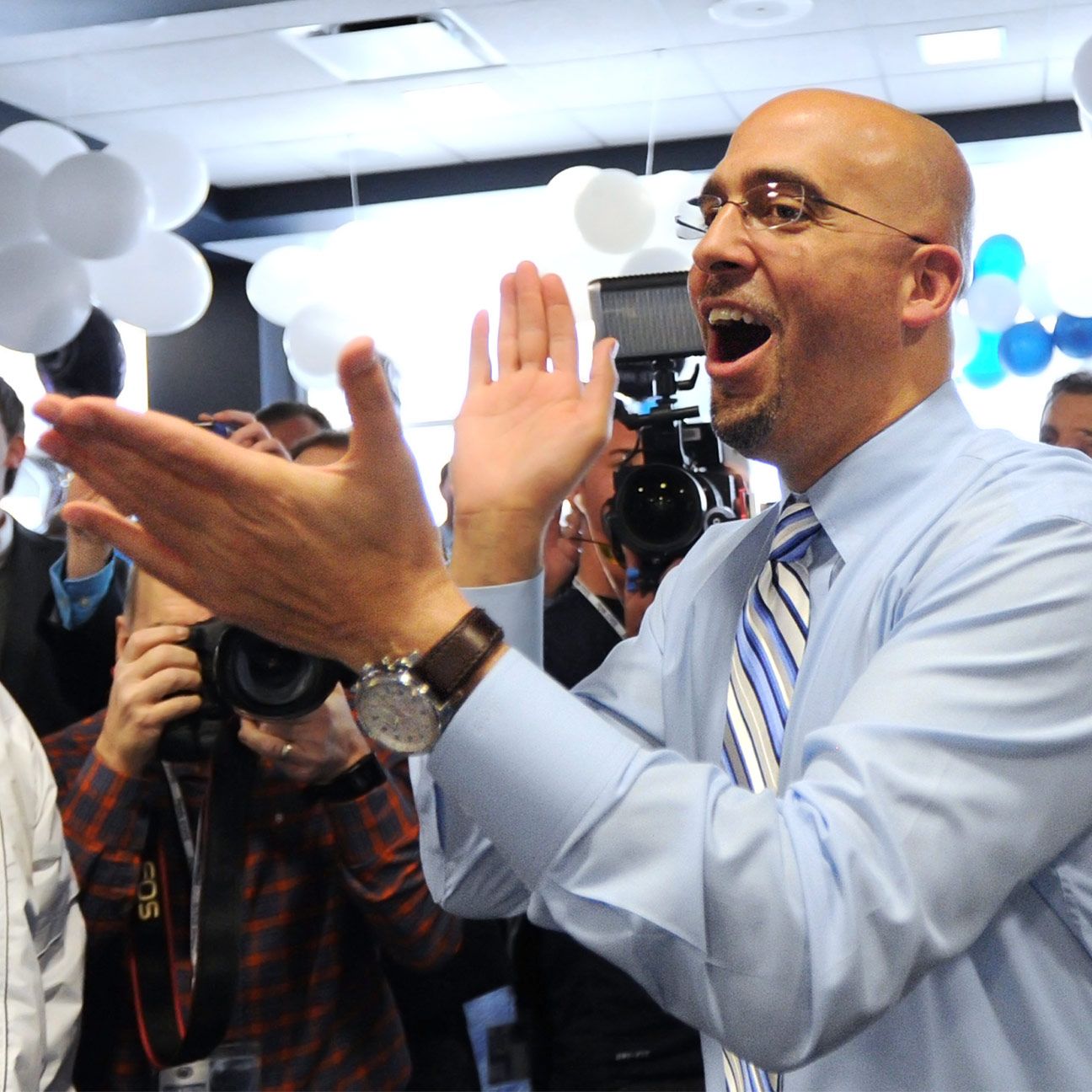 This is life with PSU in the B1G. Never have so many owed so little to so few. Pissing in the pool since 1993 and telling us all we should thank them for raising the temperature.

I wish my DeLorean wasn't waiting on a new tire. Otherwise I could go back to 1990 like the Terminator and kill the parties responsible for PSU's entry into the Big Ten. I'd grab the Big Ten by its tender midwestern hand and say "Come with me if you want to live." Or maybe I'd be Reese and PSU would be the Terminator? I'm not sure. The script isn't finished. Look, the point is that this crisis could be averted a time machine and a quick conversation about the last 15 years of PSU football program. I'd throw a few shotgun blasts Delaney's direction just to adjust his smug attitude.

Now we're stuck with PSU. It's like herpes. Sure, sometimes you don't see it and you might even put it out of mind, but it always comes raging back to ruin a good thing. PSU, thou art our collective itching, burning, and redness. Thou art our perpetual shame.

I'm sure PSU has some complaints about the B1G, too. They probably regret their decision to stop being Notre Dame for Poor People. It's easy to be a marquee program when you pick your opponents and your audiences year in and year out. Take heart, Pennsylturdians, now you're so firmly in the "also-ran" department that you can legitimize your secret love for your "rivalry" with Maryland. It'll be like two drunk members of the bridal party burying their loneliness with a coat closet tryst.

Don't believe me? Prior to joining the B1G, Joe "Come To Penn State" Paterno, had zero losing seasons in 28 years of independent play. None. Not a one. Yet that doddering hose-nosed pile of Metamucil managed to pitch 4 losing campaigns his first 11 seasons of Big Ten play. I guess there weren't enough Marylands on the menu then. Or Temples. Don't worry, we've solved one of those for you, and raised you a Rutgers. Now you can a three-way befitting the waaayyyy back corner rack of a truck stop video section.

Asking PSU to leave now is tough. They're sure they belong at the party, and if we asked them politely to leave they'd just try to burn down that miserable town they built out of cow patties and second-rate Pennsylvania steel. Because nothing matters more in State College than #tradition. No, I'm not talking about any of that scandal crap. That's classless, low-hanging fruit for unoriginal critics who can't get over some water cooler talk about Len Bias or don't know enough about PSU to offer better hate. I'm talking about the #tradition of being the worst carbon-based life forms in sports.

The Hierarchy of The Worst Assholes in Sports

6. The official viewing party at the Berlin Olympics

9. Spike Lee because he looks like a smug asshole.

But don't just take my word for it, let's go the film room...watch.0.html

Better get more Busch Light. Looks like we're stuck with these clownfrauds, and they threw away all the beers they had. At least I get to watch the five biggest guys they could find serve as matadors to the best defensive lines in football. As a bonus, we get to explore the concept of "essential" wins and an "elite defense" that couldn't keep Illinois out of the endzone. Sources tell me that PSU is very excited to have Army on the schedule this year, as they will vault to the top of the elite passing defense list since Army's QB is only vaguely aware of the existence of receivers or ballistic flight.

On the downside, we have to suffer through their worn-out bullshit for another year. The stupidest cheer in sports "We Are...Penn State." Groundbreaking stuff, you s***-sippers. Creativity in Pennsylvania means saying your name. Well done, loosers [correct spelling]. It's like 100,000 kindergarten students in Beaver Stadium. "I'm Brian and I like trains and blue and chicken nuggets."

Follow that crap with a recording of a fat tabby cat hacking up a hairball over the PA system and you have the worst venue in sports, in the worst college town possible. What did we expect from a fan base that thinks showing up in their undershirts is intimidating? When the dangerous guys show up in a movie, they're never driving a sinister white SUV. Take a hint.

I'd tell you to get f***ed, but I save that for Michigan. So instead...get lost. Go play with those jokes from Maryland. You deserve one another.