Some traditions in West Lafayette are better than others

Since we've reached the midpoint of Purdue week, I think it would be a good time to take a break from all of this depressing football talk. Instead, let's talk about traditions. Like many schools that have been around for a long time, there are a lot of traditions at Purdue University. Some of them are sports-related, others are not. Some of them are really good; others are lame.

I've decided to write a definitive ranking of all of the Purdue traditions that I can think of. If you disagree with my rankings, then you are incorrect.

The World's Largest Drum at the 2012 Penn State game

The World's Largest Drum is a really big bass drum that the marching band rolls out and hits with a big mallet. As you can see in the picture above, people can ride on the top of it. People who have nothing better to do with their lives can argue about whether there are bigger drums in the world, but when has a little hyperbole ever hurt anyone?

The Purdue Grand Prix is a go kart race that takes place at Purdue every year. Students race for different organizations (such as fraternaties) that have teams, pretty much like a mini version of real auto racing. When I went to school there, the track was next to Ross-Ade Stadium. Since then it has been replaced with a practice football field and moved off campus next to the new baseball field. Once the gate was open to the track from the street for some reason, so my friend drove around it in his car. I have never attended the Grand Prix, but it seems like a neat thing for a college to have.

Whenever the football team gets a first down, the band plays a short song. Then the fans go "1-2-3-4 First Down!" and point their arms in the direction that the offense is headed. At some point in the 2000s, some crazy college students thought it would be funny to say "Bitch!" at the end of the chant. I don't have the data to back this up, but it seems like the offense was really good when the chant first became a thing, and now the offense is terrible. So now there are barely enough students at the games that want to say bitch, and there are a lot less opportunities to do it. It is obvious to me that the collapse of the football team has been orchestrated by the Purdue administration as a way to cut down on the yelling of bitch at football games.

At some point in the 2000s (notice a trend here), student fans at basketball games started yelling, "IU Sucks!" at the end of a song that is played towards the end of basketball games. This happens at every game, including football games now. It was kind of funny to begin with, but now it is just sad. Chanting IU Sucks when the team you are rooting for is not as good as IU is pretty much equivalent to the classic Overrated Chant, which I also despise. I believe it was at the 2010 Bucket game (when there were still a fair amount of people that went to Purdue football games), when, after IU won in overtime, a drunken IU fan was yelling, "Who sucks now?" after the game. He was completely right. The IU Sucks Chant sucks.

There are a lot of astronauts that went to Purdue, including heavy hitters like Neil Armstrong and Gus Grissom. Take a look at the list here. It's pretty impressive. 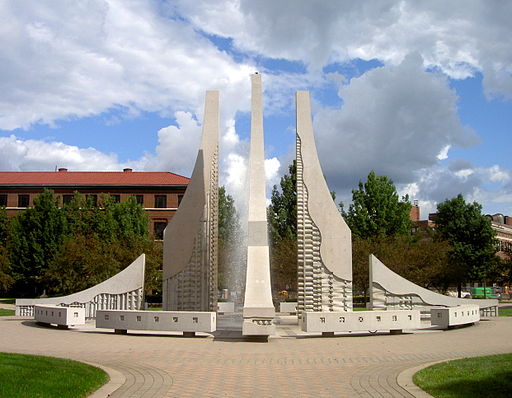 The Engineering Fountain shoots water up about 35 feet or so with pretty good force. The water shoots up in stages, starting with no water and ending up near the top of the fountain. People run through the fountain; this is called a Fountain Run. Somebody got hurt at some point, so they put a big metal cylinder that the water shoots up through in 2001. So running through the fountain is nowhere near as cool as it used to be, since you can't have water shooting up into your crotch. It comes down from above and doesn't hit the crotch region with as much force.

The Veterinary Department has a cow named Buttercup that has a hole in its side. On the other side of the hole is the cow's stomach, so people can watch it digest food. For events such as Spring Fest, they let commoners come in and stick their arms in the hole. It is pretty neat, you can feel the mushed up grass and it's stomach muscles working. The cow does not seem to care at all if someone has their arm inside of it or not.