Now that we've had Pretzel Bites, French Fries, and New Coke, it's time for the main course. Rather than go with a normal, tasty food, we're going exotic. 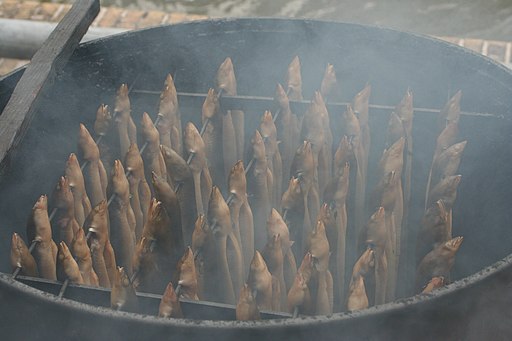 Photo by Labberté K.J. on wikipedia.org

The main course of the Purdue Potluck is going to be eels this year. What do eels have to do with Purdue? Nothing, but the discussion today is talking about Ross Els, which is really close to Ross Eels. So eels it is. Enjoy the eels.

Now it's time to talk defense. I'm not going to look up the stats, but trust me, Purdue's defense was not good last year. Defensive Coordinator Greg Hudson was fired at the end of last season, and Ross Els was hired to replace him. Els' last job was as a LB coach for Bo Pelini at Nebraska. Rather than be content with one DC, Hazell also promoted Marcus Freeman from LB coach to co-DC.

What are your thoughts on co-coordinators in general? Is that a good idea? Or is it too many cooks in the kitchen? Do you have any thoughts about Purdue's co-DCs specifically?

StewMonkey13
Wasn't Els a high school coach about 3 years ago? Also, LBs coach for Pelini? That's not exactly high praise. Also, the whole co-coordinators, are there defined roles for each? That wouldn't be so bad, but still, someone has to design and call the defense, and that should be the same dude. So, not a giant fan.

Candystripes for Breakfast
Defense is overrated. Next question.

Okay, I'm back. Sorry baba. Okay, so here's the thing about Ross Els. He really was not an awful LB coach. He was just like, fine. When there was talent, he put people in position to succeed and to be fair, he was not the weakest link on defense. That said, he was also the Recruiting Coordinator, and in that role, he was literally the worst. The absolute worst. Add to the fact that he has trouble multi-tasking and it's a questionable hire when trying to make good on past mistakes. Oh, and your run-gap assignments are destined to failure, but that's probably a thing that would happen anyways.

As for the two coordinator system, it seems to me that these schools are trying to be like big banks. Everyone gets a title. AVP? Sure, you talk to people daily. That seems appropriate. I'm going to assume that one guy will call actual plays and the other kind of mopes around and blames that guy when things go wrong? Yeah. Sounds right.

Graham Filler
Purdue and Indiana, year after year, have talent deficiencies at the Safety and Cornerback position. Lack of speed, lack of size, lack of general talent. You could hire the ghost of Buddy Ryan and I'm pretty sure all the coaching and scheming in the world won't make a difference. But please, Purdue, prove me wrong.

WhiteSpeedReceiver
I think it's much easier to have co-DCs than it is co-OCs. You could have them focus on their specialties and bring their own unique abilities to the group. As long as there's a clear chain of command in play-calling responsibilities, it could work very well if you had smart coaches that had a good scheme with excellent players. But if you're Purdue...

GoForThree
The answer to that always depends on your last experience with a co-coordinator setup. From a DC perspective, I'm a big fan. That's a completely subjective analysis based on Ash and Fickell producing great defenses. From an offensive perspective...Warriner & Beck is a match made in hell. Choose your couple wisely.

LincolnParkWildcat
It seems that Hazell is really scraping the bottom of the barrel on this. Or throwing everything on the wall and seeing what sticks.

MNWildcat
It takes a lot to make a stew.

Aaron Yorke
There are already too many coaches on every football team. Do we really need an assistant secondary coach? I don't think anyone needs a co-defensive coordinator, either.

87Townie
Co-coaches sucks. Period. But let's be honest here...can anything make your defense worse? In your win against Nebraska last year, it took Ryker Fyfe practically handing the ball off to your team, for you to get to 55 points. Nebraska had 5 turnovers...you had none. And the Nebby offense still put up 52 points on you. That's a seriously broken system. That's a "wipe the slate clean and start over" broken system.

babaoreally
Freeman doesn't have a ton of coaching experience, so I think they decided to hire someone from outside rather than just straight up give him the DC title. I really don't know anything about Els, except the Corn People don't like him. I have no problems with trying out a co-DC system, since the solo DC system wasn't working out too well.

Thomas Speth
Was Els the LB coach at Nebraska when the end zone stopped more runs than the Nebraska linebackers in the 2012 CCG? Because if so... What the hell? Was there literally no one else? I mean Christ, literally no one else? Like a good high school coach or something? I might actually get angry if we attempt even one pass against Purdue. Better off averaging 15 yards a carry /Wisconsin scored again

Andrew Kraszewski
I certainly have no specific thoughts about Purdue's co-coordinators specifically, and as an OTE writer I resent the implication I would do any disgraceful research before crafting my #hottaek. So no, no idea if this specifically is going to work.

That said, the success of the co-coordinator thing in general all depends on the staff chemistry. If guys are willing and able to share responsibility, it can work just fine. See: MSU, which had 4 coordinators last year and rode that collective scheme to the conference title and the playoff. Of course, at its worst, you get Tim Beckman's system where different guys call the play on different downs. So...yeah. We'll just have to see where on the spectrum this arrangement lands before passing judgment. Purdue does have a decent group of seasoned linebackers though, so the new defensive bosses do have some pieces to work with.