The first point of contention is whether the game played between Rutgers and Princeton in 1869 actually counts as a game of football. The NCAA officially acknowledges this game, but considering how dumb the NCAA is, this might actually hurt Rutgers' argument. That same article also presents rather damning evidence against it counting as football:

The game’s rules were far different than they are today. The teams were made up of 25 players and the goal of the game was to kick the ball in the opponent’s goal. Aside from kicking, players were allowed to bat the ball with their hands, feet, heads and sides. Carrying or throwing the ball was not permitted.

The Princeton athletics site also confirms the style of play:

Though played with a round ball, used Football Association (soccer) rules, and closely resembled rugby, this game marked the beginning of intercollegiate football.

Calling a game about kicking a round ball through goal posts "football" doesn't make you an innovator, Rutgers; it makes you European.

Another interesting note on that first game straight from Rutgers' own site:

To distinguish themselves from the bareheaded visitors, 50 Rutgers students, including players, donned scarlet-colored scarfs which they converted into turbans.

These combined facts seriously call into question the accuracy of the "The First Game" statue mentioned in the Rutgers Traditions article. I guess you can't really fault Rutgers for misrepresenting the truth considering that putting up a statue of a guy in a turban playing soccer probably wouldn't make for great PR.

While Rutgers fans love to mention the fact that they won the first college football/soccer game 6-4, they almost always fail to mention the other game of that "season". There is little written about the second game, held at Princeton, other than the final score of 8-0 for Princeton. I guess even in the 19th century when the primary form of entertainment was trying not to get dysentery, watching Rutgers get blown the fuck out isn't worth mentioning.

A third game had originally been planned, but was cancelled due to teachers on both sides complaining about the games distracting from academics, leaving the season series even at 1-1.

Of the three groups to determine the national champion for that year, both the Billingsley Report and the National Championship Foundation both awarded the championship solely to Princeton based on the strength of their second game clownfucking of Rutgers, while college historian Perke H. Davis gave both Princeton and Rutgers a share of the title, because participation awards are fun.

While digging through the dusty archives of the Internet to discredit Rutgers' football history, I happened to discover a few points that highlight their true identity in the annals of college football: Buttgers. All of the following quotes are taking directly from Rutgers' athletic site and seriously call into question why they were included, other than to document the schools storied legacy of being butt.

Every college probably has the humorous tradition of some player who has scored against his own team. This tradition at Rutgers dated from this first game, for one of her players, whose identity is unknown, in the sixth period started to kick the ball between his own goal posts. The kick was blocked, but Princeton took advantage of the opportunity and soon made the goal. This turn of the game apparently disorganized Rutgers, for Princeton also scored the next goal after a few minutes of play, thus bringing the total up to four all.

No, every college absolutely does not have a humorous tradition of scoring on themselves. Only somewhere like Buttgers would identify self-destructive ineptitude as a funny tradition.

Someone by a random kick had driven the ball to one side, where it rolled against the fence and stopped. Large led the pursuit for the ball closely followed by Michael. They reached the fence on which students were perched, and unable to check their momentum, in a tremendous impact they struck it. The fence then gave way with a crash and over went the band of yelling students to the ground.

"Next period Rutgers bucked, or received the ball, hoping to repeat the flying wedge," Herbert's account continues. "But the first time we formed it Big Mike came charging full upon us. It was our turn for surprise. The Princeton battering ram made no attempt to reach the ball but, forerunner of the interference-breaking ends of today, threw himself into our mass play, bursting us apart, and bowing us over. Time and again Rutgers formed the wedge and charged; as often Big Mike broke it up.

This "Big Mike" was truly Prepared for Buttgers, and his legacy lives on to this day through his descendant (probably), our own beloved commenter M1EK. 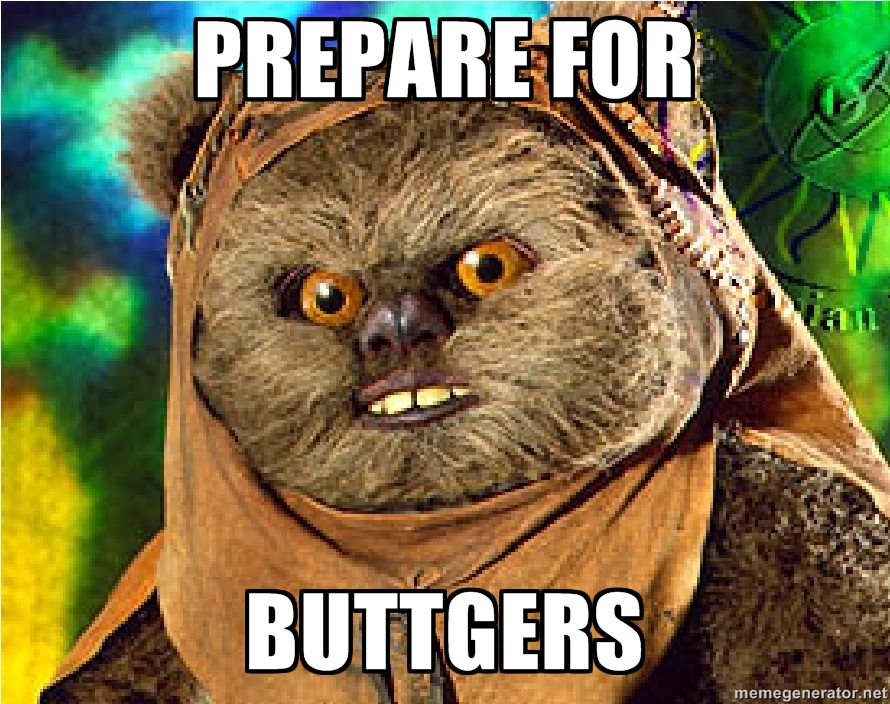