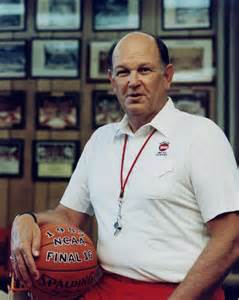 This FanPost is offered up to provide some historical perspective of Maryland's men's basketball. I thought a good topic for discussion is when exactly TMBAs (that's Typical Maryland Basketball Assholes) came into being. Looking back, it was quite a while ago; and came about as a direct result of a Dookie. Not JJ Redick, Jon Schyer, Shane Battier, Bobby Hurley, or even Mike Krzyzewski.

Nope, TMBAs can trace their lineage to 1969 when Athletic Director Jim Kehoe hired a 37 year old coach who was the hot up-and-comer of his day. This coach, who had taken Davidson College to back-to-back Elite 8s in 1967-68 and 1968-69 only to lose to Dean Smith's North Carolina Tar Heels (more on that later) was Charles Grice Driesell.

Driesell, a 1954 Duke University graduate, arrived in College Park proclaiming to make Maryland men's basketball the "UCLA of the East". Problem was, Maryland's men's basketball had been up until that time non-existent: 1 ACC Tournament Championship (1958), 1 NCAA Tournament appearance (1958), few if any players in the NBA (Baltimore's Gene Shue being the lone exception), and playing in front of thousands of empty seats in Cole Field House.

Lefty set the tone for how Maryland's men's basketball was going to change at his introductory press conference, where he said, "The only time I plan a speech is when I’m going to get paid. I asked [Athletic Director-designate] Jim [Kehoe] if I was going to get paid for this, and he said, ‘No.’ So I haven’t got a prepared speech."

Things started slow for Lefty, with one notable victory being an infamous 31-30 OVERTIME victory over #2 ranked South Carolina in 1971. However, when McMillan and Elmore became eligible Maryland exploded to a 23-7 season and NIT Championship for 1971-72 (back when only conference champions went to the NCAA Tournament). More wins came, and in 1973-74 Maryland was the best team to never make the NCAA Tournament - prompting the rule change allowing more teams than conference champions to make the big dance.

Maryland won a lot of games during Driesell's 17 seasons in College Park, but often lost big games in painful fashion. Dean Smith's Tar Heels were often the primary nemesis to Lefty's teams of the 70s and early/mid 80s. However, on 2 occasions Lefty got the last laugh: in 1976 Maryland's 3-guard lineup went to Chapel Hill and hung the worst home loss on Dean Smith's Tar Heels; and 10 years later Maryland scored a 77-72 overtime victory being the first visitors to win at the Dean Smith Center. Also, Driesell's Terps were 1-5 in ACC Tournament Championship Games; however, the lone win came in 1984 (my senior year of high school) against some young coach at Duke named Mike Krzyzewski. 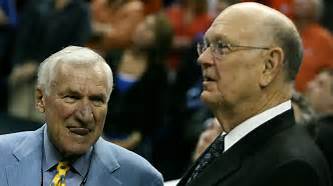 Driesell's tenure in College Park sadly ended in October 1986 (my junior year at Maryland) amid the controversy of Len Bias' cocaine-induced death. However, The Lefthander completely changed Maryland men's basketball: changes that can be seen to this day. Midnight Madness - Lefty started it in the early 70s. Multiple conference teams in the NCAA Tournament - the 1973-74 Maryland team was responsible for that. 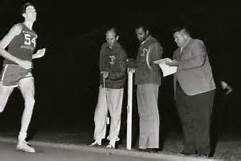 And Typical Maryland Basketball Assholes hanging out on sports blogs like Off Tackle Empire - yep, Lefty caused that too... as men's basketball didn't exist in College Park, Maryland prior to 1969. 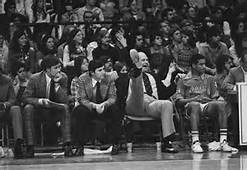 Lefty Driesell 'Reflecting' During a Game at Cole Field House