Games with Louisville and, potentially, Michigan State. Someone’s got it out for Minnesota. 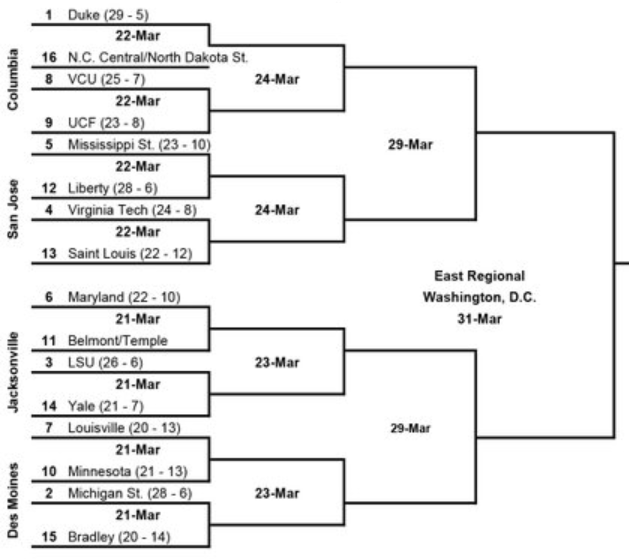 Round 1: vs. [7] Louisville Cardinals

Boilerman Breakdown: So, you want to have a little Pitino Bowl sans the father? Ok, the committee was happy to oblige.

Offense: The thing about a Chris Mack team is you’re going to get a very balanced effort. Add in the leftovers from daddy Rick’s talented (albeit scandalous) teams and the product should look pretty good. They play at an average pace, generate a fairly even amount of points from both deep and inside the arc, and are very good at hitting their free throws, converting at a 77.5% clip.

Go to B-Loco on Thursday night and see if you meet a Gopher basketballer.

If Minnesota wants to win, they have to play good defense while keeping the Cardinals off the line. However, looking at their results down the stretch, they’ve sputtered in the offensive output department. Since the middle of February, they’ve only had two wins, both over a not-good Notre Dame.

Defense: Again, with a Chris Mack team, they’re very good on the defensive side. This year’s team features a solid defense with Top 25 rankings in efficiency, effective FG%, and 2-point %, likely thanks to their size in the frontcourt. However, they haven’t been super effective in generating turnovers. There’s opportunity for the Gophers if they can force some missed shots and get the ball into transition.

WSR: At least we’re in the tournament? Good God. Even if we get past Louisville, we get a date with Sparty? Oh come on NCAA.

MNW: Beez already explained why this happened (and I believe I saw Lunardi clarify that since MSU and Minnesota played only once, they can meet in the Round of 32). But still...yeah. At least Gophers fans can drive down and not worry about spending more money on a hotel in Des Moines.

MNW: You might’ve heard of this Michigan State team. They lost to Louisville early in the year, too. Not sure what happened to them after that.

Oh yeah, Louisville. They lost on the road at Indiana, behind a double-double from Jordan Nwora. I’ll be curious to see who Minnesota throws at Nwora (Amir Coffey is my guess, but what do I know), but more curious for me will be how the Gophers deploy their frontcourt, especially if Stockman is unavailable. Murphy will have his hands full with Steven Enoch and/or Malik Williams, and it’ll make Jarvis Omersa and Michael Hurt that much more important.

WSR: I mean, something dumb could happen on Thursday and we could beat Louisville. Weird things happen in the NCAA tournament, and they’ve got a first-year coach in Chris Mack.

Jordan Murphy could put the team on his back and decide that it’s not time to end his career in Maroon & Gold just yet, and maybe noted MURDERVIKING Matz Stockman could come back to haunt the program that once jettisoned him. (UPDATE: It sounds like Stockman will miss the game following a rather ugly and unintentional elbow to the back of his Norsk dome last weekend against Michigan. Crap.)

After that we’re at the whims of food poisoning and bagmen getting to refs for us to advance past Saturday.

MNW: They’d all be upsets. Any win for the Gophers in the NCAA Tournament is an upset.

WSR: It will be interesting to see who gets back to the Twin Cities from Des Moines faster on Thursday evening between the team and my car.

Boilerman: Yeah, I don’t see them getting past Louisville either.

MNW: I remember meeting almost the entire Gopher men’s basketball team at Burrito Loco after the 2013 NCAA Tournament. For some reason, a buddy and I were out that night at the bar, and he had absconded with some young gal. I was assuming he’d come back...until he didn’t. So I was finishing my drink, and into a near-deserted bar walks a gaggle of towering basketball players, and they begin to order drinks right next to me.

I was wearing a Northwestern pullover or something, and I got shit from Elliott Eliason (no, seriously) and Chris Halvorsen (who also went to a rival high school), both of whom made sure to mention how much they hated Bill Carmody and the 1-3-1 zone. But also mentioned how bad Northwestern was (they’d lost 55-48 at Welsh-Ryan earlier that year).

The Gophers fired Tubby Smith like, a day later, and here they are.

My point is, go to B-Loco on Thursday night and see if you meet a Gopher basketballer.

How far do the Gophers go?