When first realized that I was going to be in Hawaii during football season, I though that it might be interesting to see a game, after all, what are the odds of being there when there’s a home game, and having the time. To be honest, I forgot about it until MNWildcat’s weekly DWT:WT (which you do read and use religiously, right?), which prompted me to check to see if they were going to be playing at home when we got there, leading to this: 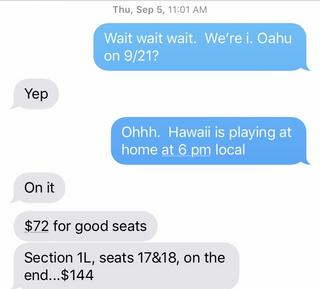 The plan was to go to the swap meet first and try to find some vintage logo shirts to wear, unfortunately, the meet was already closed when we got there to clean up for game parking.

We checked in to where we’re staying (Aulani) and headed to the game with minutes to spare. Just enough time to stop at a tent to pick up a new shirt to wear. We didn’t want anything with the current spiky H, as I said, we wanted vintage logo, and yeah, right there in the center fit the bill. 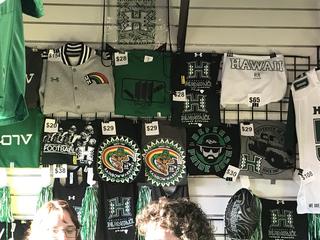 Who buys a sweatshirt in Hawaii? Oh, right. Tourists and the locals die if the temperature hits the 60s 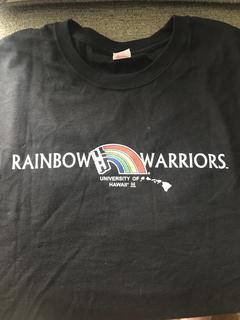 The front is cool 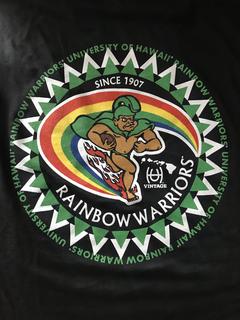 The back is even cooler

A quick shirt change and we were ready to go.

Walking into the stadium is a throwback. It’s old, and looks it, but visions of Pro Bowls, bowl games and others came back to me. And the view is great, sun setting, palm trees in the background. Seats in row 6, right around the 40, almost too close because there was a truck along the sideline shooting video. It was the visitor side, obviously mostly empty. 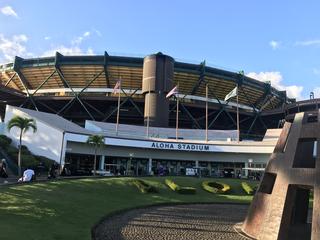 Coming up on the main gate 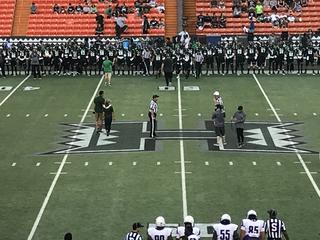 Even the spiky H is pretty cool

There are worse places to watch a game

The game itself was pretty ugly, 4 Rainbow Warrior turnovers, and they still won by a ton, which was perfect for us. Go ‘Bows! Totally worth it. I recommend going it you have a the chance.

Traffic wasn’t bad. People have always warned us about Honolulu traffic, but it’s not really any worse than any large city, or , in this case, gameday. It’s just an issue because so many tourists, as I was, don’t really know where we’re going, and there simply aren’t enough roads. Parking at the stadium was cheap , $8, and easy, but the lot seemed like it was mostly full, even though the stadium wasn’t even close to full. 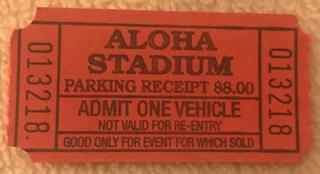 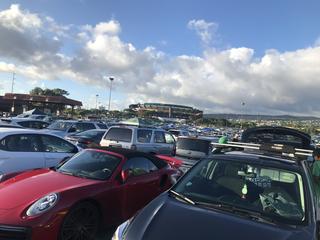 Yes! Maybe! It’s hard to tell. Like I said, the lot was full, there were a number of tents and tables set up, but few grills that I could see. I did see a bunch of drunk there’s-no-way-you’re-21 co-eds wandering around with beers, so use that as your measuring stick.

You bet, and it’s perfectly overpriced, as expected. Food was largely traditional stadium stuff, with some odd exceptions And more local options, such as the saimin and fish tacos. I was not expecting a gyro stand in there. 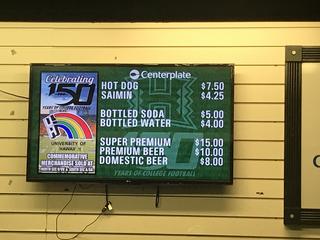 Stella is super premium. They also had some local options from Kona Brewing

Well, there was a giant line getting in for them before kickoff, and this was the section at kickoff. Not full, but pretty good for a stadium that’s not right on campus and non-P5. 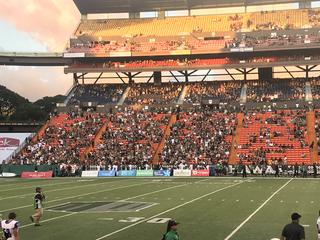 Not great, but not terrible

But this was it after halftime, so as the beer buzz disappeared, so did they. That it was 28-9 at the half probably didn’t help. 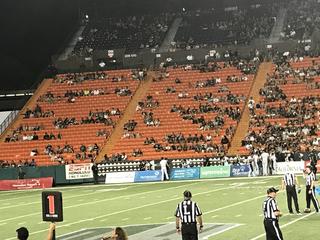 Of course not. It’s probably only 15-20% rust. I honestly think I saw daylight through a section of the upper deck. It’s old and shows it in places. It is nice that every seat is an actual seat. I believe they’re in the process of building a new one, so we'll see what happens.

Surprisingly, the noise level was decent. While the stadium was nowhere near full, the fact that it’s a metal bowl means stomping just shakes the place, and people beating of the Northwestern fans, excuse me, seat backs also adds to the noise. The fans know to ramp up the noise on defense on 3rd and 4th downs. I would imagine if it ever was full, it would be pretty loud.

They were fine. The halftime show was full Disney music and costumes, so that was a bit crazy. Obviously, I have no idea about spats based on this. 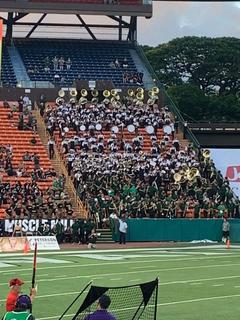 They look almost respectable here before they changed into costumes

Yes. And in the interest of not inviting death threats from that group, she was good.

They do. As an Iowa fan, I’m contractually obligated to be dismissive of it due to size. 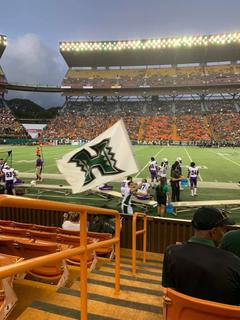 Raising Cane’s does sponsor replays and such. 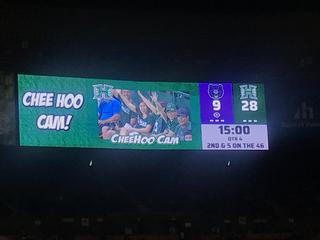 I have no idea what this is. UD tells me it's a Samoan challenge