With a new decade upon us, we have an opportunity to look back at the last one and reflect on some of the great individual performances during that time. I've done the research to identify the top single season efforts by players of the Big Ten from 2010-2019.

How do you judge performances?
I am not judging players by a single metric. Instead, I looked at most stats and identified players who may have excelled in their own particular way. I tried not to be biased, but I'm still human. For this edition, I've only evaluated receivers with a 1000-yard season in the last decade (with two notable exceptions).

"But where's _______?"
Chances are, he wasn't as good as you remember. In fact, what started all of this was pointing out that Saquon Barkley was never really as good a pure running back (statistically speaking) as people remembered. In fact, his best year running the ball ranks 22nd in yards per game in the Big Ten during the last decade. And that's why I looked at more than just one metric...

"Then why'd he get drafted so high?" or "He's way better in the pros than these other jabronis."
As beezer07 pointed out, Jamarcus Russell was a high draft pick too. I don't care where they went in the draft or what their production has been in the NFL.

Two of _______'s seasons should be on here.
I've decided to limit each player to just his best season.

This might end up being the most controversial pick. How can the guy who had the 2nd most yards in the last decade only be an honorable mention? Full disclosure: yes, I am a Michigan State fan. No, I didn't exclude Gallon because he went to Michigan. Narrowing this list to 5 turned out to be much more difficult than with the running backs. I narrowed it down to four guys for the final two spots and he just got edged out.

Jeremy Gallon's 2013 season was highlighted by an incredible Big Ten record breaking performance against Indiana in which he had 14 receptions for 369 yards and 2 TDs. He also had great games against #3 OSU (9 rec, 175 yds, 1 TD) and #14 Notre Dame (8 rec, 184 yds, 3 TDs). The biggest hit against him is that those games accounted for over half of his yards. He had only 1 other 100+ yard game, and 5 games under 50 yards. He just didn't show up consistently. Still, he accounted for an impressive 42.6% of Michigan's passing game.

In case you glossed over it, Smith averaged 28.2 yards per reception. Let that sink in. The next closest of all the players I looked at was 20.3 yards per reception. Smith only had 33 receptions, but over a third of them went for touchdowns. Smith almost made my top 5 for these mindboggling numbers. ESPN lists the top 50 receivers when you looks at individual stats leaders. You have to go back to 2011 to get any player in the country with a better average (Stephen Hill, GT, 29.3). Only one other player in the last 15 years has a better average.

Smith was a home run threat on every play, but just like baseball, there aren't that many home runs per at bat. He only twice broke 100 yards in a game that season, and in 9 of 14 games had 2 or fewer receptions--granted he averaged 37 yards per catch in those games... While he put up video game averages, his low usage keeps him out of the top 5.

Besides being the top receiver in 2014, there's not a whole lot going on for Lippett statistically speaking. In fact, he's only the 3rd Spartan receiver in terms of receiving yards. Lippett's inclusion is due primarily due to his big play potential and the fact that he started one game (and played in two) as a cornerback for the Spartans, and proved himself to be pretty good in those limited snaps. In those games he recorded 4 passes defended, which doesn't sound like a lot until you compare it with the official stats of true CBs (Thorpe winner Darqueze Dennard had 10 in 2013).

He also did this in 2014, a sure foul in today's game, but brutally legal at the time:

Lippett did later check to make sure Baylor's kicker was OK--he was and had a sense of humor about it.

"I am alive. It has been a great season. I am proud to be a Baylor Bear. #SicEm."

"@Tony_Lippett14 great game my friend. Where did you come from?"

If Lippett's numbers are unimpressive, you're looking at Morgan Jr.'s and thinking "wut?" As compared with the rest of the conference, Morgan Jr. is middle of the road. A good season, not a great one. But as compared with the rest of Nebraska's long history of wide receivers, he's one of a kind. That's because he became Nebraska's first ever 1000-yard receiver. It's true. Look it up. And for that, he gets an honorable mention.

Brycen is on here for no other reason than that he had the most yards by a tight end in the last decade. More than Hockenson, Fant, Gesicki, Fumagalli, Butt, Williams, Pedersen, Kendricks, and all the other big name tight ends to come out of the conference in that time. Props to him. If anybody knows of any Big Ten TE with more receiving yards than Hopkins, let me know below. (Rutgers' Marco Battaglia and Maryland's Vernon Davis both had more in a single season, but neither team was in the Big Ten at the time.)

Consistency, thy name is. When you compare McNutt's 2011 season with Gallon's 2013 season, not much separates them. They averaged 105.6 and 105.9 total yards per game, respectively, both featured heavily in the passing game (43.1% and 42.6%), and averaged a similar number of yards per reception (16.0 and 15.4). McNutt did score more touchdowns and was a little more serviceable running the ball, but where he shines is in his consistency. 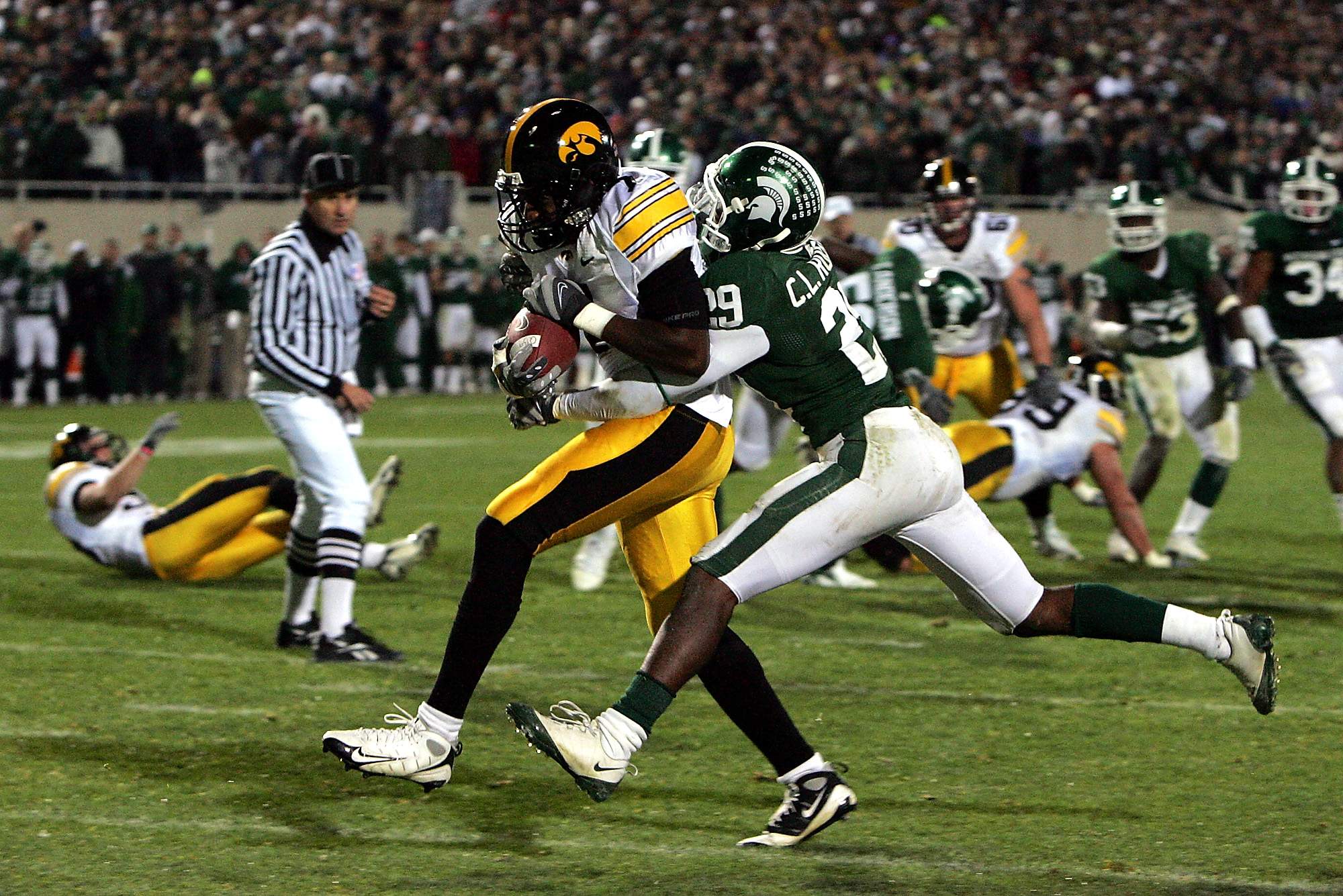 We read earlier that Gallon had four 100-yard games, and five games under 50 yards. McNutt on the other hand had eight 100-yard games and just two sub-50. While not as flashy (184 yards was his season best), he was an influence game in and game out. No time more clutch than in catching the winning touchdown in the final play of Iowa's 15-13 win over MSU. (As I was writing this, I very nearly switched the two. Consistency vs. flash is a tough tiebreaker.)

At first glance, you have another case of really good, but 4th best? Certainly he was a prolific wide receiver, putting up the 3rd most receptions and 5th most yards per game. But Jenkins appears here not just for his numbers, but for his circumstances. Jenkins' 1,276 yards accounted for 53.3% of Illinois' total passing yards that year. And this wasn't a case of 2-3 receivers being their entire passing game (see below). Jenkins was it.

A.J.'s 1,276 yards were 1,050 more than the next best receiver on the team (Spencer Harris at 226 yds). He had 8 of the team's 14 touchdown catches. He had 40% of the team's receptions, more than the next four players combined! Suffice it to say, without Jenkins, Illinois doesn't start 6-0, getting the hopes and dreams of our very own Thump up (only to have them shattered with six consecutive losses--but hey, they made and won their bowl!). His highlight game was in a close 38-35 win over HATed rival Northwestern, in which he had 12 receptions for 268 yards and 3 TDs. Unfortunately, after that magical six game opening stretch, teams must have figured out that triple covering him was the way to go, and he only had over 100 yards once more. 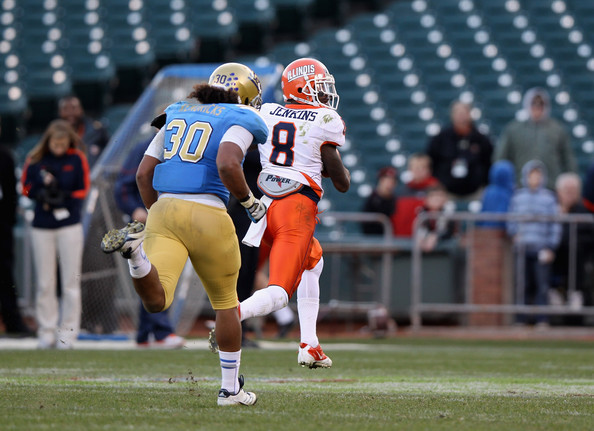 This might be a cop out, but I can't include Tyler Johnson without including Rashod Bateman. On his own, Johnson had one of the best seasons by a Big Ten receiver in the last decade. Throw in Bateman and you'd be hard pressed to find a duo that had a better season than them. Together they accounted for an absurd 77% of Minnesota's passing offense. Only two other receivers on the team had over 100 yards for the season (Autman-Bell with 371 and Douglas with 157). You could definitely make the argument that they both excelled based on the fact that defenses had to cover both of them on top of stopping a potent run game, but, well, I don't have a good argument against that. This is my list and I can do with it what I want. 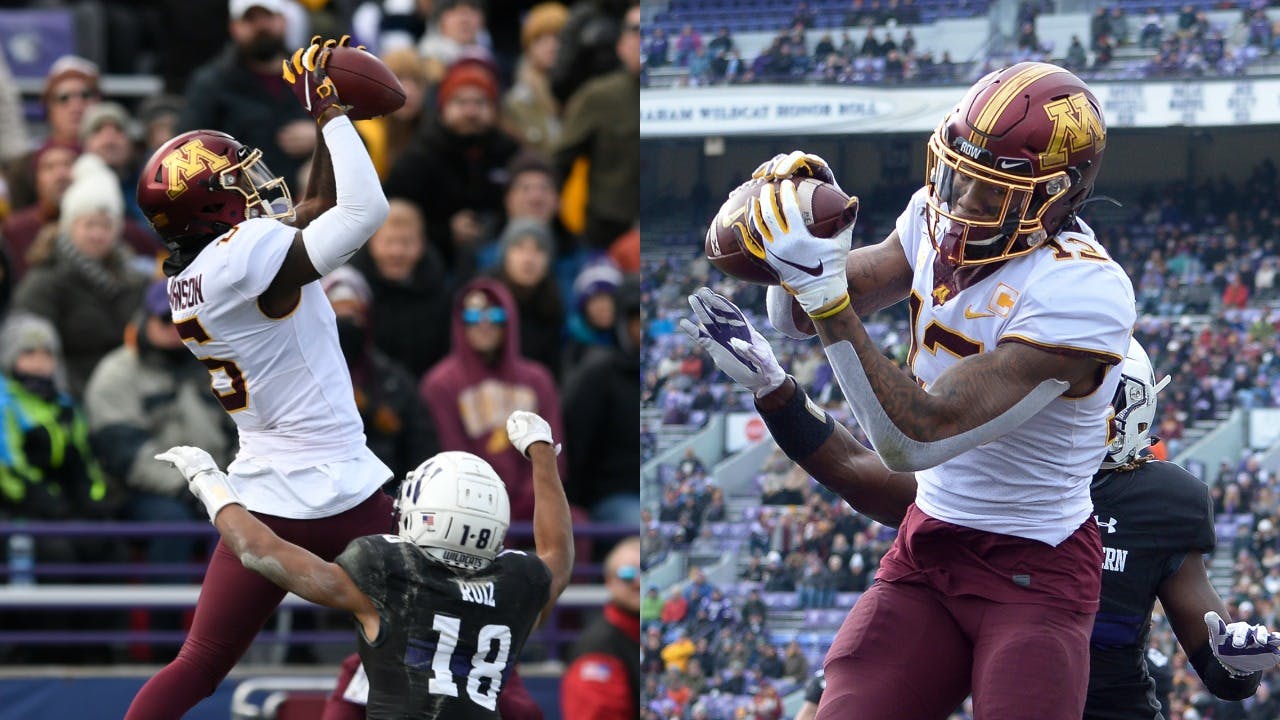 In their four biggest games of the season (PSU, Iowa, Wisconsin, and Auburn), the two combined for 1,064 yards and 7 touchdowns. Yeah, they lost two of those games, but it wasn't for lack of their production. But if I had to keep just one for this ranking, I'd keep Johnson and move him down to 4th.

As a pure receiver, there's no doubt that Allen Robinson's 2013 campaign was the best of the last decade. His 1,432 yards are the 4th most in a single season by a Big Ten receiver, and the most since 2001. 97 receptions is tied for 5th most in conference history. And like Jenkins, Robinson was the lion's share of the passing offense (pun not intended--I'm not that clever). He had 1,099 more yards than the next best receiver on the team.

And like McNutt, Robinson was incredibly consistent, recording over 100 yards in 8 of 12 games, and being "held" to under 50 in just one, a 34-0 drubbing of Kent State. Robinson twice recorded 173 yards in a game, his season high. What really makes Robinson's number stand out is that due to the postseason ban Penn State was serving at the time, Robinson was able to accomplish these stats in 12 games.

Although he didn't put up monster numbers in the 43-40 4OT win over Michigan, it was his catch at the 1 yard line with 27 seconds to go in regulation that showcased his talent.

There aren't enough superlatives in the dictionary to describe how electric Rondale Moore was in 2018. I wasn't including return yardage in my decision, but I'll mention that Moore added another 744 return yards to his totals. In case you forgot, Purdue beat #2 Ohio State 49-20 thanks in large part to the heroics of Moore (although the whole team showed up for that game). Moore went off for 12 receptions, 170 yards, 24 rushing yards, and 2 TDs, including one of the best the conference has seen in a while.

Rondale was a staple of the offense and it showed in the number of touches he had. Credit to Brohm for recognizing what a talent he had and letting him work. Moore's 114 receptions were far and away the most by a Big Ten receiver the last decade. In fact, Chris Daniels (Purdue 1999) is the only other receiver in Big Ten history with more catches in a single season (121). Moore had double digit receptions in five games. For frame of reference, of the other Big Ten receivers in the last decade with at least 90 receptions, Robinson had three games with 10+ receptions, Jenkins had two, Austin Carr had two, and Parris Campbell had one.

And Moore did this as a freshman. Sadly, Moore injured his leg in the 4th game of the 2019 season, but not before continuing to do what he does by going for 24 receptions, 347 yards, and 2 TDs in his first two games. I know I'm not alone in wishing him a full recovery and many more years playing football in good health.

Next Time on "You're Wrong. Who Front-Paged This? We Want Answers."

And there you have it. The top 5 seasons by wide receivers of the last decade as voted upon by me. Next I'll take a look at QBs, what is sure to be a dull affair.