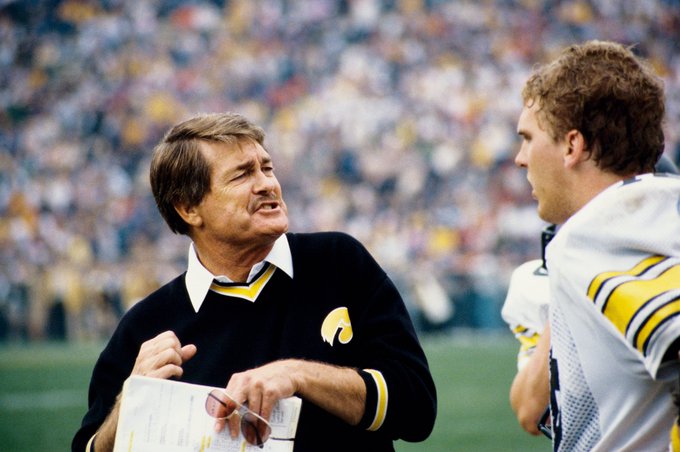 "You're not going to do it again, are you, Chuck?" -- Photo Source: @HawkeyeFootball

This post aims to continue a recent theme here at Off Tackle Empire, but it is not focused on places that I, Hollywood Hawk Hogan, have puked. I'm honestly not much of a puker, largely because I was never the championship-caliber drinker many of you were in your college years (or your high school assistant-coaching years, apparently). Epic bong rips, despite their appetite-enhancing properties, are far less likely than alcohol binges to induce vomiting. So instead I thought our community of OTE "readers" might enjoy the story of the greatest vomiting incident in the illustrious 131-year history of the Iowa Hawkeyes. 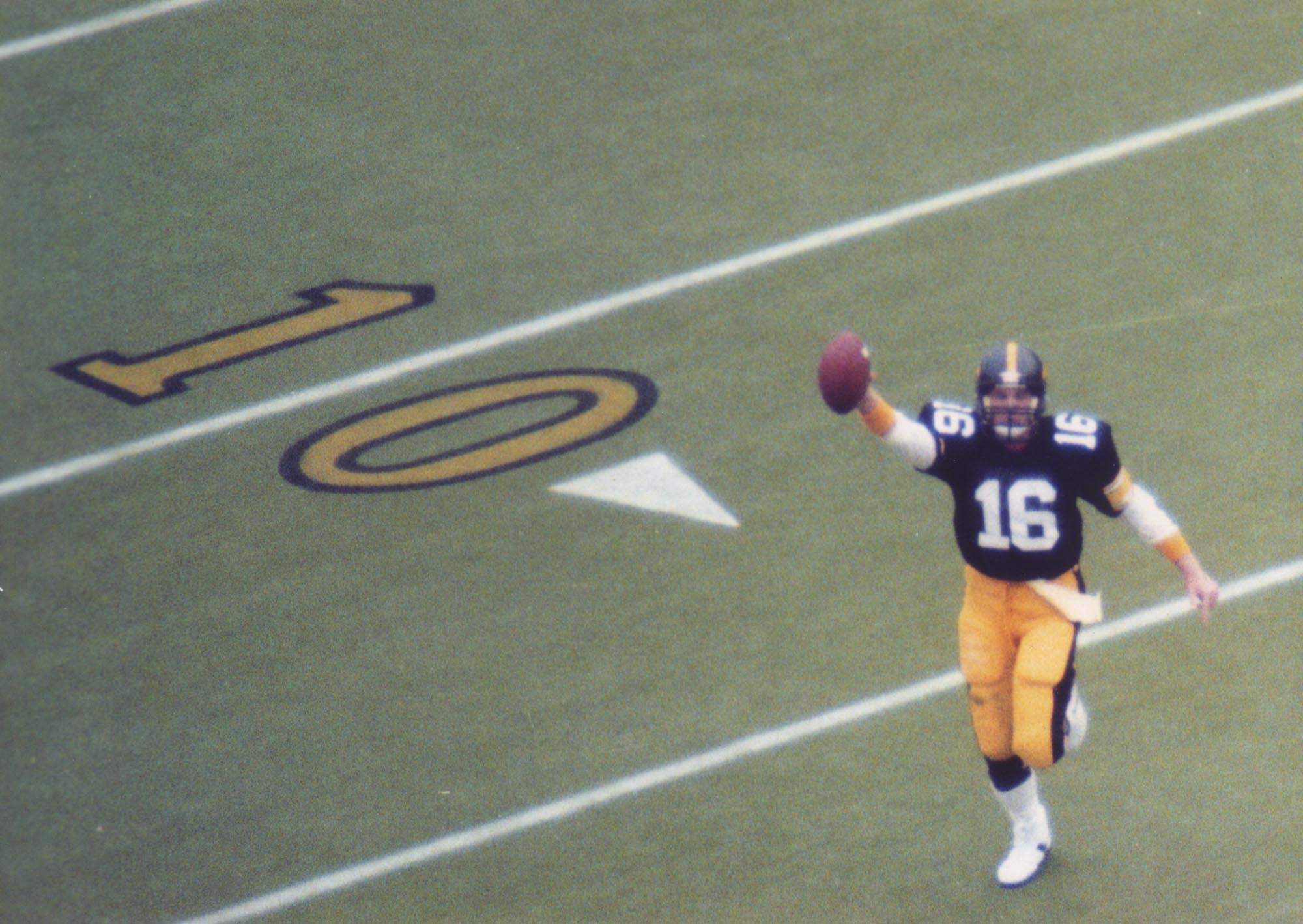 Got an hour or two to kill? Just say the words "NAKED BOOTLEG" to an old Iowa fan.
Photo Source: The Gazette/Richard Stump

If anybody was ever perfectly named to be a projectile-vomiting college football quarterback, it was Chuck Long. If the Hawkeye offense needed a big play, Iowa fans would call on him to "chuck it long." Was it third down with, say, eight or more yards to go? We called it "Third and Chuck Long" while feeling confident the Hawks would get the first down.

Yes, Iowans have a way with words. Iowa Writers Workshop yo! If you liked our Chuck Long puns, we also had a tight end named Mike Flagg! (Flagg on the field? Oh no, hope it's not against Iowa! Tsk. Tsk.)

One day in practice, third-stringer Long caught fire and completed 15 of 16 pass attempts. Afterwards, Hawkeye coach Hayden Fry told the local press that Chuck was "destined for greatness," which we know is always true of backup players who have standout performances in off-season scrimmages. By the end of his career, Long had amassed 10,461 passing yards and three First-team All-Big Ten selections, slaughtered some Texas Longhorns in the name of Freedom in 1984, and led Iowa to its first #1 national ranking in 25 years as a consensus All-American and Heisman Trophy runner-up in 1985.

Then he was drafted by the Detroit Lions and was never heard from again.

This story, however, isn't about the end of his career, but its beginning. 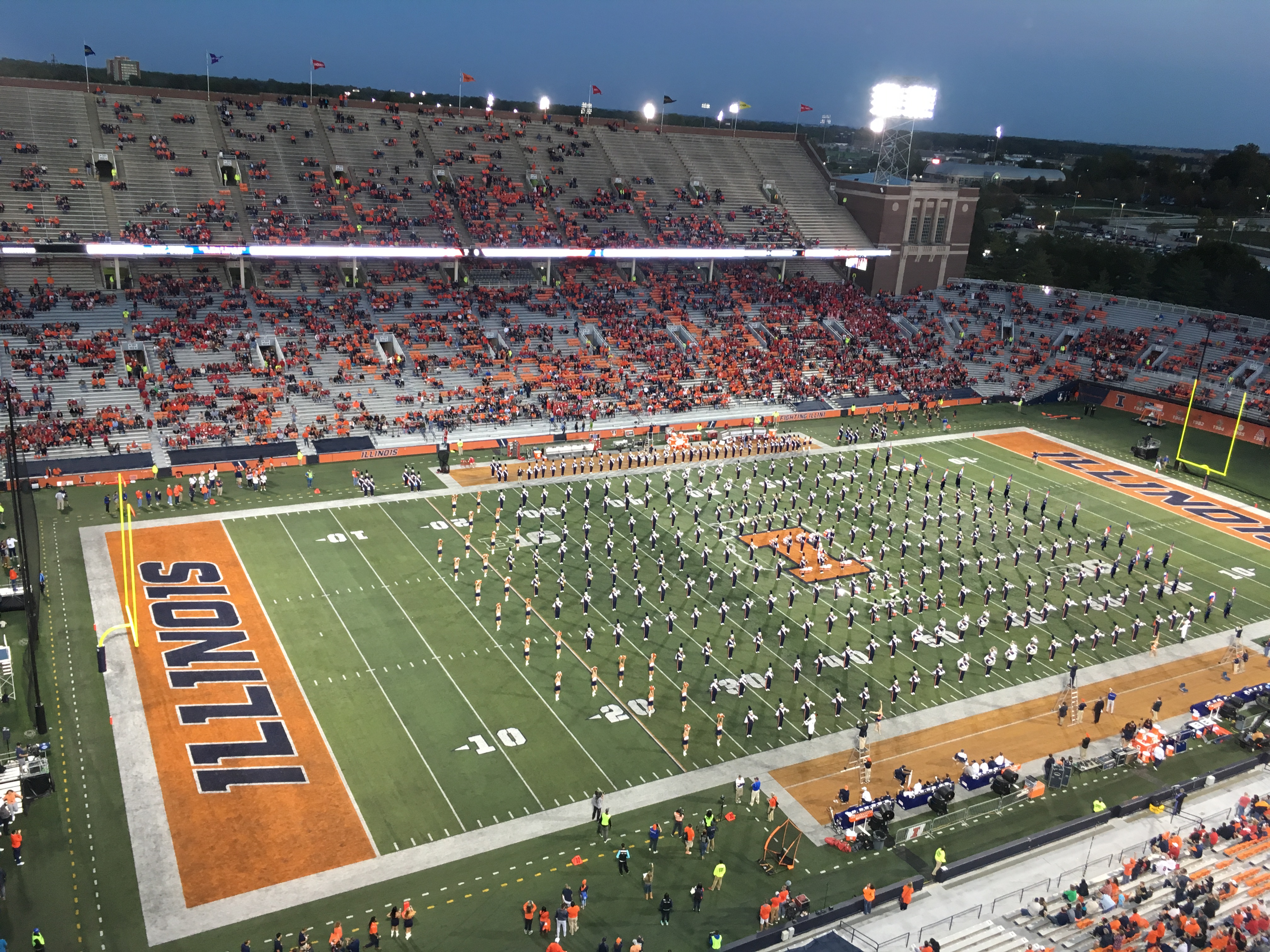 No, not that one. The one with fans in attendance. Photo Source: stadiumjourney.com 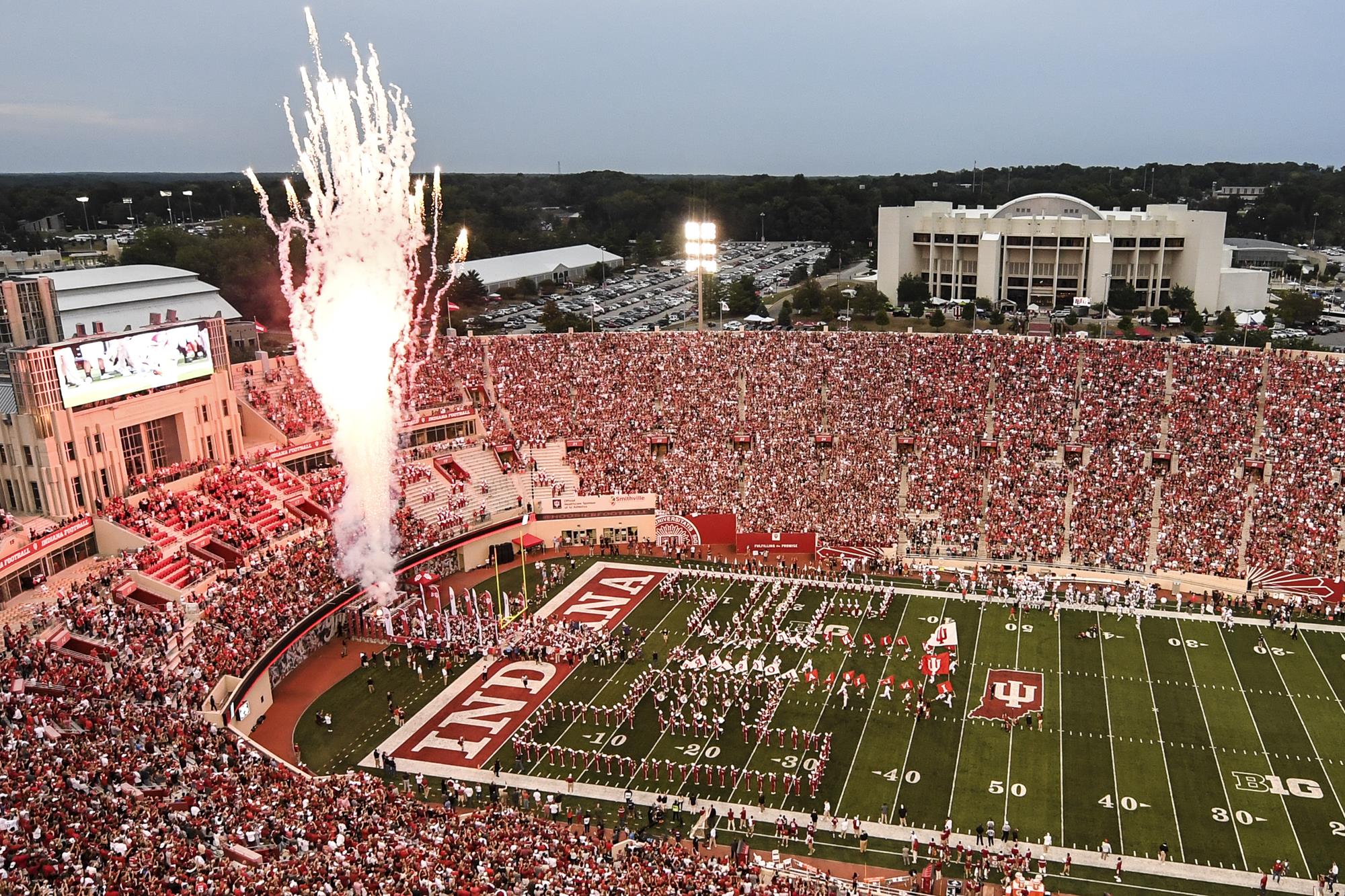 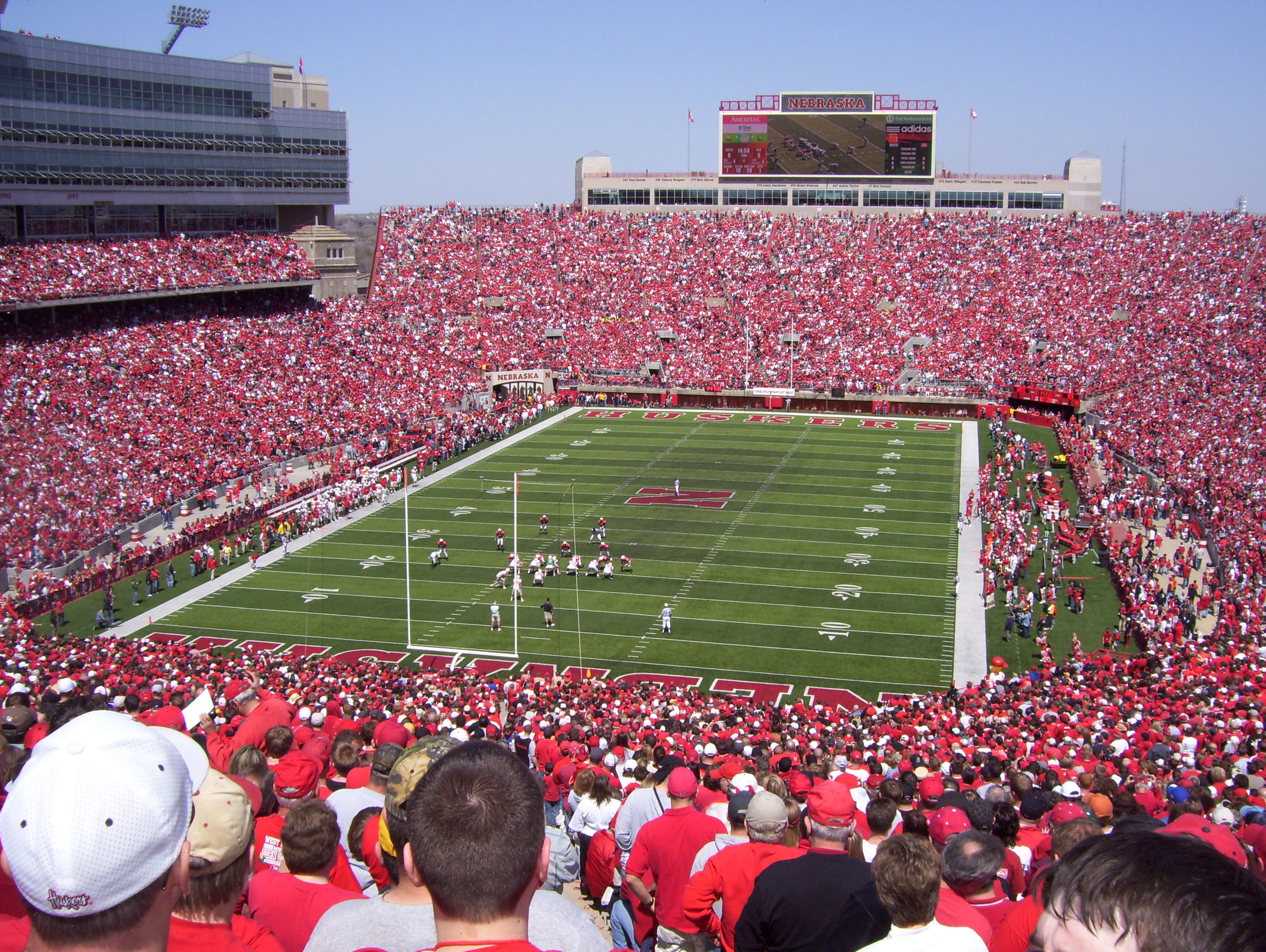 That's the one. Note the greatest-ness of the fans here. Photo Source: seniorcitizen.travel

People familiar with only the 21st-century version of college football may be surprised to learn that there was a time when Iowa's football team didn't win every game they played in Lincoln against the Nebraska Cornhuskers. 1982, though, was such a time.

Iowa, on the other hand, faced a massive rebuilding job, returning only six starters (not counting legendary punter Reggie Roby) from the 1981 team that shocked the college football world with a Big Ten Championship and a trip to the Rose Bowl. Coach Fry bemoaned his inexperienced 1982 squad's frequent mistakes*, leading to major setbacks like only beating Dennis Green's Northwestern Wildcats by a 45-7 score. (Includes bonus footage of a young Steve Tasker, later of Buffalo Bills fame, gaining all of Northwestern's 54 rushing yards for the day on a single play.)

In ordinary circumstances, Iowa's season-opening visit to Lincoln was bound to be a major challenge for the Hawks. However, the Omaha Stakes were raised even higher by Iowa's 10-7 upset win in Kinnick Stadium the previous year. Naturally, Osborne's squad was eager for revenge.

*Scroll down several pages in the linked PDF for the sportsball stuff ... unless you're more interested in the Tylenol murders or Congressional candidates debating Reagonomics.

Putting all these factors together, few people expected the Hawkeyes to leave Memorial Stadium victorious, and they didn't. To the great dismay of eight-year-old me and my family watching from the 98th row, Nebraska scored early and often, rolling to a 42-7 drubbing of Iowa, reinforcing Cornhusker fans' convictions that if their team ever hypothetically joined the Big Ten, they would immediately and easily dominate the league.

Cool! But that's not why we're here!

It was a very hot summer day in Lincoln, with temperatures reaching 110 degrees on the Astroturf field. "You can see waves of heat coming off of it," Long said. Using all the wisdom gained in his 19 years, Long decided that he ought to have a huge meal at the Hawkeyes' pregame buffet on this very hot day to ensure he had enough energy for the 4th quarter. "I ate everything in sight," he said.

Fast forward through three and a half quarters of getting sacked and otherwise harangued by Nebraska's defense (back when "Blackshirts" wasn't a punchline). Chuck Long wasn't feeling so good. He called time-out, to the great dismay of his coach, who was ready to run the clock out and get it over with. 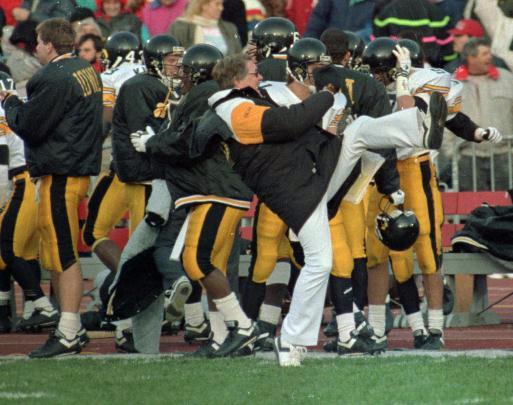 Hayden Fry and his famous white pants in a happier moment.

Slowy, a sound started to build up in Long's stomach: a strange and scary sound, like a cattle truck coming at you a hundred miles an hour. Suddenly, Chuck opened his mouth. Before Hayden Fry knew it, "I go over there and throw up all over his white pants and his shoes," Long said. "And he benched me right on the spot. He said, ‘Get out!’"

The women in the stands screamed. Bill Snyder took one look at Hayden's pants and barfed on Kirk Ferentz. Barry Alvarez barfed on a linebacker standing next to him. Dan McCarney barfed on George Kittle's dad.

But when the smell hit the crowd, that's when Chuck's pregame plan really started to fail. Kids barfed on their parents. The mascots barfed on each other. The saxophone players barfed on the Sousaphone players. And the Nebraska cheerleaders barfed all over the player's families. And Chuck Long just stood there in awe of what he created: a complete and total barf-o-rama.

Checking up on Chuck's Upchuck

This, of course, is a wonderful story, but further research into the events of that day raises many troubling questions. Which parts of the story are true? Which parts are made up or misremembered? Which parts are badly plagiarized from Stephen King?

If you examine the Zapruder YouTuber film of the incident and read contemporaneous accounts, inconsistencies in Long's story emerge. According to the Daily Iowan, Long was benched in the third quarter, not the fourth. Video evidence seems to confirm that Long left after throwing a third quarter interception, with Tom Grogan and Cornelius Robertson taking the rest of the snaps for the Hawkeye offense. Now we've all heard the "lone quarterback" theory, but how can you deny the evidence pointing to three different Iowa passers taking aim at the Husker defense that afternoon?

But there's another, even more mind-blowing inconsistency to Long's story. You can see it in the video, and you can see it in rarely seen photographs from the University of Iowa Library archives. This is the revelation that keeps me up at night wondering what is or isn't real. 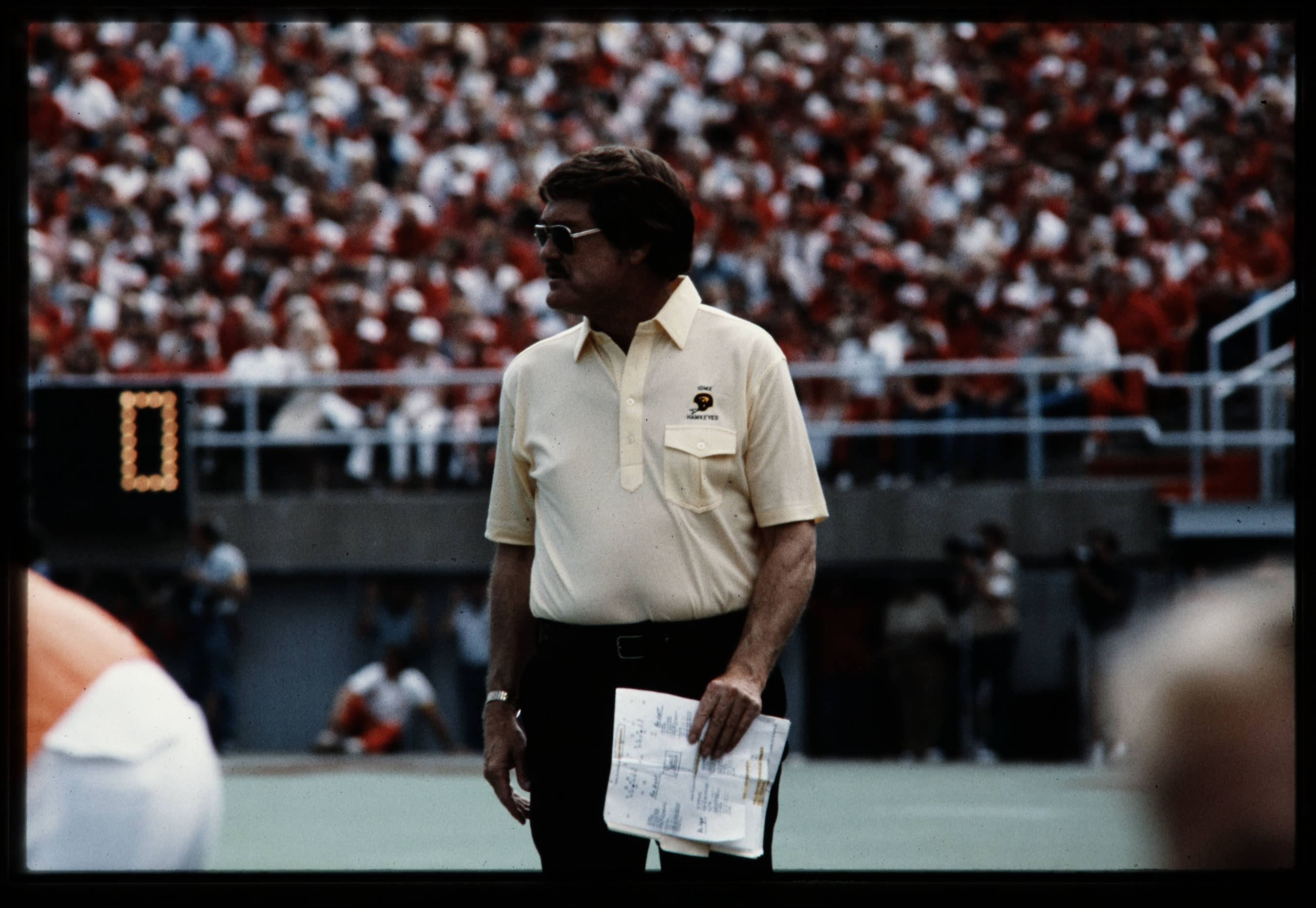 A shocking image of Hayden Fry wearing black pants and looking to the left while on the sidelines during the 1982 college football game between Iowa and Nebraska.

Yes, that is Hayden Fry on the day Chuck Long claims to have blown chunks all over Hayden's famous white pants. However, you can clearly see that Hayden was wearing black pants, and looking to the left.

What is your emotional reaction to this story?