B1G 2020: At Nebraska, one day student-athletes might actually make money on their Name (Image, and Likeness)

NIL is all the rage, and Nebraska is at the center of it... again

Share All sharing options for: B1G 2020: At Nebraska, one day student-athletes might actually make money on their Name (Image, and Likeness)

In some ways, the ongoing fight for NIL legislation aimed at evening the playing field for NCAA athletes has been tied back to Nebraska for a while. Sam Keller, a better Nebraska QB than most of us remember, was at the center of the offshoot lawsuit during the OBannon lawsuit that pushed for compensation because, well, I mean they sort of used everything but their names in the popular NCAA Football videogame. While that ended up getting settled out of court for a cool $40 Million, the race to understand what comes next has been on, and in January - a simpler time - Nebraska pushed to become one of the growing sets of states to pass NIL legislation in its state legislature, forcing more schools to think about how they would enable such rulings.

But, before we’re necessarily there and get into the arguments of, “PAWWWLL, THUR JUS GONNA GIV’ EM FAKE MONEY TO GO TO BAMA AND SAY ITS OK CAWS THEY SOLD THE SIGNUTUR!” To which, look, let’s look at the current currencies of name brand in 2020. According to research by Statista, here’s what the top end of social media earning - or basically the modern day NIL goldmine - looks like: 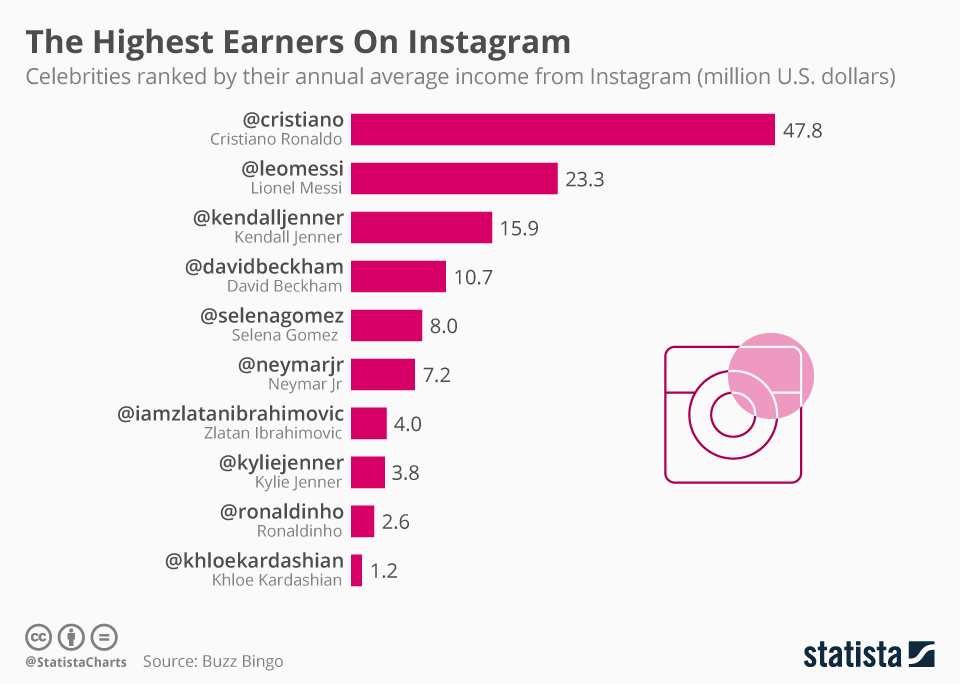 You will find more infographics at Statista

Instagram, a $20 Billion enterprise in and of itself, is where the money is, and while the days of doing commercials for pay was the dream scenario for any college athlete, the real opportunity is in self-promotion. But, that’s not really that easy, is it? I mean, if it were, we’d all be Instagram stars making steaks for adoring fans while like, opening toy boxes and showing off clothes and whatever it is Instagram people do to make money. The point is, influence is everything, and very few people have as much opportunity for influence as college athletes. How they monetize that will be the future.

So what does any of this have to do with Nebraska?

Like I said, it’s almost as if it always comes back to the Cornhuskers. For all of the many foibles, potential improprieties, and even just good luck Nebraska has had to be good in the past, it usually comes down to one thing — Innovation. Whether it was using scholarships in unique ways, pushing for Strength and Conditioning, a focus on nutrition, a change in recruiting strategies, etc., Nebraska has usually seen cycles of being good, that not working, and then having to come around with a new idea to attract kids to Lincoln. This time, however, they might be on to something really interesting.

In March of this year - what feels like seven years ago now - Nebraska officially announced a partnership with a homegrown company that was catching fire - Opendorse. Opendorse was started by former Huskers Blake Lawrence and Adi Kunalic. The basic idea was to create an easily managed platform to help athletes cash in on their own name, which seems really straightforward. Having an ability to reach out to networks, have connections to organizations who will pay them for posts, and a brokerage system for making money makes sense. What was more incredible was that the new “Ready Now” program would be for all 650 student athletes. They were preparing for the future, and maybe it pays off.

In June, FiveThirtyEight ran an article on what Nebraska and Opendorse were working on. If you got to the bottom, the numbers became really interesting, really fast. Adrian Martinez could be making over $150k a year from this platform, Lexi Sun could be making almost $40k a year, and the average Football or Volleyball player probably still hits four figure returns - a lot for most college students who cannot work - each year. While other schools are definitely racing to come up with similar partnerships, Nebraska seemed to be on the cutting edge of this one, and maybe it will work out.

In the 2021 recruiting cycle, it’s become clear that Frost and Company are not shying away from this program. While official NIL legislation isn’t finished, the future is clear - the NCAA has got to pave a way for student-athletes to monetize their own likeness. It’s an innovative approach and has the potential to pay dividends down the line. Opendorse is already a major partner with multiple professional organizations - including the NFLPA - and has the potential to really accelerate the transformation.

Sam Keller could only have dreamed of this type of scenario when he played for Nebraska - and Arizona State for that matter. While he will probably be best remembered for killing the best College Football videogame franchise, it’s important to remember how his actions set into motion what will be the next battleground for schools trying to outdo their peers. Everyone in the Big Ten has good facilities now, everyone has amazing television deals because of that, and everyone probably has the chance to get murdered by Ohio State as a best-case-scenario before maybe getting a Rose Bowl slot that OSU vacates to play in the CFP. But, if schools can figure out how to get kids access to making money? That’s a game-changer. It’s too early to tell if Nebraska will get huge returns, but it seems like a good risk to take.

Will recruits care about how well a school supports NIL legislation?