I rolled out of bed this morning to see that the Big Ten announced the 10th game for every team in the season that won't happen. All they did was make the conference's biggest problem, unbalanced schedules, even worse.

So I decided to take the idea of having 10 conference games and rearrange the FBS to eliminate unbalanced schedules, resurrecting the Southwest Conference and Big East in the process.

Link to a larger version of the image

Every conference would play 10 games, there would be no divisions, and the two highest-ranked teams would go to the conference championship game. This is how the Big 12 does it, now, but it'll be less stupid if everybody has to conform to the same standard. Could also add a 13th regular-season game while limiting individual players to 12 games apiece. 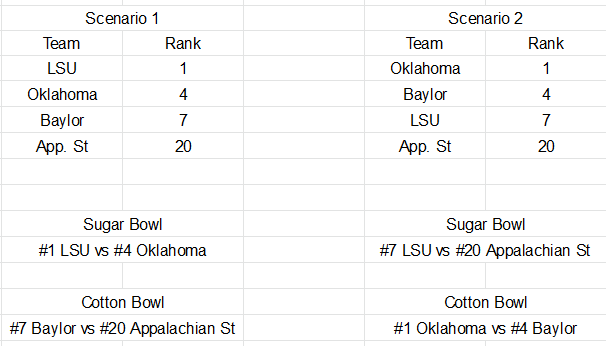 The champions of these 4 bowls would be seeded into the existing 4-team playoff. In the end, this system essentially creates a 16-team playoff.

There are many factors that make this system superior:

Thank you for coming to my TED Talk.