The question of which schools do the best job of retaining, developing, and graduating athletes that commit to them is an obvious area of interest for high school athletes weighing scholarship offers.

I’ve spent the past 18 months helping build a non profit organization that provides free, unbiased and confidential advice to current and prospective NCAA student athletes from an attorney and a former Division 1 athlete. Our organization has also been gathering data on which programs deliver successful, four year NCAA careers to their high school recruits.

But is there any correlation between having high school recruits in the program for 4 full years and results in the win column?

To try and answer this question I took a look at what is perhaps the toughest conference to retain student athletes in – the B1G Men’s Basketball Conference.

Men’s basketball typically has the lowest graduation rate of the sports that are individually tracked by the NCAA. The B1G, one of the most competitive conferences in college basketball, also tends to attract elite talent that is more likely to leave college early to pursue a professional career.

To measure how well each school retained talent, I went through the rosters of each team in the conference from 2010-2021 and identified every student-athlete that was on the team as a true freshman and was still on the roster three seasons later (academically, their senior year). I then divided the number of these 4th year, former true freshmen student athletes (4YFTF) by the total number of true freshmen that were rostered from 2010 to 2018. This produced a simple, but powerful statistic– the percentage of student-athletes who entered the program as true freshmen and stayed on the team for four years.

This percentage is most helpful to prospective student-athletes who want their NCAA competition to be part of a holistic, traditional, 4 year college experience.

But the number is helpful to more than just prospective student-athletes. It can be indicative of a winning program. Furthermore, the goal for college coaches should not just be to graduate the students who happen to be on the team during their last year of college. Coaches should be held accountable to help every high school recruit they sign to the full and successful NCAA career that was promised when the scholarship offer was made.

There was wide variety in how successful B1G Basketball coaches have been in providing 4 year careers to their incoming true freshmen:

One surprising note is how even the schools that were blessed with the most NBA talent (and one would expect the most early departures for the pros) fared in this metric. Michigan State and Michigan had 15 and 14 players drafted to the NBA from 2010 to 2020, respectively. The next highest number for any school was 9. Still, MSU finished with the 3rd highest average in the conference, while Michigan maintained a percentage that was about the league average. 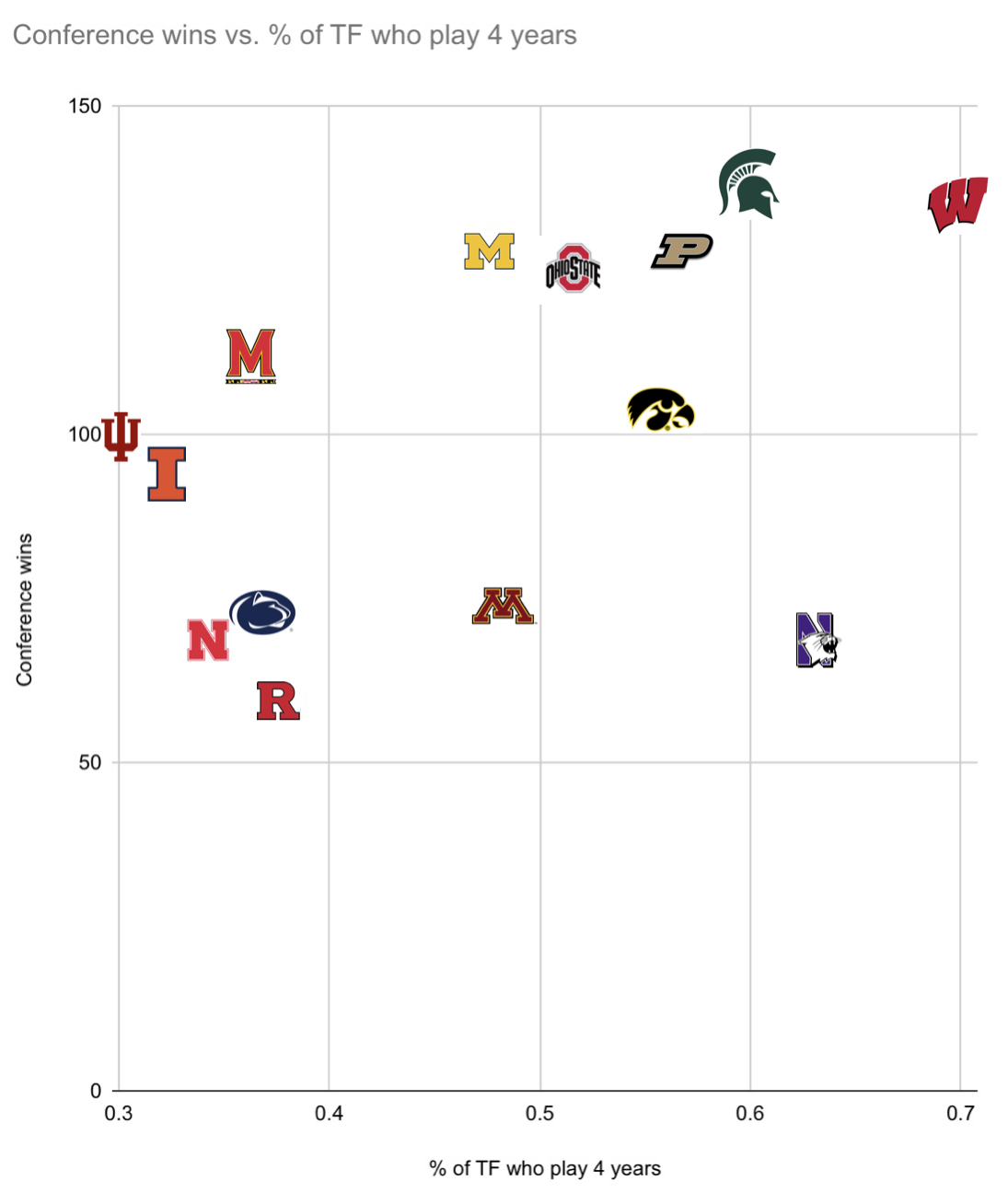 Conference wide, there is a positive correlation of .469 between conference wins and having a higher percentage of true freshmen who become 4YFTF. The school that most notably bucks this trend is Northwestern, a consistently bad team where lots of true freshmen stayed for four years. However, unlike every other B1G team, Northwestern is a private, elite academic institution with a small student body, where fielding a competitive basketball team is exceptionally rare (only one NCAA tournament appearance ever). For this reason, I like to think of the Northwestern basketball program as an Ivy League team that has somehow been put in the toughest basketball conference in the country, and dismiss the WIldcats as an outlier with unique circumstances. If Northwestern is removed from the data set, the positive correlation grows even stronger, to .667

Of course, even after establishing that a relationship, we’re left to wonder what causes the correlation. Do 4th year players win more, or does an environment of winning cause more true freshmen to stay for 4 years?

An article published in the Journal of Sports Analytics attempted to answer this question, at least with regards to postseason college basketball. The authors found that having more "experienced" players in terms of their class rank, did not lead to better outcomes in the NCAA tournament. However, the question hasn’t been answered when considering regular season success.

Anecdotally, it would appear that the most successful teams are not necessarily the ones most loaded with 4YFTF.

Michigan won 15 games both in 2013 and 2018, they had one 4YFTF combined in those seasons. Meanwhile in 2016 and 2020, they had five 4YFTY each year. They were less successful both years with 10 and 14 wins, respectively. Winning programs produce more 4YFTF, even if they don’t always have a lot of them in their most elite seasons. Perhaps this is because 4YFTF are the result of winning cultures and player development, rather than just elite talent. At the NCAA Division 1 Basketball level, elite talent doesn’t often stay for 4 years, the economic incentive to play professionally is too great. Simply, in order to actually win the B1G you probably need some players who are too talented to stay in school for four years.

However, non-NBA level players are more likely to maximize their stays at programs where there is a tradition of success. This explains the relationship between conference wins and the ability to keep true freshmen in the program for four years