What many of you may not know is that I am a well-known amateur historian. Much better known than the professionals that moderate this space.

In fact, I am so well known that when the Big Ten Conference decided to provide limited access to their archives for one historian in celebration of the 125th anniversary of their founding they chose me as the best historian on OffTackleEmpire.

Unfortunately, although this access was supposed to be granted in December 2019 to allow for sufficient time to search thru the existing documents and write a complete history for release on the day of the 125th anniversary, Nebraska was put in charge of extending this invitation and they managed to incorrectly address a mail envelope an astonishing eight times and then failed to provide the correct postage a further three times. Eventually the other universities noticed that I had not written of their glorious history on February 8, 2021, and they sent an email. The following is part I of the history of this great conference.

All spelling and grammatic errors are intentional to make Nebraska fans feel at home. Enjoy!

Researched and written by BoilerUp89 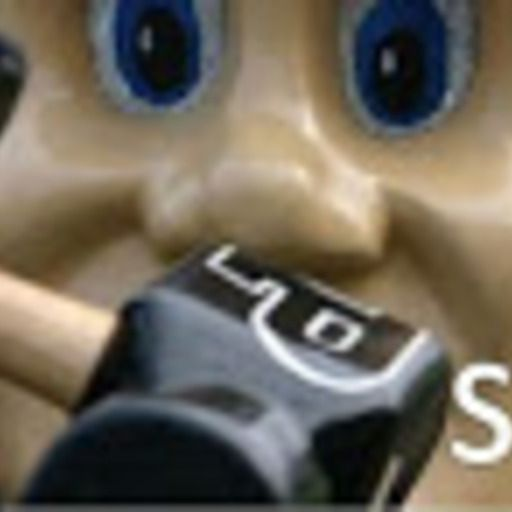 6 score and 5 years ago, 7 university presidents met in the great northern city of Chicago to discuss the regulation and control of intercollegiate athletics. Collegiate athletics had become a wasteland consisting of athletes that didn’t attend classes, paid players, and worst of all college football games against opponents that weren’t FBS universities (at the time these were called high schools). In many ways this past strongly resembles the modern-day Southeastern Conference. As any neutral observer of the present SEC can tell you, something needs to be done to confront these evils and on February 8, 1896, seven respectable university presidents from the top academic institutions in the country formed a perfect union to do so. 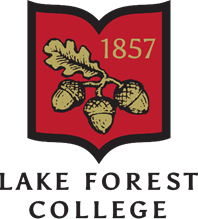 Which leads me into the first surprise the conference archives had for me. What has not been revealed until now was that then Notre Dame University president Andrew Morrissey was also invited to the 1895 meeting but was unable to attend as he had taken ill the previous week. This would mark the first of many, many times where good luck would prevent Notre Dame from joining the conference. During the 1895 meeting heated debates were held on athlete eligibility and the possibility of establishing an intercollegiate conference of faculty representation that could discuss and set policies and standards for all the agreed upon member universities. Although most of the university presidents agreed that something had to be done, none of them had made hotel reservations for that night and they had to adjourn the meeting to catch the trains back to their respective cities. They agreed to continue the discussion via correspondence, bring Notre Dame representatives up to speed, and meet again in the future once the details had been worked out. 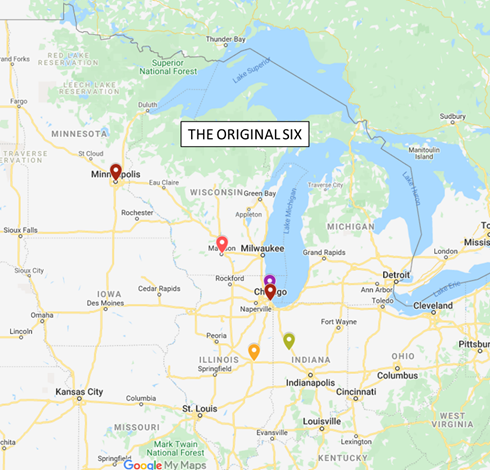 During the months that followed, telegraphs and letters flowed from each of the university president to the others. As they built the framework of a league charter, Lake Forest College faculty decided they would not be participating as they had begun to hear rumors of a dark nature about Minnesota University (more on this later). Determined that they would be able to convince Notre Dame University to join once they had a charter in place and desiring to have an even number of members, the university presidents pressed on with their work but replaced Lake Forest University with an invitation to the University of Michigan. This was the first of many mistakes on membership invitations that the Original Six would make.

But why Michigan? They were located significantly far east from all the other prospective conference members and even in 1896 their alumni had already developed a reputation for being terrible humans. Again, we have the archives to thank for giving us an answer. The desire to recruit Notre Dame was so strong among the university presidents that Michigan was chosen as the university most likely to convince them to join. Since there were no railroads (similar to how there are no roads today) between West Lafayette and South Bend, Ann Arbor would represent a natural travel partner for South Bend cutting down on the costs of their conference membership. The ploy appeared to have worked as Notre Dame president verbally committed to attend the next gathering of university presidents. 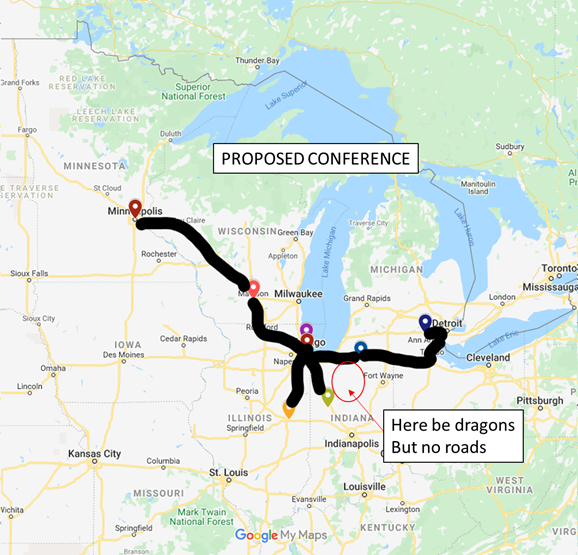 As the details fell into place and the charter was drafted the university presidents planned to meet on February 8, 1896. The decision to meet on February 8th was proposed by Wisconsin to honor the birthday of General William Tecumseh Sherman – the great Union Civil War general that had taught traitors to this country about the meaning of loyalty and perpetual union. Wisconsin believed so strongly in the Union cause that their university would eventually play football at a Union Civil War camp. Naturally being loyal patriotic American citizens, the other universities agreed to honor Sherman. Furthermore, although Sherman had died in 1891, the university presidents also agreed in a 7-1 vote to award him the posthumous honorary title of first conference commissioner. Illinois had proposed that Lincoln should be given this title, but as the Land of Lincoln university they were seen as biased and it was felt that a strong Union general from a state that one of the universities wasn’t located in would be more unifying.

Finally, the day arrived and the university presidents once again gathered in Chicago to sign the charter and officially create the conference. Upon arriving though, they received a telegram from the Notre Dame University president explaining that he had heard the same rumors about the University of Minnesota that had caused Lake Forest to drop out of the proposed conference. These rumors (completely true by the way) were that the University of Minnesota concealed a cult within their ranks that sacrificed human limbs to a demon golden animal statue. As a Catholic university, Notre Dame felt they could not belong to an organization that the University of Minnesota also belonged to. Although disappointed and angered at Minnesota, the representative from Chicago gave a short speech about how they had "… seen the [sic] future and Chicago would one day become death, the destroyer of worlds. In comparison to Chicago’s dark future, how could anyone move to disbar Minnesota?" Shaken by these rantings of the University of Chicago, most of the representatives began to pack their things and move towards the doors to leave. Before they reached the doors however, the Northwestern University representative spoke up and reminded the others why they had come together in the first place: to band together in teaching the traitors of the southeastern states that the Midwest remained stronger than them and that a union of likeminded friends would always be stronger than a loose confederacy. After this speech, Northwestern rang a bell for their servants to bring them another crystal chalice of Malort. Moved by Northwestern’s impassioned arguments, the other presidents in attendance were convinced and agreed to adopt the below 5-point charter: 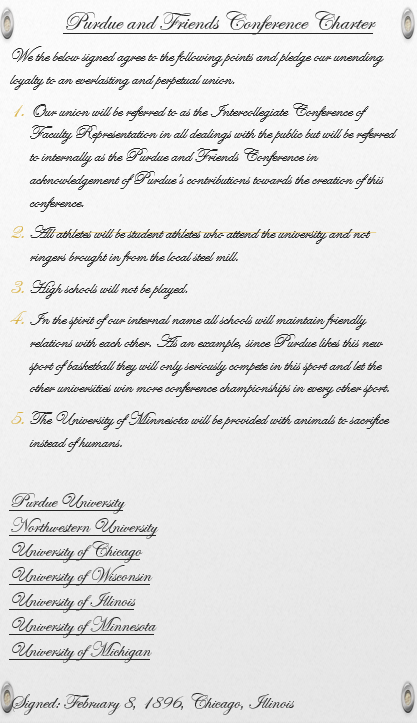 A photocopy of the original document

It should be noted that rule 2 would later become known as the play school clause. Rule 4 would only be seriously followed by Purdue and they would take punitive measures when another member university took a lead in their respective all-time basketball series. Rules 3 would be broken many times and Minnesota would continually ignore the spirit of rule 5 and sacrifice the healthy limbs of athletes in the conference in addition to animals instead of as the intended replacement. But these are all stories for a later part of the story of the Purdue and Friends Conference. In that story the media would begin to refer to them as the Western Conference and eventually they would evolve into the modern conference known as the Big Ten Conference. Never again however would they relive the glorious moment of February 8, 1896. Everything that happened afterwards was a mistake. Next time on The History of the Big Ten Conference it’s Part II – The First Conference Expansion (1897-1910).