What we assume is a vigorous argument over the Monty Hall problem. - Joseph Maiorana-USA TODAY Sports
×

Like many of OTE's posters and contributors, I am an academic by occupation. As someone with training in both history and political science, I've had some exposure to game theory, which is a way of using mathematical modeling to predict human behavior under varying sets of circumstances, and with varying degrees of information.

At the core of game theory is the notion of risk vs. reward. Social scientists use the fancypants phrase "Subjective Expected Utility," which is an overly-complicated way of saying "What is your expected outcome if you take action X in situation Y?"

The most well-known game theory contest is what's called the "Prisoner's Dilemma." The premise for the Prisoner's Dilemma is that each of the two players is a suspected criminal who has been detained for questioning by the police. The police have enough evidence to convict both players on a minor charge (which will lead to a short jail sentence for both). But in order to convict on the more serious charge, the police need at least one of the players to confess--finking out their partner in the hope of receiving a pardon. If both suspects remain silent, they each receive a short jail term. If one suspect confesses, while the other remains silent, then the one who confesses goes free, while the one who remains silent receives a lengthy prison sentence. If both suspects confess, then both serve a prison sentence, but a shorter one than either would've served had only one of them confessed. 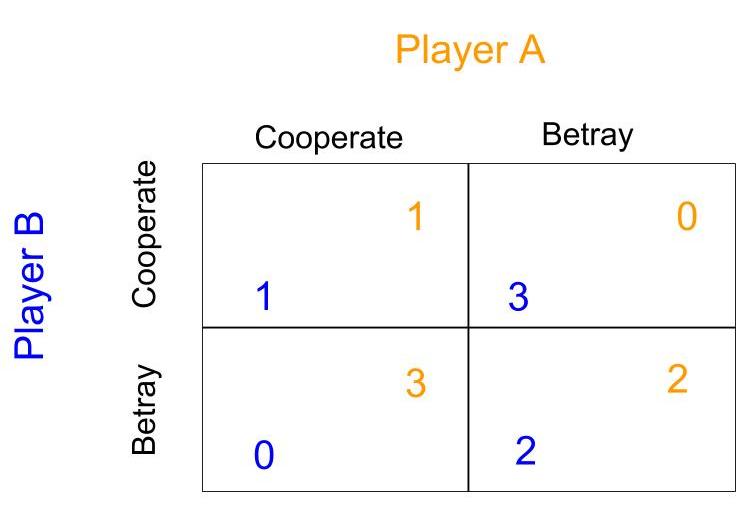 In a one-off version of the Prisoner's Dilemma, the logical choice for each player is always to "defect" -- to confess to the police. This is because the outcome for that player is always better if he confesses, regardless of what the other player does.

However, if those interactions are repeated (we call these "iterated" or multi-round contests, because social scientists never use simple words when complicated ones will do), they're influenced by what's called "the shadow of the future." My favorite study of game theory is Robert Axelrod's 1984 book The Evolution of Cooperation. Even if he did work at the University of Michigan when he wrote it. Axelrod points out that in a situation where players expect to have repeated interactions, patterns of cooperation can emerge, because the aggregate outcome for both players will be better than either would receive if they were repeatedly backstabbing one another. One of the case studies that he uses to illustrate this is the emergence of a series of informal, yet nevertheless highly effective, localized truces between German and Allied soldiers in the trenches of World War I. It's a fascinating chapter, and I highly recommend it to anyone who's interested. 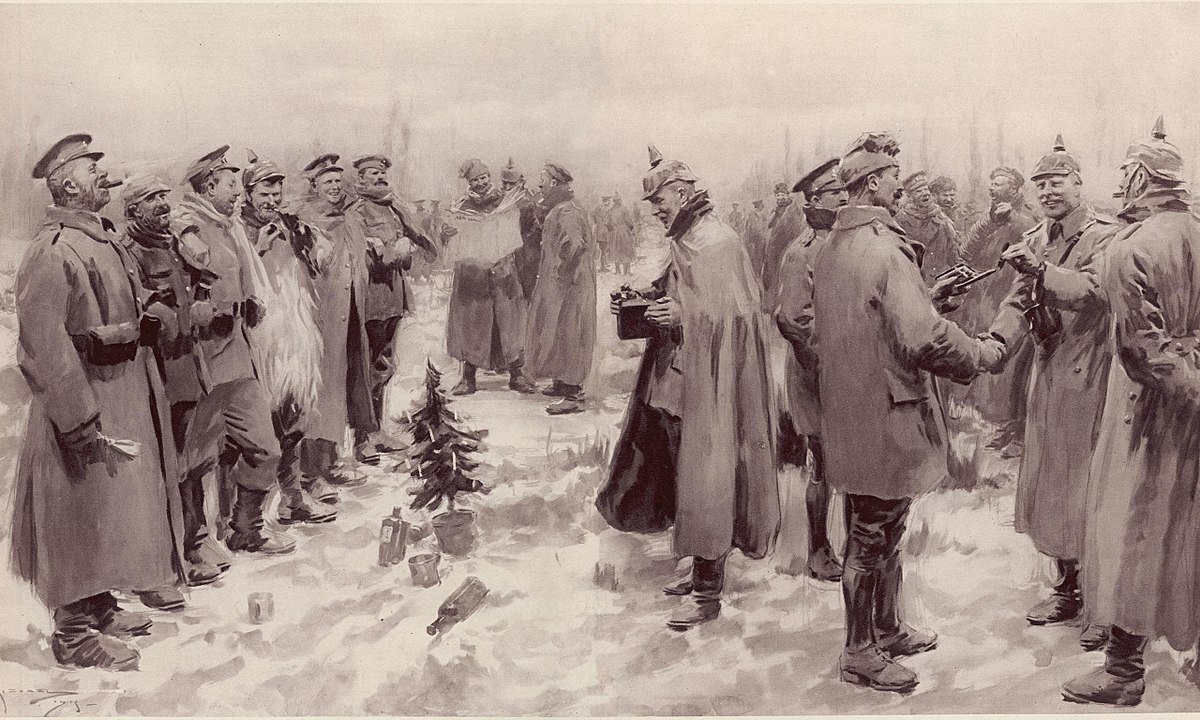 German and British Soldiers talking and exchanging gifts on Christmas Day, 1914. Before they got back to the business of trying to kill one another like civilized people.

So what the hell is this message doing on a college football fan site? Did I get lost? Am I drunk?

No, and, regrettably, no. There is a point to this, I promise.

Watching football as a fan offers many opportunities to observe the decision-making processes of individuals in situations that are simultaneously competitive and, oddly, cooperative. It's a great opportunity to observe how good coaches are at managing complex tasks such as balancing risk and reward--or, in the case of blowout games, steering themselves through an iterated version of the Prisoner's Dilemma.

These are two slightly different things. And, friends, I have to report that in this writer's humble opinion, college football coaches, even those who are considered to be among the best in the business, are not very good at either of them.

Let me offer two illustrations, and I'm going to start by picking on my own team. During the fourth quarter of the Wisconsin game, after Wisconsin had scored a touchdown to cut Ohio State's lead to 45-14, Ryan Day sent C.J. Stroud and the entire first-string OSU offense back onto the field. The result was a precise, methodical march, culminating in a touchdown pass from Stroud to Emeka Egbuka. From a purely clinical, technical viewpoint, it was a thing of beauty.

As an Ohio State fan, I did not enjoy this drive nearly as much as I should have, because on every snap, I was holding my breath, staring at the screen, anticipating that when the play ended, one of OSU's important offensive cogs would be lying on the ground, clutching at an extremity in pain. When Ohio State scored, my emotional reaction was not happiness, but rather relief.

This is because that drive, in my view, showed very poor risk-reward calculus. The value of scoring one more touchdown against an already-beaten Badger squad was outweighed by the risk of injury to players that OSU is going to need to have 100% healthy later in the season. When the CFP committee is meeting to do playoff seeding, it's going to make less than no difference to them if the score of that game was 45-14, 45-21, or 52-21. A time comes when the point has been made.

So Ryan Day has some work to do here.

But his risk-reward shortcomings are nothing when set alongside Greg Schiano's. Since his return to Rutgers at the start of the 2020 COVID season, Greg Schiano has committed enough blatant violations of the basic assumptions of game theory to get him flunked out of a first-year political science seminar. 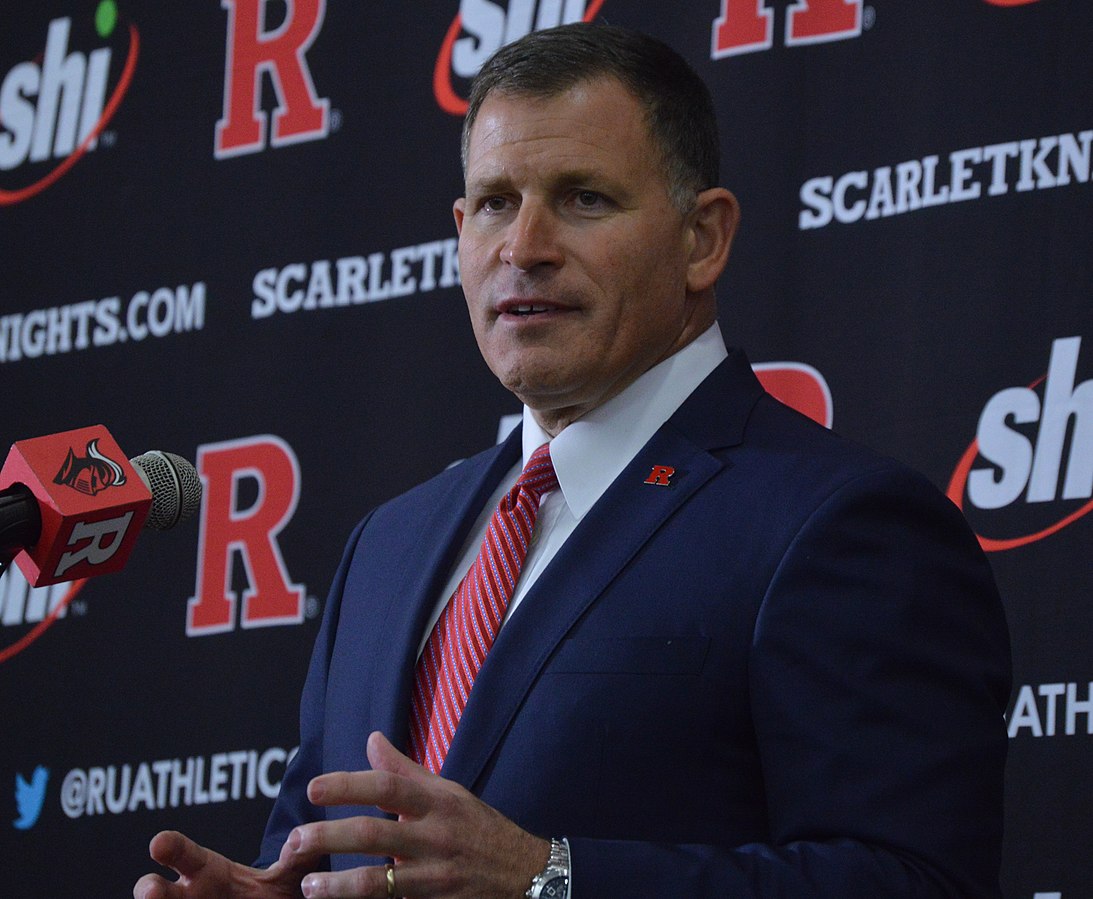 Football contests between vastly-mismatched teams are, in a lot of ways, a wonderful example of an iterated Prisoner's Dilemma contest, because, while it sounds strange at first, the interests of the two teams overlap in ways that should make cooperation possible. The favored team wants to build a sufficient lead to impress the pollsters, get its starters out of the game, and get its backups some useful experience. The underdog would like to not get hammered into a puddle of goo, so that it can focus its limited resources on games it has an actual chance of winning.

The informal, unspoken gentleman's agreement in such games usually looks something like this: Both teams give it their best shot early. But when the superior team's talent has had the chance to show itself, and they've built an insurmountable lead, they pull in the horns, pull their starters, and don't rub the weaker team's noses in the dirt unnecessarily. That doesn't mean they quit trying. If your backup quarterback throws a touchdown, or your third-string running back busts a big gainer, so be it. But most fans can tell when a favorite has taken its foot off the gas pedal.

In return, the weaker team doesn't do anything that would serve to embarrass the squad that's showing them mercy. Again, that doesn't mean that they quit trying. It might even be okay to leave your starters in against the favorite's backups. But you don't reach deep into the bag of tricks to try to get some cheap scores, because a) It might mean that the next time you play that favorite team, they really are determined to grind you to paste, and b) Because it's really, really dumb from a game-theoretic standpoint.

Here's where Greg Schiano's lack of respect for game theory's teachings becomes visible. He has a well-deserved reputation for stockpiling a lot of trick plays, some of which are actually quite clever (others less so, like whatever the hell that fourth-down play was that he tried against Michigan in the first half of the 2021 game). But he has an equally well-developed track record of picking poor times to run them.

Emptying one's trick-play arsenal in a game against a massive favorite is, from a risk-reward standpoint, a bad idea--particularly when you're already trailing by a massive amount. Why? Because even if every single one of them works to perfection, the result is that the underdog loses by four touchdowns, rather than by six.

But what if instead, the underdog keeps those plays under wraps until the right situation to use them emerges in a game against a team that is closer to their weight class? A well-timed trick play that catches an opponent off-guard when the underdog team is hanging around in a close game could make the difference between victory and defeat. And every win that the underdog coach can notch gets him one step closer to getting his next contract, and lets him continue the Sisyphean labor of building a winning program at Rutgers (or, you know, wherever).

So I'm going to conclude this treatise with a plea to fans of all programs, titans and humble underdogs alike. If you're the fan of an underdog program, send your coach a copy of The Evolution of Cooperation, and urge him to familiarize himself with the notion of the iterated Prisoner's Dilemma. If you are a fan of a power program, implore your coach to wrestle with the vital concepts of risk vs. reward, and know when the time has come to swaddle your vital first-team players in bubble wrap, and stash them safely on the bench where they belong, particularly in the fourth quarter of blowouts.

Unless, of course, it's Your Most Hated Rival you're blowing out. Because nothing says fun more than running it up on those guys. That's a part of our sport, too.