To the unbiased, the argument that 94/95 Nebraska is better than 1994/95 Penn State is obvious. But today I want to take it a step further. I would argue that the 94/95 Penn State Nittany Lions, the undefeated 12-0 juggernaut, wasn’t the 2nd best team in the country. They were 3rd, and I think you'll agree with me here in about 1400 or so words.

Sometimes, in football debates, you have to look past the X’s & O’s, and look closer at the Jimmy’s and Joe’s.

Wait a second! Damn! That sounded amazing...I think I just made up a new football cliche! Someone should write that down and attribute that to me. (Editors Note: Jrod most definitely did NOT make that up...but since no one knows who said it first, Texas of course tries to claim it. Attributing it to Coach Darrell Royal. However, Joe Gibbs is quoted as saying "You don’t win with X’s & O’s, you win with players", so he should get most of the credit, even if his shitty version doesn’t rhyme. But since it’s origin is unknown, @Jrod39 is now officially claiming ownership of the phrase. Because F***Texas.)

Lets get into it: 94/95 Penn State had some ballers- enough said. You’ll get no arguments here, 97/100 coaches agree that they would trade their skill players for 94/95 StatePenn's skill players. In fact, PSU had 5 (FIVE!) offensive All-Americans on that 95 team.

(While not an AA, as he was only a freshmen, SHOUT-OUT to Joe Jurevicius because that dude is nails and clutch! NY GIANTS RULE! Let the record state: I have no bias.)

But remember 77 words ago, when I said "97/100 coaches would trade (probably their own children) to have PSU’s skill players?"

What about those 3 coaches who wouldn’t have traded skill players with StatePenn?

3. Hayden Fry - because he just loves his players too much to trade them and going 5-5 is pretty good for a 90’s Iowa team.

Now - Take Notice of what else PeenState didn’t have:

(They did have a Very Offensive Defensive Coordinator, but I digress)

The Nittany Lions definitely had a roster of ballers.Anyone who says otherwise hasn't read this far or skipped the part where I listed their offensive weapons. But you know who else had a bunch of ballers? (You think I’m about to say "Nebraska", right? Well, Yes, of course Nebraska, but we’re not there yet! We still have to compare PSU to the 2nd best team in 94)

They had 7 (seven!) All Americans.

Tony Berti on the Online.

THAT OFFENSE WAS DISGUSTING. If they had aired it out more, they could have put up stupid numbers. But they let Salaam do his thing and let Michael Westbrook do his cocaine.

Huh, sort of looks like Penn State...Same positions, but perhaps...Colorado’s players are even better?

Plus, Colorado also had 2 All American DB’s with Hudson and Myers, something JoPa didn't have....

Like PeenState, Colorado beat Michigan for a top 10 victory, but unlike Penn State, Colorado won TWO games against Top Ten Big Ten teams. (Editors note: Wait. How does Colorado... wait- I thought you said there was a Top 10 B1G team that Colorado beat but Penn State didn’t. Penn State was undefeated, right? Are you sure you don’t need to fact check this? This was 25+ years ago... was Colorado in the B1G?)

The other Top10 Big Ten team that year was Wisconsin. They came to Boulder with upset on their mind, but Colorado wasn't having any of it. Salaam ran for 4 TD’s, Kordell Stewart threw for over 300 yards and 2 TD’s and they routed Wisky, 55-17. (It was 48-17 in the 3rd Quarter)

Penn State didn’t play Wisconsin. My insider told me that his source told him that one of their insiders claimed JoPa said Wisconsin was too scared to play them. (Editors Note: Jrod, you know that’s not how NCAA football scheduling works, we’ve been over this!).

I did some research of 1994 college football player skill rankings, sourced exclusively from the only UNQUESTIONABLE EXPERT: 1994 Bill Walsh College Football for Sega Genesis. If you are unfamiliar with the game, its the one where Kordell Stewart plays like a combo of Mike Vick (but faster) Peyton Manning(but with a better arm), Lawrence Taylor from the original Techmo Bowl♦ and Oddjob from Goldeneye:007. (Editors Note: He said that because only a**holes play with OddJob in Goldeneye or Colorado in 1994 Bill Walsh College Football).

BWCFB94’s Kordell Stewart was the fastest player in the game and you couldn’t really ever catch him...but, if you tried, he could also throw it 80 yards down field to the 2nd fastest offensive player in the game, the UNcoverable Michael "I Catch Anything with White Lines" Westbrook. Also, you could sub in Kordell as your kicker and recover 9/10 onside kicks with him so technically, Colorado's defense didn't matter much in that game. It was one of only 2 flaws in the entire game. The second flaw was when they made Tommie Frazier about as fast as Peyton Manning, Those are my only 2 disagreements with the game after 28 years.

Sorry for the digression, where were we?

And now we are at Nebraska. And yes, Nebraska had some ballers, baby!

And Tommie Frazier wasn’t even one of them. Insanity!

Kordell Stewart got the token "athletic" QB spot on the AA roster that year. (Some of you guys are probably too young, but the 90’s were a different time where QB’s were expected to stand still in the pocket and take their licks like a man. Avoiding pressure was for Commies & Socialists.)

So- Yes, the eventual National Champion, Nebraska, is unsurprisingly loaded with talent.

Honorable Mention: NFL Legend Cory "I have no neck" Schlesinger at FB. Seriously, he has no neck. 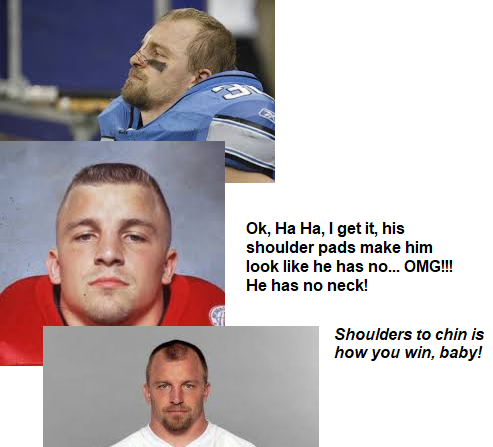 Cory Schlesinger HAs No Neck

Holy S***! This team is like 2001 Miami for NFL talent... or most of Nick Saban's team's at Alabama.. Here are the NON-AA players from that Nebraska team who went on to play more than 5 seasons in the NFL:

I would list all of the Huskers on that squad who went on to the NFL, but I had to leave it at players with 5 years or more because the full list is too long, and I’ve already made this obvious argument far too wordy.

So- I think even the Nittany-est of us can agree that the best comparison we have to Penn State is Colorado. And I think we have discovered that Colorado is probably deeper and more talented. And we DEFINTELY know that CU had a better defense than the Fighting Sanduskys. .

So were there any head-to-head match ups between the these top 3 teams? As a matter of fact, yes, yes there was.

Oh, and Nebraska's starting QB, Tommie Frazier, was injured, so the Huskers did it with a little known backup QB, Brook Berringer, (RIP) starting his first ever game... on the road... at #2 Colorado.

Colorado had the fire power, the incredible skill players, and...Nebraska shut their S*** DOWN! Even without their leader, living legend-current Bowling Ball, Tommie Frazier.

I don’t see how anyone could argue that Penn State, on a Neutral Bowl site, would have done any better. And that is why PSU should be HAPPY with their final ranking of #2, because anyone who does the research would agree that Colorado should have been #2, and Penn State really should have been #3 at best.

TL;DR - 94 Penn State was probably the 3rd best team in the country that year.

* Actually, feel free to @ me at @Jrod39, what is wrong with you people, get on Twitter!

**that Oline, including Graham and Treu, were best known for paving roads for our running game, but also, never giving up a single sack in their careers. Yes- We still passed 10-20 times per game, thank you. This isn’t the Scott Frost/Eric Crouch years yet.